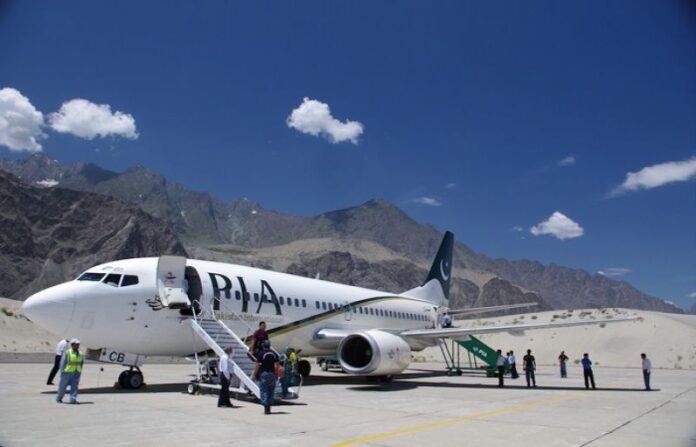 ISLAMABAD: Pakistan International Airlines on Saturday launched its first safari flight for Skardu from Islamabad, offering travellers a scenic journey with stunning views of some of the world’s highest mountains and a picturesque northern region.

91 travellers from 13 countries were aboard the maiden flight including Minister for Energy Hammad Azhar in his personal capacity, Associated Press of Pakistan reported.

The Sadpara Air Safari flight, named after iconic high-altitude mountaineer Muhammad Ali Sadpara, will brief the passengers about the wonders of the country’s north and the secret of tourism including K2, Nanga Parbat, Broad Peak and other mountains in the region.

The air safari will take tourists from Islamabad to Skardu, charging a one-way fare of Rs24,000.

“Our flight will depart from the Islamabad International Airport and fly over K2, Nanga Parbat, Gasherbrum peaks, Deosai Plain and the famous Saif-ul-Malook Lake where every passenger will wonder at the beauty of the air safari from their personal window seat,” said an official statement.

Per the reports, after landing at Skardu Airport, the passengers will be able to enjoy complimentary hi-tea at the Shangrila Resort Hotel.

The departing flight will take off after two hours. However, “it will be entirely up to our passengers if they want to take the same flight back to Islamabad or prolong their trip to the region to experience more magical moments,” PIA spokesperson Abdullah Hafeez Niazi told Arab News.

Another spokesperson for the airline said that the move is aimed at attracting more tourists to the turquoise lakes.

“Many of them are not aware of the beautiful and scenic locations of the country. Once they experience the air safari and fly over these places, they will surely come back to explore them again.”

Niazi further said that the airline would only sell window seats.