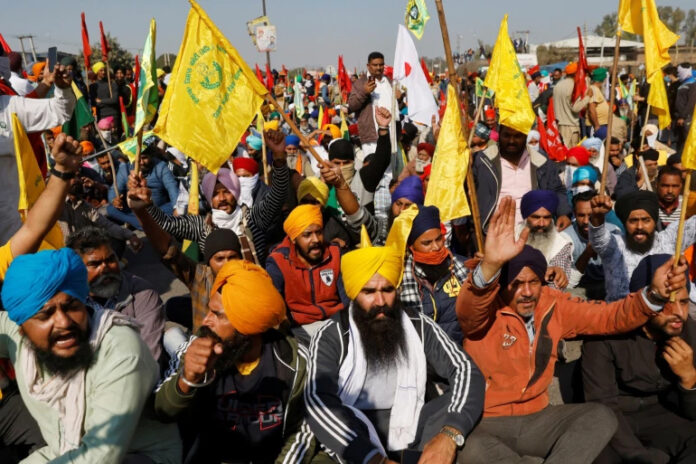 An Indian farmer, Jaswinder Singh Gul, lives in a house built by his grandfather years ago. Jaswinder Singh is one of the millions of Indian farmers today worried about their future as economic catastrophe nears. Gul, a mechanical engineer by profession, had invested what he had earned in 20 years, in his family’s 40-acre farm in Indian Punjab. His village is a few miles from the Pakistan border. His land is a bit sandy, but he harvested a good rice crop for the last 15 years with the help of generous government subsidies to farmers.

There were strange dreams in his eyes that like him, his son and daughter, the sixth generation of this family, would also work hard in these fields and earn their livelihood. Then, suddenly, his farm underwent a dramatic change. BJP PM Narendra Modi’s government introduced new laws for farmers last year. Under them, the government’s role in the Agriculture Department has been severely limited. The laws’ main purpose was to implement a new system in a country where a plentiful crop of paddy was grown but its citizens were still forced to eat substandard and malnourished food.

The protests intensified because the majority of farmers feared the new laws would eliminate subsidies and disrupt markets. Under the new rules, farmers will not be able to take their disputes with buyers to court. Farmers cite an attempt made 15 years ago to deregulate agriculture in Bihar. Proponents of the laws say they will increase production, but economists and farmers believe they will fail in Punjab

Why have Indian farmers been protesting against those laws for the last several months? Because they can darken the future of Jaswinder Singh, and millions of farmers like him. India’s agricultural commodity markets are controlled by the government, but once these laws are enacted, the government’s role in running them will be greatly diminished. Farmers fear that that reduced role will be a major blow to the prices of the crops they produce, as the government gives them a hefty subsidy on the prices of their crops, making agriculture a lucrative occupation.

If the government withdraws from subsidizing agricultural crops, the livelihoods of millions of farmers who depend on these lands and fields will be jeopardized. They are convinced that the government is planning to give them as hostages to the corporate sector. Jaswinder, 56, does not know what could happen to him in the coming days. He asked what else could a person do in his age group? The fire PM Modi has set across the country through these new laws is proving the biggest and most difficult challenge of his rule. Thousands of farmers have been protesting outside New Delhi for the past four months. They are from Punjab and other states, India’s largest agricultural producers. Many farmers have also gone to the Indian Supreme Court, which has suspended them and ordered the government to take steps to resolve the issue. The government is using all possible means to sabotage the protest. It has removed theInternet facility to cut off protesters’ access, trying to stifle online criticism.

Now the issue is that the farmers are continuing their protest and the government is standing firm. What is the real cause? That is the subsidy on agricultural commodities. The government, economists and farmers agree support prices will end once these laws come into force. The government acted hastily to end the subsidy and immediately used its power to get these laws passed. Farmers say that after the implementation of these laws, the entire country’s agriculture will be destroyed, although the majority in Indian villages is engaged in agriculture. Devendra Sharma, an independent economist in Chandigarh, says, “India is in dire need of change in the agricultural sector, but it cannot be done.”

At present, the total population of India is 1.3 billion, of which 60 percent depends on agriculture, while the agricultural sector accounts for 11 percent of total economic activity.For the majority of rural people, there is no other option for employment. Official figures show that the manufacturing sector has shrunk slightly since 2012, while the workforce has increased. “Our hard-working non-agricultural workforce is growing rapidly, and everyone is looking for a job,” says Jyan Jose Thomas, an economist at the Indian Institute of Technology in New Delhi.

The current system is obsolete. It was introduced in the 1960s to avoid famine, encouraging farmers to grow rice and wheat. The government had set a minimum selling price so they  could make a profit by selling whatever they produce. “Work hard and get as much produce as you can,” Jaswinder Singh said, citing government instructions.

The government had given full guarantee it would pick up every single grain produced. In government-sponsored markets, crop prices were set. Here the farmer and the buyer meet. Grain is dried, stored and sold here. The proceeds from the fees are spent on rural infrastructure projects, farmer’s pensions and other programmes that provide free advice to farmers on seeds and fertilizers.

Thanks to this system, which uses the best technology, the use of machinery and stiff competition has greatly increased the yield per acre. Basmati rice is more widely grown in India than traditional rice and wheat. When subsidized rice is sold on the world market, it creates tension in the member countries of the World Trade Organization.

On the other hand, according to the Global Hunger Index, 19 million people in India are forced to eat less nutritious food. In India, surplus grain is produced in districts from where it is very difficult to transfer it to other provinces. The government food ration system is not capable of delivering grain to the desired states before it decomposes. The government is not in a position to buy all the food produced by farmers.

This imbalance does not end there. Price support from the government saves large farmers from losses, but small farmers are destroyed or are often forced to commit suicide. The highest suicide rate is in Indian Punjab. Much of the area is dry and farmers grow traditional rice, which requires a lot of water. The water level in the area is falling due to over cultivation of wheat and rice. Jaswinder Singh once tried to grow basmati. It is more fragrant and nutritious. It requires less water, grows faster and has a better price in the world market, but government price laws do not apply to it. “When I wanted to sell basmati rice, the trader refused to pay the full price,” said Jaswinder.

According to Modi’s plan, the role of corporate buyers in Indian agriculture will increase significantly as he believes that if Indian farmers have the option to sell outside the market to a private buyer, it will increase their income. Exports will also increase. The protests intensified because the majority of farmers feared the new laws would eliminate subsidies and disrupt markets. Under the new rules, farmers will not be able to take their disputes with buyers to court. Farmers cite an attempt made 15 years ago to deregulate agriculture in Bihar. Proponents of the laws say they will increase production, but economists and farmers believe they will fail in Punjab. Many farmers in Bihar sell their produce in Punjab markets for a good price. Affected farm owners are now forced to work in Punjab’s fields. The haste with which the agricultural laws have been changed shows how much Modi likes such dramatic changes which have provoked outrage all over India.

Punjab farmers and local authorities want a gradual change in price subsidies. Farmers in Bhagwanpura said in an interview that they were afraid their lands would be taken away from them and they would not get any employment. “I am not afraid of hard work, I can do anything, but I am afraid that I will not get a job,” said Rajwinder Kaur, a widow  farmer. “Our land was sold because I had to buy a lot of medicine for my sick husband,” she said. “We now have only half an acre left, while every farmer in India has an average of two and a half acres. Now my two children and I barely have anything to eat.”

The bulk of our income is spent on repaying the seed and fertilizer loan. I repay this loan every six months, but the actual amount is never reduced due to interest. If this land of mine is sold, I will be forced to beg.”

All the farmers involved in the protest have left their family members to work in the fields behind them. The cost of the protest is being borne by all together. Jaswinder has donated his tractor trolley and money has also been donated. He thinks saving his land is his family’s problem. This farm was built by his grandfather who migrated from Pakistan after the partition of India. Farmers were prosperous with crop subsidies and now own a good deal of land. Jaswinder Singh took over in 2005 after which he spent all his saved money on improving its irrigation. He has bought a machine to pick crops and a pair of tractors.

As he was talking, a call was coming from a loudspeaker at a Sikh gurdwara near his fields. “This is what we are taught every day from the gurdwara,” Jaswinder said. “Work hard, worship your God and share every benefit with the whole of humanity.” CCTouching his heart, he said, “My heart knows what is happening here. I must keep all this in my heart.”

Fahad Siddique
The writer can be reached at : [email protected]