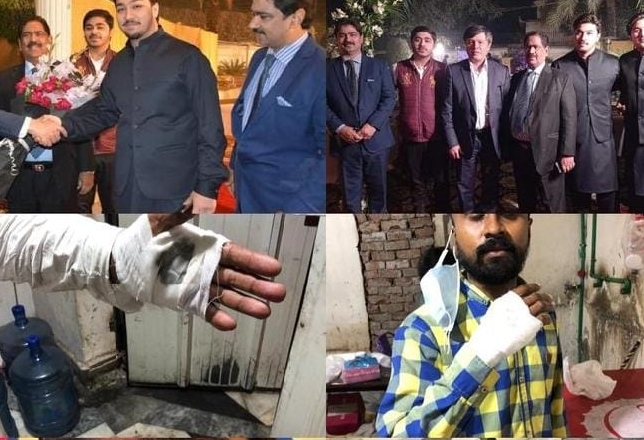 LAHORE: Pakistan Tehreek-e-Insaf (PTI) leader and Punjab Bait-ul-Mal Chairman Malik Mohammad Azam’s son Malik Mohammad Ahmed along with his friends and personal security guards attacked and injured the staff of a restaurant in Lahore on Friday.

The residents of the area informed that Ahmed was driving a government-owned vehicle with his friends and bodyguards when his car collided with a motorcycle in a street of Gulberg area. While looking for the motorcyclist, Ahmed and his friends entered the Gully Bites restaurant and stormed the kitchen staff and severely beat them up.

An eyewitness to the incident said, “Last night, the son (Ahmed) of Punjab Bait-ul-Mal chairman and his friends stormed the kitchen of Gully Bites restaurant and severely beat up the kitchen staff. Ahmed, Gulfam, Tahir and their friends were looking for an employee from another restaurant in Ahad Arcade, when they entered the Gully Bites’ kitchen and started thrashing its staff without any reason. They were carrying guns with them and tried to even open fire on the spot. Luckily, a gun was captured by the restaurant staff and later handed over to the concerned police inspector, when he arrived at the scene.”

“The staff resisted and managed to defend themselves during the attack. One member of the staff had fallen unconscious for a few hours. He is out of danger now after getting treatment. Despite having absolutely nothing to do with Ahmed or his group, the employees were severely beaten up.”

The footage and photos of the incident, received by Pakistan Today, clearly show how the restaurant staff was brutally attacked.

Speaking on condition of anonymity, an official of the Gulberg police station informed that the police arrived at the scene as soon as the incident was reported.

The staff said the owners of restaurants informed SHO Mohammad Waseem that their staff had been subjected to torture, but the SHO continued to act reluctantly, intimidated the restaurant owners that the other party is too powerful, and returned the gun to Ahmed even without any investigation.

When Ahmed and his friends saw that the restaurant management would not hesitate to take legal action against them, they assured the management that they would apologise to the staff and compensate them so that the matter could be settled.

“At the same time, Ahmed received a phone call and told the SHO to talk to his CCPO. After talking to the SHO on the phone, Ahmed, his accomplices and guards agreed to a compromise instead of apologising and withdrew from compensation commitment,” the staff added.

However, after all these arguments, an FIR was registered in favour of Ahmed and against the staff of the restaurant under sections 147, 149 and 382. 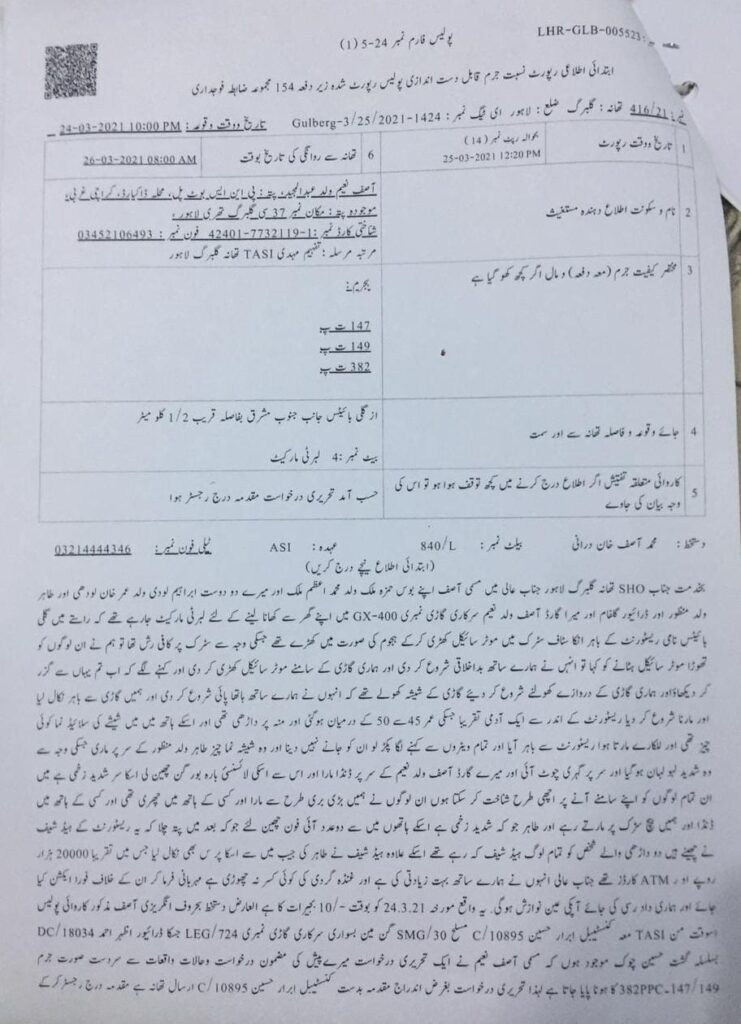 “What is the fault of the Gully Bites’ staff, who were beaten up by these thugs, who are now using political pressure against the staff? These workers were serving and trying their best in coronavirus pandemic. But now they are badly injured and not being paid any compensation,” a worker of the restaurant expressed his grief over the situation.

WHAT HAPPENED WITH SHO?

Another interesting move was witnessed, when the SHO was suddenly changed from the police station.

Sources in the police department informed that the SHO had tried hard to please the Bait-ul-Mal chairman but he was transferred due to keeping Ahmed in the police station for some time.

On the other hand, another police official told that the SHO’s transfer was a routine affair as four to five other SHOs of the city were also transferred. “Wasim’s removal has nothing to do with the incident. Hamad Butt has taken charge of the police station,” the official said.

Talking to Pakistan Today, the restaurant owners said that they would take legal action in the incident and register an FIR against Ahmed and his associates.