Denuded of the last vestiges of its moral base, the opposition loses ground 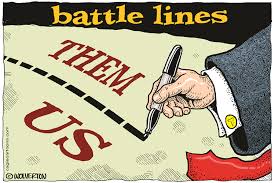 pick up all your defeats

and fling them all into the sea!

look how the birds fly

in search of newer victories!”

The day of March 12 dawned with an unbearable clatter raised by the opposition parties to have discovered cameras fixed inside the polling booths. They were shrieking themselves hoarse alleging that this was proof of an attempt by the government (read establishment) to steal the election. They threatened to knock all doors in their bid for seeking remedy.

Later, when result for the election of the Senate Chairman was announced declaring Sadiq Sanjrani as the winner with a tally of 48 votes against 42 by the opposition candidate Yousaf Raza Gilani with eight declared invalid, this noise rose to a crescendo. This time, they alleged that the votes which had been rejected, and which allegedly were cast in favour of their candidate, should also be added to the tally, thus declaring him the winner. Their plea was rejected by the returning officer.

The new battle lines are drawn. In Punjab, it is going to be between a withering PML(N) and a buoyant PTI which would have gained further ground by the end of the term. The other battle is going to be in Sindh which PPP would be desperately trying to save to continue their plunder. They lost considerable part of the urban base to the PTI in 2018. The battle, this time around, would be fought in the rural centres which have remained captive of the Bhutto syndrome. The PPP would be in an excessively belligerent mould fighting a battle for its survival

The real surprise came in the election for the Deputy Chairman of the Senate where the opposition candidate could secure only 44 against 54 by the government candidate Mirza Mohammad Afridi. That meant that some votes were knowingly wasted during the election for the Senate Chairman, but these were later openly cast in favour of the government candidate for the Deputy Chairman slot. That speaks of a rebellion by some of their own people against their respective parties.

By the end of the day, PTI and its allies had romped home with both positions in the Senate, thus making the opposition get a taste of their own medicine. But, more importantly, they had enhanced the prospect of successfully legislating for bringing in reform for the welfare of the common people and advancing the sovereign stakes of the state. This, inter alia, would knock the wind out of the opposition sails as their politics of agitation would likely grind to a halt with divisions within their ranks adversely impacting their self-seeking unity as also their plans for upstaging the government.

Since coming into power, PTI government has been handicapped because of not having the majority in the Senate. With a bellicose opposition hell bent on sabotaging the government efforts for cleaning up the system, it was at a standstill in its resolve to improve things in the country. Half-way through the 5-year tenure, PTI government now has a majority in both houses of Parliament, thus enabling it to advance its agenda for providing relief to the common people.

Having been denuded of the last vestiges of its moral base in getting the necklace thief elected to the Senate, the opposition is constrained for options. It could take the case to the Supreme Court (SC), or it could plan a fresh strategy to re-launch its ship. Both these prospects could fail: the former for SC not being the right forum for remedying their Senate election woes and the latter for already having failed in spite of taking the confrontation to a feverish pitch. In such an event, and with little combustion material left to push their agenda forward, divisions are likely to surface within their ranks whose signs have been visible for some time. The constituent parties have continued to push their respective strategies forward: while PML-N and JUI-F have been advocating resignations from the assemblies followed by a long march towards Islamabad, it is PPP which has advocated for working within the system by moving a vote of no confidence against the government at an appropriate time.

With a 54-44 vote against the candidate for the slot of the vice chairman of the Senate, the opposition parties are seemingly on the verge. With their say inside the Parliament having diminished greatly, their recent performance in public has also not been noteworthy. The rally staged in Lahore– the bastion of PML(N) support- at the pinnacle of their politics of agitation proved to be an unmitigated disaster. That is when PPP stepped in with its proposal of trying to bruise the government inside Parliament. With the results of the Senate election, that strategy may already have backfired.

In spite of a series of setbacks, I don’t think the opposition would still be in a mood to relent. This is rooted in my appraisal that this fight is not between two parties, two groups, or even two people. It is actually a fight between two very different thought processes. Having skinned the country naked through their over 30 years of combined misrule, the opposition remains rooted in perpetuating their spree of crime and corruption which has been the hallmark of their governance. On the other hand, Prime Minister Khan is committed to freeing the country from such kind of exploitation. His success would not only mean the elimination of some people from mainstream politics; it would actually sound the death knell for their degenerate brand of thinking altogether.

PTI’s difficult time may actually be over. They now have the numbers to carry forth their reform agenda. This should encompass electoral and judicial reforms together with initiatives to bring quick relief to the people. Even in the past, Prime Minister Khan tried to do this on numerous occasions by inviting the opposition to join ranks with the government to improve the system. Since that has never been part of their agenda, their stress has been on the opposite: to render the system even more dysfunctional to serve their cause of perpetuating loot.

Perched at the opposite ends of the spectrum, there is little likelihood of the opposition changing its approach. So the confrontation may intensify further, but this will be increasingly to the detriment of the opposition. If, in the meanwhile, the government is able to deliver on some of its key commitments, the next elections could be a walk-over for PTI. This is a likely scenario which will begin to unfurl in the coming weeks and months.

On the other hand, the parties of the opposition may be left with nothing to stay united. Some of them are likely to break away from the coalition, preparing for entering the 2023 election arena to prove their respective worth. With PPP making a bid to reclaim part of Punjab, it is the PML(N) which will be seen fighting to secure its base camp. Then there will be a resurgent PTI which, having ruled the province for a complete term of five years, will have its roots dug in deep.

The new battle lines are drawn. In Punjab, it is going to be between a withering PML(N) and a buoyant PTI which would have gained further ground by the end of the term. The other battle is going to be in Sindh which PPP would be desperately trying to save to continue their plunder. They lost considerable part of the urban base to the PTI in 2018. The battle, this time around, would be fought in the rural centres which have remained captive of the Bhutto syndrome. The PPP would be in an excessively belligerent mould fighting a battle for its survival.

The PTI’s success would depend on what it is able to achieve in the next 30 months. The battle begins in earnest now that it has the numbers to deliver.