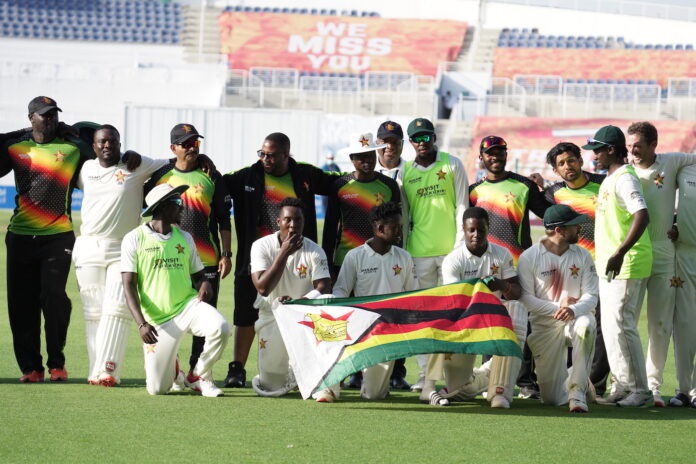 ABU DHABI: Zimbabwe sauntered to a big win over Afghanistan in the first Test meeting between these two sides, which lasted just two days, in Abu Dhabi. After bowling Afghanistan out for scores of 131 and 135, Zimbabwe needed just 17 runs to win and got them unscathed in 3.2 overs in their second innings.

Zimbabwe’s captain Sean Williams, who brought up his third Test century and second as captain, and 19-year-old Afghan opener Ibrahim Zadran, who top-scored for his team with 76 in the second innings, showed the application required to craft an innings on the given pitch. Solid defensive technique was a must and any errors in length could be punished, which they both did.

No other batsmen on either side managed more than 44 runs, with only four Zimbabweans other than Williams getting into double figures and one other Afghan player, Afsar Zazai, making more than 30. Eight Afghan batsmen were dismissed for single figures in their second innings, five of them for ducks. Neither Zimbabwe nor Afghanistan played Test cricket for a year before this and the struggles of their batsmen was as much an illustration of the dearth of long-form cricket as it was an indication of the comparative strength of their bowling styles. Zimbabwe’s quicks Victor Nyauchi, Blessing Muzarabani and Donald Tiripano shared 16 of the 20 Afghan wickets among them while left-arm spinner Amir Hamza took a career-best 6 for 75, his second successive five-for in Tests.

Ultimately Williams, and the two half-century stands he shared with Sikandar Raza and Regis Chakabva, proved to be the biggest difference between the two sides. While Raza and Williams stabilised Zimbabwe from 38 for 4 on the first day, Chakabva’s proactive presence helped push Zimbabwe into a commanding lead, while Williams acted as the fulcrum around which the innings was build.

Williams lost his overnight partner Ryan Burl in the second over of the second morning, but Chakabva transferred pressure back on to Afghanistan. He scored 24 runs off the first 34 balls he faced, and struck Zimbabwe’s only six.

Williams’ approach had been watchful throughout and he scored 11 runs in 22 balls in the morning before he had the opportunity to drive Yamin Ahmadzai through extra cover. Ahmadzai thought he had Williams caught behind on 70, and there seemed to be a sound, but umpire Ahmed Shah Pakteen was unmoved. But, Afghanistan did find a way to break the partnership. With less than 15 minutes for lunch, Zahir Khan drew Chakabva forward in an attempt to defend a ball that took the inside edge onto the pad and to Abdul Malik at short leg.