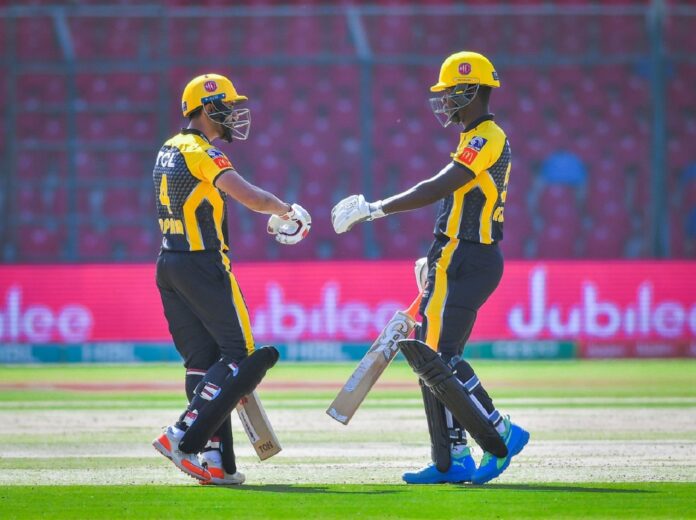 KARACHI: Early into the second innings, it finally seemed like a side batting first would win a game in PSL 2021. However, it was not to be as frequent dropped catches from the Peshawar Zalmi fielders combined with individual fifties for Babar Azam (77 not out) and Mohammad Nabi (67) secured Karachi Kings’ comfortable victory at the National Stadium. Kings’ win briefly takes them from fourth to first on the PSL 2021 points table. It also takes the streak of chasing sides winning to 13 in as many games.

When Mohammad joined Babar in the seventh over of the chase, the Kings were struggling at 43 for 3 in a chase of 189. But, they made full use of the chances offered by the Zalmi fielders to add 118 runs over the next 9.3 overs. After Mohammad’s dismissal in the 17th over, Dan Christian then played an unbeaten cameo of 16 en route to hitting the winning runs, thereby completing a redemption arc for the Australian, having conceded 32 – the most expensive over in PSL history – in the last over of the first innings. It was a fitting end to the contest that a misfield for four brought an end to the game.

There were some positives for the Zalmi, though, who were playing without regular captain Wahab Riaz (back niggle), Imam Ul Haq and Mujeeb Ur Rahman. At one stage in the first innings, they too were struggling at 69 for 4, and that they reached 188 for 5 was courtesy a 40-ball 58 from Ravi Bopara – who came into the XI for this match – and a 32-ball 46 from Sherfane Rutherford.

With Imam dropped from the XI, Zalmi had a new opening pair of Kamran Akmal and Tom Kohler-Cadmore. Together they got off to a positive start, adding 30 for the first wicket but in the fifth over PSL debutant Abbas Afridi – who was Pakistan’s highest wicket-taker at the last U-19 World Cup – got the breakthrough. Having troubled Akmal consistently in his first over, Abbas, who is former Pakistan quick Umar Gul’s nephew, bowled a short ball that the batsman hit straight to third man. Four balls later, Abbas removed the struggling Kohler-Cadmore for 10 when the Englishman mistimed a flick to Sharjeel Khan at midwicket.

Youngster Mohammad Ilyas then struck with the first ball of his match in the next over when stand-in captain Shoaib Malik was trapped lbw. That reduced Zalmi to 34 for 3, after which Ravi Bopara and Haider Ali looked to cobble together a partnership. Although Abbas kept them quiet, the duo took on Imad Wasim for a 16-run eighth over but the stand was broken when Christian got Haider’s wicket in the tenth, caught deep behind square on the leg side.

At 69 for 4, the Zalmi were in big trouble, but their two overseas players Bopara and Rutherford changed the innings’ complexion. Soon after, the Zalmi were past three digits and their partnership of fifty was reached in 40 balls. The fireworks then came out as Zalmi hit 79 off the last five overs. Rutherford’s back-to-back sixes off Ilyas bookended the 17th over. Bopara then reached his fifty off 38 balls in the 18th with a boundary. And when Rutherford fell for 46 in the in the 19th over, Zalmi had gone past 150. However, a score of 150-odd got a major boost in the final over when incoming batsman Amad Butt smacked 32 off the 20th. The hard-hitting allrounder hit three fours off the first three legal deliveries, then hit a six, and after Christian had to rebowl the final delivery due to five wides, Butt smacked a six to end the over, taking his personal tally to 27 off seven and Zalmi’s score to 188 for 5.

A TOP-ORDER COLLAPSE FOR THE KINGS:

The momentum of a positive end to the first innings had rubbed off on the Zalmi, and when the second innings started they struck first ball wicket the wicket of Sharjeel. Looking to pull Mohammad Imran, Sharjeel found Mohammad Irfan at short fine leg. Irfan then got among the wickets when he got a length ball to Joe Clarke to angle across, only for the Englishman to poke a catch to the wicketkeeper.

The quick two wickets, though, did not deter Babar from playing his shots. He punished loose balls from Irfan for back-to-back fours and then hit Saqib Mahmood for a four down the ground to keep the scoreboard ticking. However, he saw a third batting partner walk back when the out-of-form Colin Ingram mistimed a pull for a catch on the leg side. At that point, Kings were 43 for 3 and in a real bother.

Mohammad had shown early signs of being in pristine touch with the bat with a boundary off Butt and a six off Umaid Asif to start aggressively. In the 11th over, with his personal score at 20, he was dropped by Butt at deep midwicket. Not only did that dropped chance go for four, but Mohammad hit the next ball for six to move to 30 in the space of two deliveries and took the run-tally in the over to 21.

Having dropped Mohammad at the boundary, Butt then faced the full brunt of his mistake when he took the ball in the 14th. Mohammad hit him for consecutive fours and a six in the space of three balls to bring up his 28-ball fifty and ended the over with another four to take 18 off the over. Midway through the 15th over, Babar picked Asif’s slower ball nice and early and deposited it into the crowd. The mid-overs assault from the two brought the equation down to a gettable 63 off five overs.

Butt’s nightmare in the second innings, though, was far from over. He gave away five wides in the 16th with a slower ball gone wrong when the pressure began to shift from the Kings to the Zalmi. Babar then smoked him over deep midwicket to reach his fifty with a six. He then found the gap at midwicket to bring the hundred partnership up. And after that he collected another six thanks to a drop by substitute fielder Imam when he failed to hold on to a catch after backpedalling near the boundary. Butt’s four overs went for 56, the most expensive spell by a Zalmi bowler, and that 25-over final over delivered by him brought the required run rate to under 10 with four overs to go.

Although Mohammad fell for his 35-ball 67 in the 17th there was no pressure on the defending champions. The set Babar kept finding the boundaries and Christian had the opportunity to redeem himself for the 32 runs he had conceded in the first innings of the 20th with a short burst with the bat.