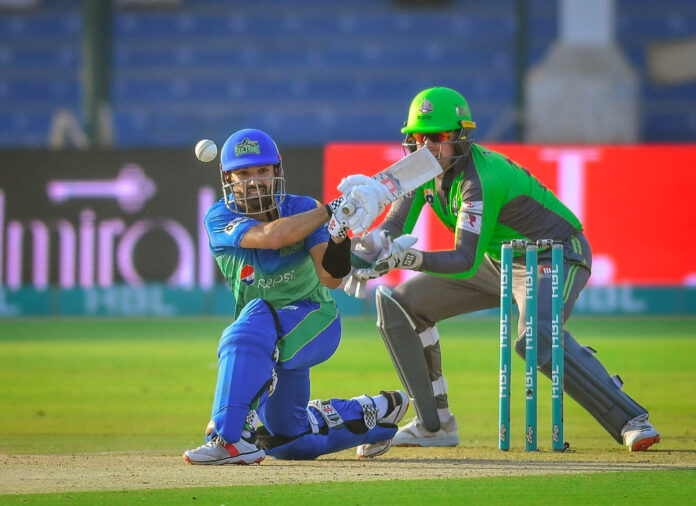 KARACHI: With the state of a world at the moment, almost everyone craves a return to the way things were a couple of years ago. Watching Lahore Qalandars in the PSL on Friday, you might as well have been transported there for three hours after Multan Sultan walloped them by seven wickets with nearly four overs to spare, ending their perfect start to this season. It was a performance of overwhelming dominance from the increasingly irrepressible Mohammad Rizwan whose 49-ball 76 made light work of a chase of 157.

The win was set up by the bowlers right at the start of the match after the Sultans won the toss and – guess what – decided to bowl. With Lahore opener Sohail Akhtar struggling for fluency, Sohail Khan and Shahnawaz Dhani’s plan to cramp Fakhar Zaman for room worked like a charm, stifling him before bringing the wicket. By the time the powerplay was done, the Qalandars had managed just 25, their lowest six-over total in PSL history.

It was only Mohammad Hafeez, perhaps the only Pakistan batsman to match Rizwan for form at the moment, who propelled Lahore to a respectable total. He began by clobbering a six back over bowler Shahid Afridi’s head, who had a difficult day today.

Hafeez went from strength to strength, bringing up his half-century of 27 balls, but a mix-up with Samit Patel led to his first dismissal of the tournament. There was no one to take over the mantle from him, and the Qalandars’ innings began to splutter from that moment. Joe Denly, Ben Dunk and Patel all failed to get their side to the sort of total that would challenge the Sultans, and while the early wickets of Chris Lynn and James Vince gave the Qalandars hope, it was only flickering.

With the Sultans lacking a premium fast-bowling asset, Carlos Brathwaite has proven himself surprisingly useful, particularly in the first half of the innings. He was introduced as early as the fourth over today, and with his exotic mix of pace, angles, and length, kicked things off with a wicket maiden. Even Hafeez struggled to really get a hold of the West Indian, while Joe Denly often took several deliveries simply to get off strike against him. When he came on in the 14th over to bowl his final over, he broke an 89-run third-wicket partnership that looked to have set up the Qalandars for the finish, drawing Denly wide outside off stump to get him nicking off. It wasn’t bowling to set the heart racing, but Brathwaite’s intelligence did at least as much for the Sultans’ chances as Rizwan’s belligerence in the second half.

The Qalandars weren’t just ordinary with bat and ball today, but also in the field. Zaman’s struggles up top might have caught the headlines for how heavily the side relies on him, but it wasn’t the only department he was found wanting. There were two chances to put an end to the 110-run partnership between Sohaib Maqsood and Rizwan, with each of them allowed a reprieve by Zaman in the deep. When Maqsood sliced one to him, he opted for the safety of collecting it on the bounce, while Rizwan’s chance spooned straight into his hands and back out again a few overs later. It was a day Zaman will want to put out of his mind, and on that point, he’ll find the rest of his side in agreement.

Despite the Qalandars having little to smile about, there was still the obligatory moment of magic that Shaheen Afridi would conjure up, almost like it’s been written into his contract. In his first over, he had the out-of-form Chris Lynn facing up to him, a contest that would end by knockout in two balls. Lynn kept out the first one, an inswinging yorker, before being hopelessly outfoxed by a dream of a follow-up. Landing on middle a foot from the base of the stumps, it seamed ever so slightly towards off and away from the bat Lynn hopelessly brought down to fend it off. It would crash into off stump to create that most elegant spectacle, a cartwheeling off stump after an impact to its base, with a flummoxed batsman frozen just in front of it.

Afridi followed it up with another wicket in the 15th over, though the one that removed Rizwan was more of a formality after the game was done. It produced one of the cosier moments of the game, with the 20-year old walking up to the man eight years his senior and giving him a pat on the head to acknowledge his efforts.