Only formal courts should be allowed to hand down judgments 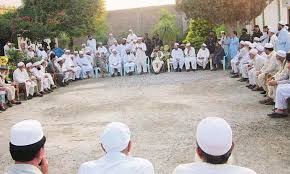 On August, 30, 2018, while hearing a case related to forced marriage of minor girls to settle murder and tribal disputes, the Supreme Court of Pakistan had declared jirga and panchayat (tribal councils) unconstitutional and illegal as they were against fundamental human rights. Regrettably, in the blatant violation of the apex court’s orders, the tribal councils continued to occur in several regions of the country infringing human rights with apparent impunity.

On February 06, a jirga of tribal elders at Wara region of Mamond tehsil of Bajaur district banned women from calling the local FM radio station and visiting Sada-e-Aman Center, a place where cash grant is given to women after they give birth under the government policy. The jirga announced that if any tribesman allowed his female to telephone the radio station or to visit the said center, he would be fined Rs.10,000.

Similarly, on the behest of jirga, a couple hailing from Kohistan who had married of their own free-will in Karachi in September, 2020, were allegedly killed after two months in November. In another incident, a 15-year-old girl and a boy 17 were reportedly electrocuted by their families in compliance with the orders of a jirga in September last year in Karachi. These are the latest episode in the ongoing saga of such heinous decrees of the unconstitutional parallel judicial system across the country.

Amidst many other factors, the substantial factor responsible for the continued existence of the jirgas and panchayats is that many of the bodies are represented by feudal lords, Sardars and Maliks who have been powerful and dominant parliamentarians in successive governments and controlling decision-making and policy formulation processes in Pakistan’s parliament.

Moreover, vani, a tradition of giving girls in marriage by force to compensate for a crime committed by their male relatives, is the most ubiquitous tradition in rural Pakistan. In 2012, 13 girls between the ages of 4 and 16 were ordered to be married off to resolve a murder dispute between two clans in Balochistan.

The shocking fact is that members of jirgas and panchayats are authorized to use unrestricted powers to award death and other stringent sentences, and they are not accountable and answerable to anyone. The matter of great concern is that the members have no or little knowledge of laws concerning the criminal and civil matters. Despite this fact, the bodies have yet been existing and functioning effectively. Amidst many other factors, the substantial factor responsible for the continued existence of the jirgas and panchayats is that many of the bodies are represented by feudal lords, Sardars and Maliks who have been powerful and dominant parliamentarians in successive governments and controlling decision-making and policy formulation processes in Pakistan’s parliament.

Although many of the matters referred to the jirgas and panchayats, the tribal judicial system, are related to women and girls, yet the tribal councils are fully represented by men and women have no say in them. Complete absence of women representation is one of the principal reasons that decrees issued by this patriarchal structure badly affect and tyrannize females. These illegal non-state justice institutions are wholly and evidently opponents of the fundamental rights of women to free-will life, education and health. They prevent girls from achieving schooling, restrained women within their houses and develop the destructive traditions of child marriage and honour killing. Not only this, but women have been made victims of many other oppressive, barbaric and criminal acts. It shows that abhorrence for women’s liberty and the misogynist attitude in Pakistan’s patriarchal society are deep-seated and entrenched. These are the significant reasons that, according to the Global Gender Gap 2017 report, Pakistan was placed at second worst country for women with the rank of 143 out of 144 countries.

Some believe that jirgas and panchayats making speedy decrees offer a swift settlement of disputes, while courts of law take too long to give out justice. The fact is that rapidly made rulings by the bodies do not bring about remedies for injustice, violence and exploitation. Instead, the verdicts persecute women, minorities and the economically feebler people.

The faulty and wrong rulings of jirgas have resulted in initiating and resurfacing of the fatal tribal conflicts in Sindh. Started on insignificant issues, the tribal disputes ultimately culminate in the deadly wars which result in killings of a gigantic number of lives and huge financial losses. A colossal number of such tribal clashes have taken place in the province so far. Many of the bloody disputes continued for long years, some of them lasted for two decades. Traditionally, the jirgas compensate murder with murder and remaining amount of money goes into pockets of chieftains of the disputing tribes.

The fatality and prolonged continuity of the clashes finally badly affect women of the conflicting tribes. In tribal feuds, mostly men are killed. And during the fighting taking place between tribes, no male member of the disputing clan can look-after his crops or continue his job in any other village, town or city because of the terror of being killed by the rivals. In these both situations, their women have to shoulder lifelong responsibility to support families working in the fields or begging for money.

Although women are entitled the fundamental rights to life, liberty, security and dignity by the constitution of Pakistan and the international laws, yet jirgas and panchayats have been a massive source of serious violations of these women rights. The government of Pakistan should shoulder the responsibility to protect women rights, and to this end the government has to obliterate jirga and panchayat systems.

Sheikh Abdul Rasheed
The writer is a freelance columnist

From its creation Pakistan remained predominantly an agricultural country and for five decades 1947-1997, it registered an average growth rate higher than the world’s...
Read more
Comment

It is gratifying to note that Bangladesh and India both resolved to work more closely together for further collaboration in the areas of common...
Read more
Comment

A Letter from Prometheus Independent journalism and democracy in Pakistan have always been in survival mode because both are interlinked and both contest the writ...
Read more
Letters

It will be very beneficent if teenagers are allowed to have their licence at the age of 16. The first reason for this is...
Read more
Letters

Water pollution is one of the major threats to public health in Pakistan. Drinking water quality is poorly managed and monitored. Pakistan ranks at...
Read more