Restoration of constitutional vision and democracy

The constitution has never been truly implemented 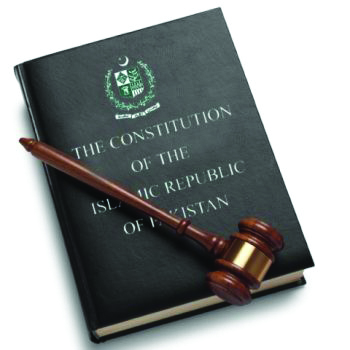 On 14 August 1973, Pakistan was declared a constitutional democracy. On papers it is called the Islamic Republic of Pakistan. while it is neither Islamic nor a Republic in practice. There is a history of struggle for the Constitution. The periods of real democracy have been brief (1947 to 1958, 1971 to 1977). Invariably the dictatorships that followed neutralized the democratic gains of both the eras of civilian supremacy.

Mr Justice Muhammad Yaqub Ali, the Chief Justice of Pakistan, came up with a damage control doctrine according to which, once the usurper has been disarmed he should be punished under the law. It was Zia-ul-Haq who violated Article 6 of the Constitution on 5 July 1977. He then went on to even disfigure the consensual document.

The same article was violated again in October 1999 by Pervez Musharraf. In both instances the judiciary did not apply the Justice Yaqub Formula to punish the perpetrators nor did they annul the amendments forced by the dictators who did not enjoy people’s mandate. It was only the second time around that Pervez Musharraf had to face the law for imposing emergency rule in November 2007 followed by the imprisonment of judges. It was more tit-for-tat justice for the protection of their own institution, and nothing had changed much for the common man.

Over four decades after its enactment, the Constitution has not been taken seriously till today. Most senior officials who take oath on the Constitution have not even read it. Zia’s disfiguring continues to deny the people of Pakistan their genuine democratic rights. Musharraf kept the constitution in abeyance for extended periods. The pseudo-democrats that followed in between did not bother to follow the document either. The PML(N) government tried several obnoxious amendments like declaring the Prime Minster Amirul Momineen (Caliph) while Zardari abolished the entire concurrent list of departments without any homework or preparation at the provincial level. Devolution of power and provincial autonomy were always a part of the original Constitution but was not followed in the past nor it has been implemented now in letter and spirit. Authority has moved from Islamabad to the four provincial capitals while the District Governments remain non-functional.

Absence of democracy has repeatedly hurt the republic. Madare Millat Mohtarma Fatima Jinnah made a last-ditch effort to save the federation when she challenged Ayub Khan in the Presidential Elections held in early 1965. She demanded restoration of the 1956 Constitution and free and fair elections on the basis of one man, one vote. The dictator was not interested in the Eastern Wing as it was too much trouble for him but he lacked the courage to work out an amicable settlement with the genuine leadership of East Pakistan. In fact it was his Martial Law which initiated the breakup of the Quaid’s Pakistan. Despite being in majority East Pakistanis were marginalized and unnecessarily cornered.

As a nation we must look inwards with major soul searching to revive the spirit of real freedom as it was when the journey had started in August 1947. Citizens have to take charge to be treated as citizens.

Shifting of the capital from Karachi also did not help as Islamabad was too far and detached from Decca. A true democratic order could have kept the federation together but it was a massive establishment blunder of that time.

On 6 January 2021, just a few days before the swearing-in ceremony of the new President, American democracy came under attack. A mob entered the Congress building in Washington DC. Despite being the oldest constitutional democracy of the world, there was a major disconnect between the people inside and those who forced their way in. The divisions in the society were evident.

According to Dr Adil Najam, the US scholar of Pakistani origin, a lot of healing is required to put the democratic order back on track. President Joe Biden has a difficult task ahead. Senators are demanding restoration of democracy through ‘For The People Act ‘. The focus must shift to the welfare of the common man who has been hit hard by the recent pandemic. Over 400,000 people have perished in the USA. The health care system is being pushed to the limit. This factor played a key role in the defeat of the incumbent President Donald Trump who now faces impeachment for the second time in his tenure. People must come first, and without constitutional vision and application, democracy cannot survive. The message is loud and clear; elected governments must learn to serve, not rule. The 21st century may witness the demise of democracy if the disconnect between the rulers and the ruled continues.

In the land of the pure the situation is even more alarming. Most national institutions continue to function in the colonial mode where people are treated as subjects not citizens. In the brief period after the enactment of the Constitution in 1973, the elected government tried to restore individual rights. The  original constitutional document had over 20 articles for the protection of human dignity ( Articles 8 to 28, 212 ) which have been largely ignored.

The current legislature is mainly debating personal issues, for the opposition it is for covering their corruption while for the treasury it is the defence of their inaction to provide relief to the public. Very few elected representatives of the public even know of their constitutional obligations

Today the country continues to suffer for the corrupt practices of the last 40 years on one hand, and the lack of direction to expeditiously move forward on the other. This mismanagement of the past seems unmanageable with all the fines and attachment of assets worldwide, financial order has to be restored. By eliminating current account deficit some light has become visible at the end of the tunnel but a lot more needs to be done.

As a nation we must look inwards with major soul searching to revive the spirit of real freedom as it was when the journey had started in August 1947. Citizens have to take charge to be treated as citizens.

October 4, 2022
PARIS: The United States will impose "further costs" on Iran for its lethal crackdown on protests sparked by the death of Mahsa Amini, President...