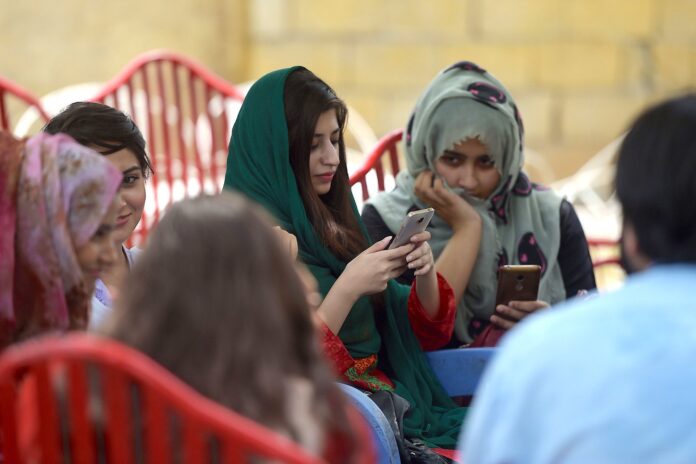 ISLAMABAD: Six out of ten women internet users in Pakistan who took part in a study face some kind of restriction from their families while accessing the internet, a new study by a non-governmental organisation (NGO) finds.

The study, titled “Women disconnected: Feminist case studies on the gender digital divide amidst Covid-19”, conducted by Media Matters for Democracy, examines the impact of gender digital divide on women during the coronavirus pandemic and is based on a survey with 215 women from across the nation and a series of in-depth interviews.

A whopping 80% of the respondents who are unable to use the internet are from South Waziristan, one of the newly merged districts of the Khyber Pakhtunkhwa province.

The cost of the internet continues to be a concern with 76% of the respondents saying that the internet is expensive and more than a third saying it was beyond the reach of an average person.

The study indicates that the need for internet usage among respondents increased with the Covid-19, with 8 out of 10 respondents saying they felt the need to use it more during the lockdown.

At the same time, a number of them lost regular access to the internet due to the lockdown which barred them from using the internet in workplaces, educational institutes and other places that they had previously used to connect.

Prior to the pandemic, many women accessed the internet outside their homes but their problems now include slow speed and reduced access due to family members using the same connection or devices.

The respondents and interviewees also indicated that surveillance at home has become stricter and threats of domestic violence more pronounced as men remain in the house and many women are unable to step out to purchase mobile data.

The research also finds evidence that women in the newly merged districts are unable to connect to emergency health services in case of emergency due to lack of connectivity. The lack of communication combined with a lack of local emergency health care has resulted in fatalities of women, including during childbirth.

Researchers say that the unavailability of official data about the gender digital divide being available by the Pakistan Telecommunication Authority (PTA) or local service providers also posed challenges. Therefore, much of the research was based on anecdotal evidence and reported incidents.

Commenting on the research, Zoya Rehman, one of the researchers, says that  “We were trying to look at the lived experiences of women and, of course, there’s no monolithic woman either, which is also something we assert in this research project. These experiences cannot be seen through one kind of lens and you can’t brush them with one stroke.”

Another researcher, Hija Kamran, regretted that despite access to the internet being acknowledged as a fundamental right, “many people continue to be disconnected” in Pakistan. “Our study finds that the gender digital divide is not merely an inconvenience, it, in fact, hinders growth and opportunities and is life-threatening for women who are not able to access the internet because either there are infrastructural barriers, or it is unaffordable, or due to patriarchal restrictions,” she said.

“It is the responsibility of the government to ensure every citizen has access to open, affordable, and safe internet in Pakistan,” Kamran underlined.