The leaks as a form of sex education 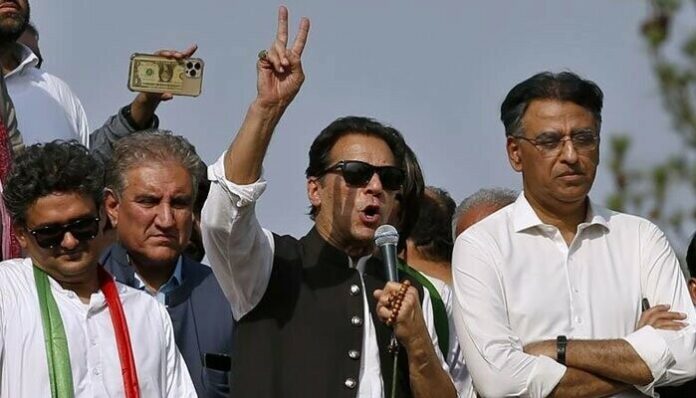 The Pakistan Tehreek Insaf (PTI) has finally succeeded in dissolving the provincial assemblies of both Punjab and Khyber Pakhtunkhwa. The dissolution scheme is part of the greater plan to force the central government of the Pakistan Democratic Movement (PDM) into holding general elections before time.

Apparently, the dissolution bid is an extension of Sheikh Rasheed’s idea of Jalao-Gherao (set everything on fire and lay siege to everything) to break out mayhem. Creating disruption to achieve political objectives is a throwback to the 1970s politics  – the era when ideologies used to lock horns with each other over any issue at hand. Old habits die hard.

In its ranks, yearning for the politics of hostility, the PTI also has ex-members of the Jamaat-e Islami (JI) such as Ejaz Ahmad Chaudhry and Mian Mehmoodur Rasheed. These members, who are mostly former provincial and national legislators, know well how to heat up the streets by resorting to agitation campaigns. Interestingly, they have kept mum on the audio leaks of their party’s leader, Imran Khan.

The silence of ex-JI members on depravity and decadence is striking. They offered all religious help to the PTI to enable it to emerge as a successful and popular political party, especially in Punjab. They were ready to correct every wrong of the PTI and defend the PTI’s chairman to the hilt at every turn of crisis. This time, however, they observe silence.

To their utter dismay, the idea of making a new Riyasat-e-Madina has been reduced to delineating who is a greater playboy: the one in the audio leaks uttering dissolute sentences to a girl or the one in the video leaks swaying with a girl on the dance floor. In both cases, at least, the girls are Pakistanis, and the competition is local.

Nevertheless, in both cases (expressed by two schools of thought), the ex-JI members in the ranks of the PTI are silent. They are least interested in rampant moral degeneration and more interested in making political space for themselves. They are squarely in the phase of struggle for survival. They cannot go back to their mother party, the JI. They have to live and die with the PTI.

Nevertheless, the competition was intense. Whereas one couple was showcasing the hidden face of the would-be Riyasat-e-Madina, the other couple was exhibiting the veiled face of the surviving Islamic Republic. In either case, dissoluteness ruled supreme. It is known that certain prohibited corners are also meant for amusement. Bystander Pakistanis felt exalted and amused. If one could bring out more such audios and videos, it would be a great service to entertain Pakistanis. Indeed, freedom and happiness are connected.

The leaks offered the tip of the iceberg. The listeners-cum-viewers have been waiting keenly for the iceberg itself. They want to fathom the depth of shamefulness. Conservatism of society is a sham, so is Islamism. This is why perhaps a school of thought asserts that the leaks are a means to educate the youth, both boys and girls, on sex education. Grow up and be an adult is the explicit message. Interestingly, the message was aired by the males who had crossed their 60s, whereas the girls involved were less half their ages. Medicine says that, in a sexual relationship, age disparity is irrelevant. Certainly, as the saying goes, a man never gets old unless he thinks he has grown old. Aging is more psychological than physical.

In a society which forbids formal education on sex, informal sex education carves out its own path– by trampling over the norms and values of society. The presumption is that norms and values can be changed by the force of necessity. Every era comes with its own list of necessities. This school of thought also believes that the leak phenomenon is a facility to cater to the needs of informal sex education in society. In the name of leaks, prohibited talk and proscribed shocks are made available on social media to make the youth mature psycho-emotionally. Certainly, the youth bulge is not a misnomer; it is a reality. The youth bulge offers callow minds and renders them amenable to emotive sloganeering. Electoral politics is one such arena, informal sex education is another. Both are now at the service of the youth.

The second school of thought says that the episode of audio and video leaks was a tit-for-tat event. If I am soiled and condemnable, you are also dirty and disgraceful. Both teams exposed each other: Is hamam mein sab nangay hain (Everyone is naked in this bathroom). That is, both of us will rise and fall together. With the proliferation of this message, the leak phenomenon is at a halt. The private entertainment facility is closed, to the dismay of many onlookers.

Nevertheless, in both cases (expressed by two schools of thought), the ex-JI members in the ranks of the PTI are silent. They are least interested in rampant moral degeneration and more interested in making political space for themselves.They are squarely in the phase of struggle for survival. They cannot go back to their mother party, the JI. They have to live and die with the PTI.

If the PDM had dissolved any assembly prematurely, the ex-JI and present PTI members would have asked publicly the reasons for such a heinous act. Denying voters of their due right of receiving public works would have been condemned. However, this is not the case now.

Generally speaking, there should be cogent reasons for dissolving provincial assemblies, which had been constructed under the constitutionally prescribed limit of five years. The discretion to dissolve any assembly is not absolute; instead, it is subject to reasons. With a mandate, the opposition in the provincial assemblies was present and it was not making a demand to dissolve to hold next elections. It is the ruling party which has done so.

It is apparent that both provincial assemblies have been dissolved to create a political crisis that could necessitate the holding of premature general elections. In fact, both acts of the PTI are questionable: first, the PTI’s discretion to dissolve provincial assemblies as a ruling party; and second, the PTI’s effort to create political unrest to materialize its demand of holding early general elections.

This is how democracy becomes unsuitable for developing countries such as Pakistan and this is how people get fed up with democracy, and start looking for alternatives.