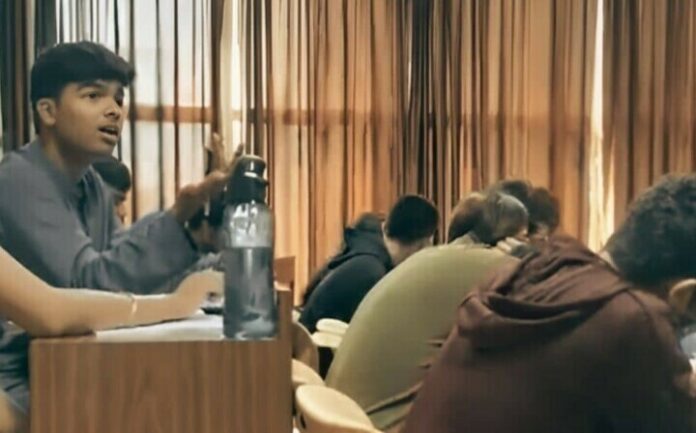 A Muslim student at the Manipal University in India’s Karnataka lashed out at a teacher who allegedly called him a “terrorist” during class, the Indian media reported on Monday.

The 45-second video of the incident, which is being widely circulated on social media, shows a young man confronting the professor in a classroom full of students.

A report by the Hindustan Times quoted the student as saying: “How can you pass such statements?”

In his response, the professor clarified that he had passed the remarks “as a joke”, to which the student replied: “26/11 is not funny, being Muslim and facing such things in this country is not funny.”

According to the Hindustan Times report, the professor subsequently apologised to the student, saying that he was equal to his son. “Will you treat your son like this? Will you label him as a terrorist, in front of everyone in the class? Sorry alone will not help, sir. It doesn’t change how you portray yourself here,” the student was quoted as replying.

Meanwhile, a report by NDTV said that the university has initiated a departmental inquiry against the teacher and the “student has been given counseling”.

The professor’s remarks drew the ire of a number of Indian journalists and activists.

Ashok Swain, a professor at Uppsala University, called the incident “what it has been to be a minority in India”.

Journalist Swati Chaturvedi said the video was “shameful, yet so [is] every day in Modi’s India”.

AJ English journalist Said Khalid asserted that calling a student terrorist was “not funny” and demanded that the teacher should be fired.

Actor Arfi Lamba highlighted that “hatred and communalism have reached the temples of learning”, adding that a student should not have to defend himself against bigotry.

The Hindu reporter Syed Muhammed also stressed that calling a Muslim a terrorist was not a joke.

“There are many Muslim students who’ve been discriminated against, pigeonholed, and are victims of biases of teachers. It is unfortunate that the brave student has been put in that position,” he tweeted.