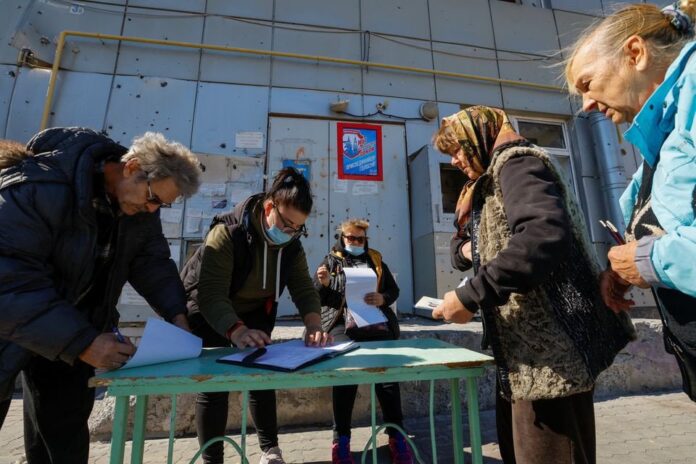 KYIV: The Kremlin said on Monday it was in “sporadic” contact with the United States on nuclear issue, a day after Washington warned of “catastrophic consequences” if Moscow used nuclear weapons to protect Ukrainian regions it looks set to annex.

Citizens in four regions of Ukraine were voting for a fourth day on Monday in Moscow-organised referendums on joining Russia, a plan Kyiv and the West have branded a sham. They say the outcomes are pre-determined and they will not recognise the results.

But by incorporating the four regions – Luhansk and Donetsk in the east and Zaporizhzhia and Kherson in the south – Moscow could portray Ukraine’s efforts to retake them as attacks on Russia itself.

President Vladimir Putin said last week Moscow was ready to use nuclear weapons to defend any of its territory as he announced a mobilisation drive that threatens to significantly escalate the seven-month-old conflict in Ukraine.

US National Security Adviser Jake Sullivan said on Sunday the United States would respond “decisively” to any Russian use of nuclear weapons against Ukraine, without elaborating. He said Washington had privately told Moscow “exactly what that would mean”.

Asked on Monday about Sullivan’s comments, Kremlin spokesman Dmitry Peskov said: “There are channels for dialogue at the proper level, but they are of a very sporadic nature. At least they allow for the exchange of some emergency messages about each other’s positions.”

Ukrainian President Volodymyr Zelenskiy said he did not believe Putin was bluffing when the Kremlin leader said Moscow would be ready to use nuclear weapons to defend Russia.

The exiled mayor of Russian-controlled Melitopol in the Zaporizhzhia region condemned the referendums – which are due to end on Tuesday – as “a fake and a farce”.

“The voting takes place in front of assault rifles, men with weapons… People are grabbed right on the street and are forced to vote not only for themselves but for their whole families,” he said via videolink from an undisclosed location.

The governor of Luhansk, another region Moscow aims to annex, said Russian-backed officials were carrying ballot boxes from door to door, accompanied by security officials.

Residents’ names were taken down if they failed to vote correctly or refused to cast a ballot, Serhiy Gaidai said.

“Representatives of the occupation forces are going from apartment to apartment with ballot boxes. This is a secret ballot, right?” Gaidai said in an interview posted online.

The four regions represent about 15% of Ukraine. Russian forces do not control all the territory in those regions, where fighting still rages. They would add to Crimea, annexed by Russia in 2014 after a similar referendum there.

Kremlin spokesman Peskov said on Monday Russia had taken no decisions on closing its borders, amid an exodus of military-age men since Putin’s announcement, which aims to enlist some 300,000 reservists.

Almost 17,000 Russians crossed the border into Finland over the weekend, Finnish authorities said, while Russian state media said the estimated wait to enter Georgia hit 48 hours at one point on Sunday, with more than 3,000 vehicles queuing.

More than 2,000 people have been detained across Russia for protests at the draft, says independent monitoring group OVD-Info. With criticism of the conflict banned, the demonstrations were among the first signs of discontent since the war began.

A 25-year-old gunman opened fire at a draft office on Monday in the Irkutsk region of Siberia, the local governor said.

In Russia’s Muslim-majority southern region of Dagestan, police clashed with protesters, leading to the detention of at least 100 people.

Peskov acknowledged that some call-ups had been issued in error, saying mistakes were being corrected by regional governors and the ministry of defence.

In a Sunday video clip, Zelenskiy addressed Russian protesters directly: “Keep on fighting so that your children will not be sent to their deaths – all those that can be drafted by this criminal Russian mobilisation.”

“Because if you come to take away the lives of our children … we will not let you get away alive.”

Patriarch Kirill, the head of Russia’s Orthodox Church and a close ally of Putin, said anybody who sacrificed themselves on the battlefield would be “cleansed…of all the sins they have committed”.

Zelenskiy said Ukraine had discovered two more mass burial sites containing the bodies of hundreds of people in the northeastern town of Izium, part of territory recaptured from Russian forces this month.