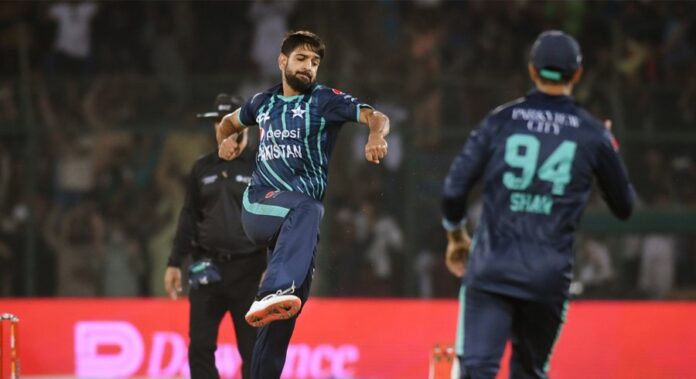 LAHORE: Pakistan pacer Haris Rauf bowled an exceptional 19th over in the fourth T20I against England while defending 167.

The right-arm pacer changed the complexion of the game after Liam Dawson smashed Mohammad Hasnain with four fours and a six in the 18th over of the match and only nine runs were required off the final two overs.

Five runs were remaining off the ten balls before Haris changed everything. While facing a short, Dawson couldn’t control his pull shot and holed out mid-wicket fielder, which opened the room for the paceman to do the damage.

Rauf’s pace had cranked up as he cleaned up the debutant Olly Stone on next ball and had a leg-before shout turned down against Reece Topley. The ball to Topley was a scorching yorker clocked at 96 mph but was turned down as the ball was sliding down the leg-stump.

In the next over, Topley tried to steal a single to get off strike but fell well short of his ground at the non-striker’s end as England fell short by three runs in front of an electrifying crowd.

“First of all we are thankful to Allah Almighty that Pakistan won the match and it was an important match of this series. As a team we have the never give up attitude and every player is giving his 100 percent effort in the ground. I bowled with the same attitude and Pakistan won the game,” said Rauf in post match press conference.

“He [Dawson] scored a lot of runs from Hasnain’s over and of course I was in the field. I was planning beforehand and had the idea as to where I should bowl to him.

“The plan was to get his wicket and turn the match and Alhamdullilah I got the wicket as planned. I had the confidence in my abilities and knew that if I bowl my best ball, we would win this game.”

The paceman also backed his team-mates who are under the firing line as Pakistan’s middle order woes continue ahead of the all-important T20I World Cup next month.

“Any player can have a hard time, as a team we have to support each other. I think the ability that they have, we all know that they have won matches for Pakistan and anytime they can make a comeback. We have full trust in our players.”

Asked if he had improved under the bowling coach Shaun Tait, Rauf said he had worked with the former Australian quick on the Test tour of Sri Lanka, where he was a part of the squad in a two-match Test series.

“Towards the start, any player struggles and has little idea of the situation. So you learn over time and in any field. So I try to learn,” Rauf explained.

“Shaun Tait has kept everyone calm and in Sri Lanka he worked with me a lot as I was in the Test squad. I was trying to work on my fitness and understand the game. In T20 cricket, sometimes you go for runs. One day you bowl well and the next day, you can concede few runs. So bad time can come on any bowler. I have 100 percent confidence in my strengths.”

Pakistan will now face England in the fifth T20I on Wednesday (September 28) as the action now moves to Lahore for remaining three matches of the series.