On the Sanaa manuscript 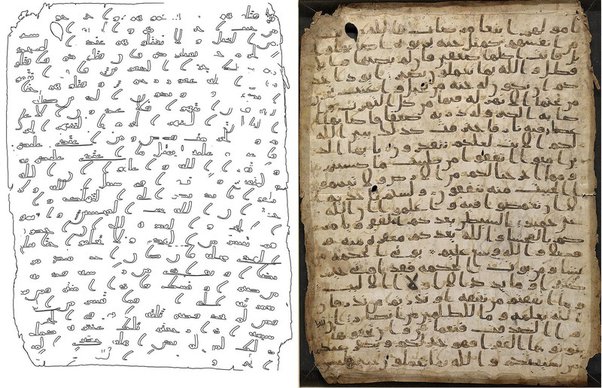 Professor Daniel Robinson of Oxford University in his Great Ideas of Philosophy presents what he believes to be milestones of the history of thought. While presenting his wonderfully enthralling views on the subject, he suddenly finds it necessary to remark (almost in passing) that the text found in the standard Quran is not quite beyond doubt as the one handed down by the Prophet (peace be upon him). In support of this conclusion, the esteemed professor points to the Sana’a palimpsest discovered in Yemen in 1972, citing therein variations from the contents of the standard Quran. There is no denying Professor Robinson’s razor-sharp wit, rare insight into the history of philosophy, and rarer still mastery of expression. But it is obvious that he has no clue what the Quran is, nor how it has reached us.

It would be unfair and unreasonable, however, to blame the professor too much here. For there are few Muslims who are any more knowledgeable regarding God’s scheme of transmitting his religion in an error-free manner, which naturally includes the mode of transmission of the Quran. Therefore, they are no less uninformed than the good professor, at least in this regard.

Of course, it is a big deal in Islam if the Quran has undergone an imperfect transmission, such that it does not measure up to what was revealed to Prophet Muhammad (peace be upon him). For Muslims, the Quran is the word-perfect speech of God, preserved from any corruption by the Almighty Himself. The very foundation of Islam fails if it can be proved that its transmission has been less than perfect. No wonder there has been so much excitement surrounding the Sanaa palimpsest on the part of those who have no love lost for Islam. Ditto, the uneasiness on the part of Muslims when they are confronted with such information. Those rare specimens who know better realize that there is infinitely more excitement and anxiety (in the two groups respectively) than is warranted.

Another cause of misunderstanding in this regard is the failure of many outsiders as well as Muslims to understand that the Quran is recitation, not text. So long as it is recited properly, how it is written has no significance whatsoever

Which begs this question: What does it mean, in this context, to know better? Leave alone the outsiders, few Muslims know that even in today’s age of technology, the final check of accuracy of a newly produced copy of the Quran is not whether it conforms to a ‘standard’ copy placed in some special location but a certificate to that effect by multiple individuals who have committed the entire Quran to memory. While it is true that individuals can always err in their memory, any individual who makes such a mistake will at once be corrected by the others. This consensus, which has also had continuity from the time of the companions of the Prophet (peace be upon him) down to our day, has always ensured the error-free transmission of the contents of the Quran. The standard Quran, therefore, need not be placed anywhere particular. There are countless true copies of the Quran, of course, but what makes each of them true is the aforementioned consensus and continuity.

The Sanaa discovery was hardly the first (or even the last) time these ‘doubts’ were raised.  Individuals and groups have been bringing variant ‘versions’, either by mistake or by design, for centuries now. There have always been inadvertent typos and misprints as well. None of these has ever rendered the Quran doubtful; and rightly so. It does not matter how many such documents are ‘unearthed’. For without consensus and continuity, nothing deserves as much as a serious consideration, let alone being accepted as the Word of God or even one version of it.

Another cause of misunderstanding in this regard is the failure of many outsiders as well as Muslims to understand that the Quran is recitation, not text. So long as it is recited properly, how it is written has no significance whatsoever. Some of the older scripts not only have missing vowels but also dots on some of the consonants as per the norms of those days. The spelling conventions and indeed the shapes of some of the letters have evolved too. Even today, the Quran is available in more than one script. What makes it Quran is the recitation, not the script. The Quran then, in essence, is not a text found in a ‘true’ manuscript lying somewhere; it is found among the millions of Muslims who have completely or partially memorized it.

The obsession with manuscripts principally owes itself to how the Bible got transmitted. Sadly, this (transmission) is not the only issue where the Quran is seen to be comparable or akin to the Bible. This is a certain recipe for misleading one’s self and others. Regrettably, the Muslims are not immune to this sort of error either. One hears them introducing their book to non-Muslims by saying: ‘The Quran is us Muslims’ Bible.’ The fact of the matter is that the two (including how they got transmitted) could not have been more different. Unlike the Bible, the Quran was always open to the general public; at no time were its contents secret or exclusively in possession of a select few. It was recited multiple times daily in congregational prayers from the very beginning, as well as in social gatherings. Every Muslim was always encouraged to memorize it, and indeed needed to learn at least some portions of it by heart for his daily prayers. Unlike the Bible, it is in a language that has always been alive and vibrant. Apples and oranges!

Nothing vital pertaining to religion has been left to chance for its transmission. Religion is complete in the Quran and the Sunnat, and both reach us through consensus and continuity. The foundation of Islam is therefore too sound to be affected by the Sanaa manuscript or the likes thereof.