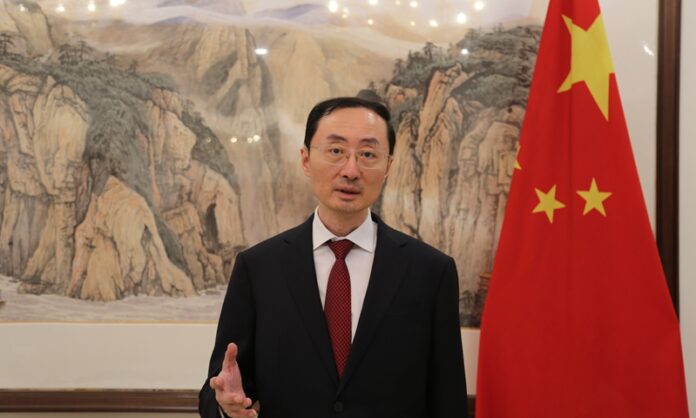 NEW DELHI: The Chinese Ambassador to India reportedly said Saturday that India-China ties are “seeing a positive impetus” and called on India to stick to the one-China principle after Indian External Affairs Ministry made its first public comment over US House Speaker Nancy Pelosi’s provocative visit to the island of Taiwan.

Experts urged India to choose a pragmatic policy toward China on sensitive issues, including the Taiwan question and US-India cooperation, for China-Indian relations to see a significant improvement.

At a media briefing on Saturday, Chinese Ambassador to India Sun Weidong said that India and China are seeing a “positive impetus” to ties given two meetings between the foreign ministers in the past few months and Indian Prime Minister Narendra Modi’s attendance at the BRICS summit in June, reported the Hindu on Sunday.

Sun talked about the Taiwan question, which has been a hot topic recently amid the escalation of the tension across the Taiwan Straits following Pelosi’s visit to the island, and called on India to continue honoring the one-China principle, according to a release from China’s Embassy in India.

Sun’s remarks came after Indian External Affairs Ministry spokesperson Arindam Bagchi on Friday said the ministry is concerned over the developments of the tension across the Taiwan Straits and called for “the exercise of restraint, avoidance of unilateral actions to change status quo and de-escalation of tensions” in the region, reported PTI.

Reuters reported that when asked about India’s position on the one-China principle, Bagchi said “India’s relevant policies are well known and consistent.”

Sun called for India to reiterate its stance of adhering to the principle on Saturday, he was quoted by PTI as telling a group of journalists.

“The one-China principle is the political foundation of the China-India relations,” stressed the ambassador at the briefing.

Experts said Bagchi’s remarks on the Taiwan question aim to keep a balance between China and the US to maximize its own interests in the region.

“Bagchi’s not making a clear claim that India supports the one-China principle this time is actually a conventional practice of the country for a decade when touching upon the Taiwan question, even though it was among the first countries to recognize that there is only one China,” Qian Feng, director of the research department at the National Strategy Institute at Tsinghua University, told the Global Times on Sunday.

Qian noted that there have been signs showing that China-India relations are going upward recently, but relations are still at a low level due to the border standoff, India’s cooperation with the US in the Indo-Pacific, and unfavorable public opinion in the two countries

A joint military exercise between the US and India is scheduled to take place in mid-October in Auli in the Indian state of Uttarakhand, less than 100 kilometers from the country’s disputed border area with China, reported CNN.

“India should observe ‘the three mutuals’ in China-India relations, especially on sensitive issues, including the Taiwan question and its cooperative activities with the US in the region, so bilateral relations can see a substantial improvement,” said Qian.

He also mentioned India’s recent pressure on Sri Lanka to defer the arrival of the Yuan Wang 5, a Chinese research vessel, at Hambantota Port in Sri Lanka, saying that it is the latest example of the complexity and delicacy of China-India relations.

The Yuan Wang 5 has been cleared to dock at Hambantota Port from Aug 16 to 22, reported Bloomberg on Sunday.

PARIS: The United States will impose "further costs" on Iran for its lethal crackdown on protests sparked by the death of Mahsa Amini, President...
Read more
World

Stockholm: A trio of physicists on Tuesday won the Nobel Prize for discoveries in the field of quantum mechanics that have paved the way...
Read more
World

JAKARTA: Elite Indonesian police officers were under investigation Tuesday over a stadium stampede that killed 125 people including dozens of children in one of...
Read more
- Advertisment -