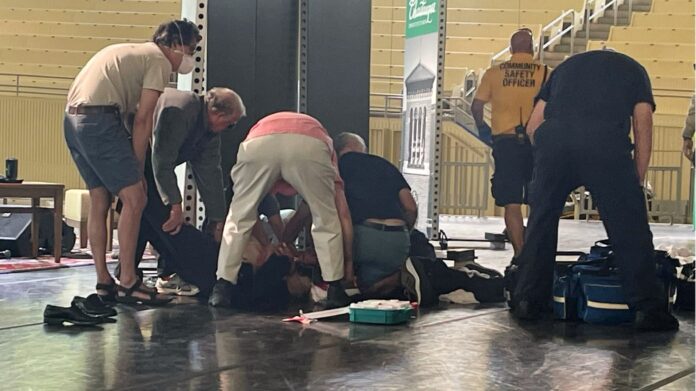 British-Indian author Salman Rushdie was stabbed on stage as he attended an event in western New York on Thursday morning, according to witness’ photos and videos from the scene.

The attack happened as Rushdie was about to speak at the Chautauqua Institution, a nonprofit education center and summer resort, located near Buffalo. While his condition is unclear, one witness told The Daily Beast that her husband saw Rushdie “able to walk with assistance” after the ambush.

Rushdie’s work, particularly his 1988 novel The Satanic Verses, has attracted fierce protests, death threats, and even a fatwa for his assassination by the former religious leader of Iran, who accused Rushdie of blasphemy. A $4 million bounty on his head remains active to this day.

A witness, Ward Pautler, told The Daily Beast that Rushdie “had just come out and sat down” on stage when he was attacked by an individual who Pautler described as “heavy set and wearing a black headpiece.”

Sitting just three rows away from the small stage next to his brother-in-law, Pautler, 76, said that at first he thought the assailant was “punching Rushdie, but then I realized he was stabbing him.”

“It didn’t take long for me to realize that he wasn’t punching Rushdie because you don’t punch with the side of your hand,” he said. Quickly, Pautler said that several people jumped on the attacker to subdue him while others began to treat the author.

As people moved Rushdie away from the stage, Pautler said “there were other people with towels wiping up the blood.”

“It’s so surreal. The more you think about it the scarier it seems,” he said, adding that he had to evacuate quickly but his family all made it home safe.

Marion Baumgarten, who attended the talk with her husband, told The Daily Beast that the ambush “happened very quickly.”

She said she saw a man in a mask rush the stage and, from her seat in the middle of the amphitheater about eight rows up, it looked like he was punching Rushdie.

“I later heard it was a stabbing,” she said, adding that the assailant “was tackled right away.” Afterwards, she said her husband saw Rushdie “able to walk with assistance.”

“Everyone was shocked,” Baumgarten said. “Many people in the audience were crying.”

An reporter who was at the event gave a similar account, saying a man stormed the stage and began punching or stabbing Rushdie as he was being introduced. “The author was taken or fell to the floor, and the man was restrained,” AP reported.

The Chautauqua Institution told The Daily Beast: “We are dealing with an emergency at this time and have no further comment or information to provide.”

Rushdie was forced into hiding after its publication when Ayatollah Ruhollah Khomeini issued the fatwa after claiming the book mocked the Islamic faith. He was the target of several unsuccessful assassination attempts and received police protection in the U.K.

October 7, 2022
ISLAMABAD: Pakistan was preparing to flag the need of a separate loss and damage funding stream required to be established at the Green Climate...