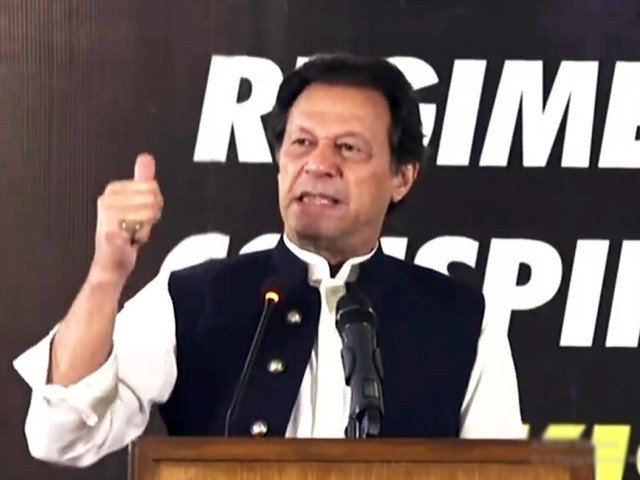 ISLAMABAD: Putting an end to widespread speculations, former prime minister and PTI Chairman Imran Khan on Wednesday clarified that he never planned on appointing an army chief of his choice in November, 2022.

“Allah is my witness, I say that I never thought about who will be the army chief in November. Imran Khan did not need to appoint his own army chief,” Khan said while addressing a seminar.

The ousted premier alleged that PML-N supremo Nawaz Sharif has looted the nation’s wealth and he wants to control the state institutions, including the army, to protect his corruption.

Khan said that he had said long ago when he came into power that both Nawaz Sharif and PPP co-chairman Asif Ali Zardari would join hands “because they have the same interests”.

PML-N leader Khurram Dastgir has stated that I wanted to bring an army chief my choice, but I did not even think who would be the next army chief of the country. “We had decided to appoint the next army chief on merit when the time comes… but yes, I ask the neutrals if there is a burglary in the house, can the watchman remain neutral?”

The PTI chief said that they [PML-N and PPP leaders] were afraid that if I decided to bring in Lt General Faiz Hameed as the next Chief of Army Staff, then their [political] future would be ruined.

“Just imagine what will happen when Interior Minister Rana Sanaullah would run the affairs of National Accountability Bureau (NAB),” said the former premier, adding that “they have dug the grave of institutions responsible for providing justice – just to protect their theft while the Election Commission of Pakistan (ECP) has lost its credibility”.

The PTI chairman further said that both the PPP and PML-N leaders are afraid of the army as their ‘theft’ is reported to ISI and other sensitive agencies. “Since Nawaz Sharif and Zardari have stolen money, they want to control institutions,” he added.

Khan said that the United States had threatened one of our rulers to push our country back to the Stone Age, adding that America changes governments for its own benefit and not for the benefit our people.

“The US wants India to be strong and compete with China… it is their agenda to recognise Israel, and forget about Kashmir.”

Earlier in the day, Imran Khan cited a Stanford University study to state that his government laid the foundation of a welfare state for the ‘first time’ in Pakistan’s history.

The former premier took to his official Twitter handle to state that the former PTI government grappled with “stabilising a bankrupt economy”, the International Monetary Fund programme, the Covid pandemic and the commodity super cycle, yet “still managed to lay the foundation of a welfare state”.

The academic paper by Stanford University was titled ‘Frameworks for a Developmental Welfare State: Lessons from Pakistan’s Ehsaas Programme’ and reviewed the Ehsaas Programme which was implemented by the PTI government from 2018 onwards.

The Ehsaas Programme was a social safety and poverty alleviation scheme launched in May 2019 and was Imran’s key initiative toward a welfare state.

Earlier this year, Microsoft co-founder Bill Gates termed the Ehsaas programme a ‘state of the art’ initiative of the country, aimed at alleviating poverty and extending help to the marginalised communities of the country.

Gates’ remarks came as he met former special assistant to the PM on poverty alleviation Dr Sania Nishtar as part of his meetings with government officials during his first-ever visit to Pakistan.