Year of inaction has brought us to this stage 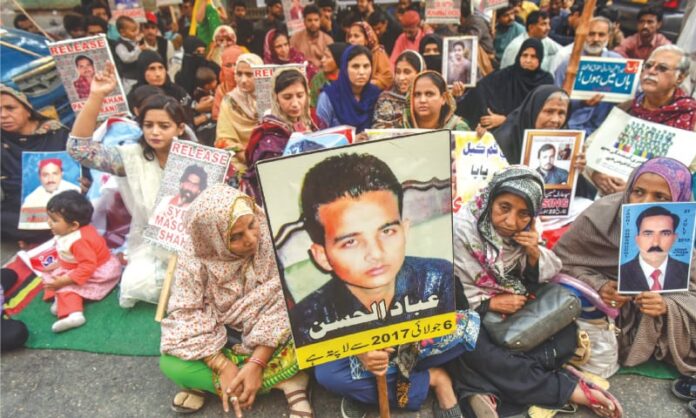 A few days ago, the Islamabad High Court (IHC) directed the federal government to serve notices on former president General Pervez Musharaff and all successive chief executives including the incumbent Prime Minister Shehbaz Sharif for following an “undeclared tacit approval of the policy” in enforced disappearances. The order is the latest in a string of multiple similar directives and judgments on the matter, none of which have done more than pay lip service to the plight of the disappeared persons. Since the 1980s, Pakistan has had a long history of enforced disappearances, which begin during the military rule of General Zia ul Haq when political workers were detained, tortured, and killed for personal and political gains. Later, these enforced disappearances re-emerged on the rationale of a threat to national security when the US alleged Pakistan harbouring militants.  Soon, what began as a counter-insurgency tactic, morphed into a way to target secular and liberal activists, voicing out victimization, and blatant violation of their constitutional rights such as freedom of speech, and assembly through an institutionalized tool of terror.

Enforced disappearance is constituted as an offense and a violation of both fundamental constitutional and human rights. Such crimes constitute a flagrant violation of the right to life, liberty, security, and the right to not be subject to arbitrary detention. Most disappearances begin with an initial arrest followed by the refusal to acknowledge the fate of the disappeared and they are often placed outside the protection of the law. It’s agonizing to see that incommunicado detention is torturous for the family of the disappeared which remain stuck in frozen trauma. They can neither mourn the death of the disappeared nor can they do anything about the situation. Especially, women in highly patriarchal societies such as Pakistan, suffer severe hardships because of enforced disappearances. Not only do they have to provide for themselves and their families, but they also have to face an uphill legal battle for the sake of the disappeared, while their marital status is stuck in limbo.

The unfortunate situation becomes from bad to worse, as state authorities are either non-cooperative or actively depict hostile attitudes in such cases. The FIR is the first legal battle for families, which is advertently not lodged by the police, instead, the witnesses and families reporting disappearances are either ignored or threatened with dire repercussions. There have been several reported incidents, where police refused to register FIRs of disappeared persons, thereby causing the Supreme Court of Pakistan to direct police to lodge an FIR of the complainant.

Unfortunately, enforced disappearances are not criminalized under Pakistani law, therefore such crimes are misdiagnosed. They are filed as either kidnapping or abduction against unknown persons, which completely ignores the impact of victimization suffered by enforced disappearances. The issue is not a mere ‘wrongful confinement’ or illegal detention of the disappeared. It is rather the absence of information, and grounds for the detention. Additionally, the law sections applied to enforced disappearances cases, ignore the basic fact that the perpetrators of these crimes are none other than the state institutions.

Sad and unfortunate to mention that certain laws do provide de jure support for enforced disappearances. Two of such laws are significant to the current discussion. First is the Protection of Pakistan Act, 2014 which grants security forces impunity for human rights violations in the name of national security. Section 6 of the said Act allows detention and internment of people while   Section 9 allows the government to withhold information about the fate of the disappeared and Section 20 provides immunity to security forces for ‘acts done in good faith.’

Surprisingly, the KPK Actions (in Aid of Civil Power) Ordinance 2019 gives wide powers to the military in the region. Under this law, the military is allowed to detain persons in certain notified areas on vague and ambiguous grounds, and they may also be transferred to unknown detention facilities for an indefinite period. The Ordinance also suspends the application of the law of evidence in the region. Instead, Section 19(2) of the ordinance states that a mere statement by a member of the armed forces constitutes sufficient evidence to convict an accused person.

The Pakistani government has made half-hearted attempts to stop violations of enforced disappearances. In 2010, the Ministry of Interior established the Commission of Inquiry on Enforced Disappearances (COIED) after the Supreme Court took suo moto notice of the matter. According to its mandate, the Commission must conduct inquiries into disappearances, fix responsibility on the perpetrators, direct the police to register FIRs against those causing the disappearance, and can direct the production of a detained person.

However, the Commission remains a toothless watchdog, which is satisfied with merely ticking people off its list of disappeared persons.  The commission only provides status reports on the disappeared person, and no details are provided to the families other than whether the individual is alive, dead, detained, or returned. The COIED’s definition of enforced disappearances is inconsistent with international law and not a single person has ever been punished by the body. Instead, the commission is often used as a tool by the security agencies to delay proceedings.

So, what can Pakistan do? For starters, we must ratify the declaration against enforced disappearances and codify the offense of enforced disappearances in the Pakistan Penal Code. The parliament must suspend the operation of laws that provide legal immunity to security agencies and make laws to push the government to conduct investigations and provide sufficient reparations to the long-suffering victims of the disappeared. Enforcing the Right to truth can also help the families of the disappeared person to know the circumstances of death, the cause of death, and the location of the burial.