Getting the sequel ready

Can Imran reproduce the 2014 dharna? 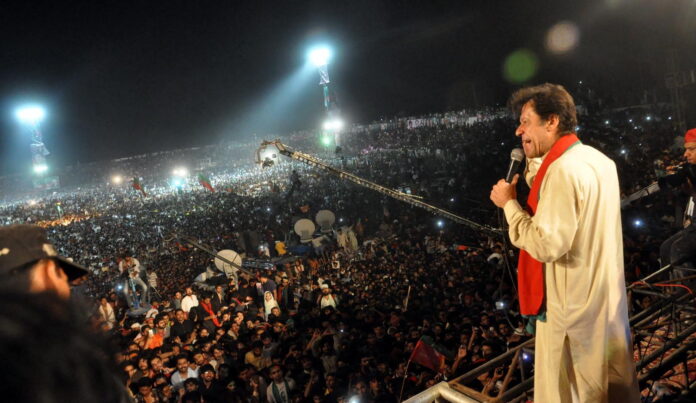 The PTI’s Long March was supposed to have led to a sit-in, but it didn’t. In a way, iit was a double failure, for it not only showed that Imran Khan did not have as much support as he thought, but that he did not have the support he thought he had from the establishment, which had made the 20124 sit-in such a success.

In 2014, he did not get the dissolution he demanded. However, the prolonged sit-in allowed to propagate his views and his anti-government narrative, in a widespread fashion, that was effective as never before. The most important factor was the media-freshness: this was the first D Chowk sit-in covered so extensively. There was some pressure from the establishment, but basically, the coverage made good journalistic sense. Indeed, when the sit-in was called off, because of the APS Peshawar massacre, the media was about as stuck as Imran, because the coverage was not getting the sort of viewership that justified it, and Imran was running out of things to say.

That sit-in set a bar for the future, which meant that Imran would somehow have to outdo it. If indeed he could bring the two million people he said he would, or even a tenth of that number, he would have gathered a really humongous crowd, thus showing that his narrative was really reaching out to people. However, the crowd that turned up was not that large, and was less than the 2014 effort. The result was that he did not stage a sit-in.

As in 2014, the sit-in was for those who had come from out of town. He, himself a bonafide Islamabad resident, went to his Bani Gala residence, where he rested, spent the night, and came back the next date, announcing that there would be no sit-in.

The Supreme Court had allowed the rally, upholding the citizens’ right of assembly, but said that it could not gather at D Chowk. There had been incidents of arson, and the police had resorted to teargassing the crowd. The Supreme Court had said they had the right to assemble, but at the H9 park, now the D Chowk. Imran took that as a blanket permission to go to D Chowk.

Imran must have realised by now that there is a difference between going to see him at a rally, and braving police lathis to do so. He must also have realised that while the Supreme Court might protect his rights, it will not twist the law to favour him. He might have benefitted once from the mercy of the court, but should not expect it to have infinite patience.

When a contempt petition was moved the next day, the Supreme Court took a forgiving view, and said that Imran had probably not been conveyed the order properly.

It was assumed that this meant that the Supreme Court had a soft spot from Imran. That might well be so, but it was also true that contempt is a kind of discretionary prerogative of the court. Being issued a contempt notice means that the contemnor has been found guilty. The only answer to such a notice is to throw oneself on the mercy of the court. Of course, one may attempt a defence, such as the Court having misunderstood what one said. A common example is that it is contemptuous to say that a judgement was given under influence or because of a bias or a bribe, but it is not contemptuous to criticize a judgement for being wrongheaded or ignorant. Disobeying a court order is contempt, and many lawyers have profited from preferring petitions that their client’s opponents had been contemptuous by, say, moving a boundary six inches where the judgement had said eight. That is how Imran is supposed to have been contemptuous, by holding his rally where the Court had said he couldn’t.

It might be said that he had committed what is called contempt by scandalizing the court by implying that it was ancillary to the conspiracy he claims removed him from office. The court has not responded to that with contempt notices. That shows there has been an advance from the time that there was a protest on Lahore’s Mall Road by the tenants of the Chief Justice of the Lahore High Court, who owned land in Faisalabad district. The publisher and editor of the newspaper which reported the incident were charged with contempt (which meant conviction) for ‘scandalizing the court’.

The Supreme Court may try to avoid criticism by giving the PTI the decisions it wants, but it cannot provide the PTI the crowds that Imran wants. Though it is now suggested that the ix-day limit is not so much to get a date for new elections, as to get time for a fresh Long March. The conventional wisdom was that a protest could not be launched in summer, in the middle of the hot weather; that seems correct. Was this merely the proverbial shot across the bows?

There are two parallels to be drawn, one being the start of his period in government, the second being the end of Imran’s cricketing career. First, as he himself has said, there was no transition, and not just he, but his entire team, had to learn on the job. It seems that the same principle is being applied to the Long March; and the first one took place without preparation, while the next will be better prepared.

That brings to how Imran’s cricketing career ended. The last match he played for Pakistan, say the record books, was the World Cup final against Australia. However, he did not retire after that. It was assumed that he would continue, and captain Pakistan in the upcoming tour of England. There was then a team rebellion led by Javed Miandad, and Imran was then dropped from the tour by the selectors.

There is no Miandad-like figure at present, waiting in the wings to take up the leadership. There can’t really be, for the selectors have not really had the time to build up any figure. That might be one reason for the present neutrality. It should not be forgotten that Imran was not the first person to be selected. So were Zulfikar Ali Bhutto and Mian Nawaz Sharif. It is safe to assume that there are other possibilities, not yet matured, waiting in the wings. However, such a personality would take time to be put on a trajectory that would lead to the Prime Minister’s office.

Imran is moving towards political irrelevance. His supporters have taken a leaf out of his book, and do not accept the blame for his poor showing on March 25, but it is possible that, even with full Supreme Court support, his call for a second round will be answered with even louder silence.At the moment, PTI supporters tell one another that the might of the state was at work, but even if that might is held back, a lot of people will not take the risk of its being unleashed on the day.

Imran must have realised by now that there is a difference between going to see him at a rally, and braving police lathis to do so. He must also have realised that while the Supreme Court might protect his rights, it will not twist the law to favour him. He might have benefitted once from the mercy of the court. He should not expect it to have infinite patience.