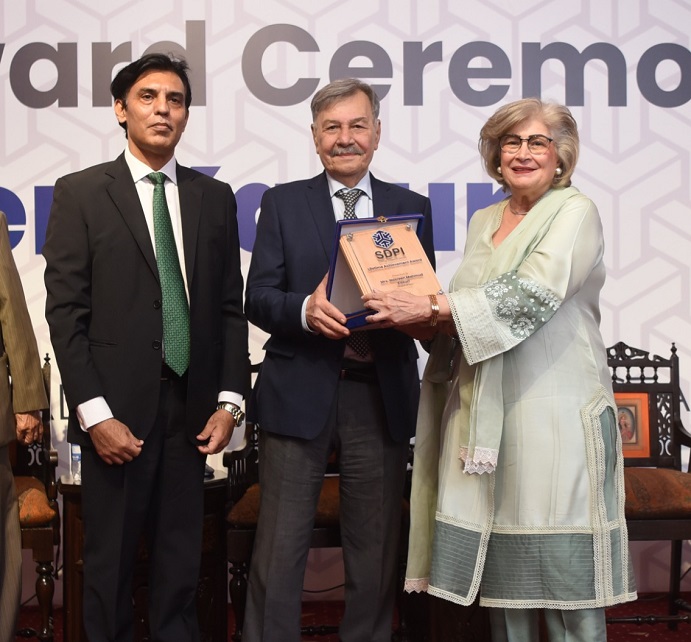 ISLAMABAD: Eminent educationist Mrs. Nasreen Mahmud Kasuri was honoured with the prestigious Living Legend Award for her meritorious services in the field of education.

SDPI’s Living Legend Award is bestowed upon those visionary individuals, who have achieved excellence in diverse fields, including sustainable development, educational and cultural advancement, and the promotion of democratic governance, justice and human rights. The selection of the award recipients is done without any political, ethnic, denominational or gender-based considerations.

The award was presented at a ceremony held here to Mrs Kasuri who is also founder and Chairperson of Beaconhouse Group by the Sustainable Development Policy Institute (SDPI) in recognition of her invaluable role towards the development of the education sector in Pakistan over four and a half decades.

Prominent diplomats, media persons, and representatives from the education sector also attended. On behalf of the Institute, Ambassador (retd) Shafqat Kakakhel, the former UN Assistant Secretary-General and Chairperson of SDPI Board of Governors, presented the award to Mrs Kasuri at the event.

Speaking at the occasion, Mr. Shafqat Kakakhel lauded the role of the living legend for introducing the quality learning system in Pakistan 46 years ago through the Beaconhouse School System.

“We have gathered here to pay tributes to Mrs. Nasreen Mahmud Kasuri in recognition of her outstanding and unique contributions to the promotion of high-quality education from primary up to the higher secondary and even university levels in Pakistan,” he added.

Speaking at the occasion, Mrs. Kasuri said she was truly honored to receive this acknowledgement from SDPI.

“It brings me great pride to see what started as a vision to provide quality education to the children of Pakistan over four decades ago is setting new benchmarks today. It has been a lifetime of learning for me and inculcating values of learning onto thousands of whom have passed out from the Beaconhouse system over the years. Education is fundamental for nation building and I remain committed to offering the skills needed to stand proud and play a role in the future of a prosperous Pakistan,” she added.

Mrs. Nasreen Mahmud Kasuri established Les Anges Montessori Academy in Lahore in 1975 and set the foundation for the Beaconhouse network which has now developed into Pakistan’s largest setup of private educational institutions catering to over 315,000 students.

Employing 62 percent women at Beaconhouse, Mrs. Kasuri’s role has remained pivotal in women empowerment in Pakistan in addition to quality education, offering these women economic opportunities and financial independence. In 2006, she was awarded the Sitaara-e-Eisaar by the Government of Pakistan for her philanthropic contributions to society.

SDPI, established under the Pakistan National Conservation Strategy, is a non-profit organization that serves as a source of expertise for policy analysis and development, policy intervention, and policy programme advisory. The institute focuses on strengthening civil society through research and collaborations, and keeps the country’s development as its top agenda. Through this award, SDPI has earlier extended its gratitude to Madam Nisar Aziz Butt, Agha Nasir, Munnu Bhai, Mr. Shoaib Sultan Khan, Mr Iftikhar Arif, Mr Sartaj Aziz, and Syed Babar Ali Shah.

This recognition for Mrs. Nasreen Mahmud Kasuri by SDPI is a tribute to her efforts towards building generations of young Pakistani men and women into educated, progressive individuals.