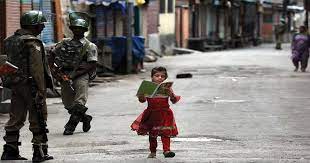 At long last, the puppet delimitation commission has come out with its final “order” on delimitation of the illegally occupied Indian State of Jammu and Kashmir. The Commission recommended seven additional constituencies, six for Jammu and only one for Kashmir, taking the total number of seats to 90 from 83 earlier. This will increase the number of seats in the Jammu Division to 43 from 37 seats earlier, and that in the Kashmir Valley to 47 from 46 earlier. The ‘order” violates the Census norm that seats have to be proportionate with the percentage share of population..

Not only the Kashmiri leaders but also Pakistan has rejected the farcical “order”. National Conference president Dr. Farooq Abdullah reiterated the Party’s stand on the delimitation report, saying “no amount of gerrymandering can change the ground situation in J&K, Ladakh” .  Modi’s dream is to impose a Hindu chief minister on the illegally-occupied state.

At the time of Partition, India knew that its policies with regard to the princely states were inconsistent. For instance, Junagadh formally acceded to Pakistan. Yet, India annexed Junagadh as the princely state had a Hindu majority. By corollary, the disputed Jammu and Kashmir state should have gone to Pakistan as it had a Muslim majority.

India knew that not only the permanent but also the temporary members of the United Nations’ Security Council were in Pakistan’s favour (Josef Korbel, The Danger in Kashmir). So it feared that internationalization of the Kashmir dispute would be against India’s interests.

By changing the status of the disputed Jammu and Kashmir State, India flouted the UNSC resolutions. And, as such, qualified as a rogue state, subject to sanctions.

Sensing the situation then prevailing at the United Nations, Vallabhai Patel presented Kashmir to Liaquat Ali Khan in a platter, so to say, in exchange for Junagadh and Hyderabad. Liaquat Ali Khan did not accept the offer. Saifuddin Soz, former Congress minister, and a prominent Kashmiri politician told The Print Editor-in-Chief Shekhar Gupta on NDTV’s Walk the Talk show that Sardar Patel would have been happy to let Kashmir go to Pakistan in exchange for Hyderabad.

The delimitation order is the last nail in the Kashmir coffin. Since 1947, India has been taking steps to whittle down statehood of the illegally occupied Jammu and Kashmir State. It abolished the office of sadre-riasat and prime minister of the occupied Kashmir. Kashmir had its own Prime Minister and Sadr-e-Riyasat until 1965, when the J&K Constitution was amended.

The plethora of UNSC resolutions confirms that Jammu and Kashmir is a disputed state. Both at the UN and back at home Nehru kept saying that the accession by the Maharajah or the accession by the puppet Kashmir constituent assembly does not amount to an accession by plebiscite as required by the UN. The UNSC itself forbade India from changing status of the state from the so-called accession by the puppet Kashmir assembly under United Nations Council’s Resolution 122, adopted on 22 January 1957. The resolution stated that any action by the constituent assembly of Jammu and Kashmir would not “constitute a disposition” of the State according to the “will of the people” through a plebiscite.

Avtar Singh Bhasin, in his book India and Pakistan: Neighbours at Odds has traced Pandit Jawahar Lal Nehru’s perfidious ever-changing stands on Kashmir. Initially, Nehru forcefully expressed his resolve that plebiscite was the only solution to determining the future status of Kashmir. He told the Kashmiri leader Sheikh Mohammad Abdullah that even independence would be acceptable to him if the Kashmiri people so desired.

At a press conference on 11 June 1951, he was asked `if the proposed constituent assembly of Kashmir “decides in favour of acceding to Pakistan, what will be the position?”’ he reiterated, “We have made it perfectly clear that the Constituent Assembly of Kashmir was not meant to decide finally any such question , and it is not in the way of any decision which may ultimate flow from the Security Council proceedings”. He re-emphasised his view once again at a press conference in New Delhi on 3 November  1951. He said `we have made it perfectly clear before the Security Council that the Kashmir Constituent Assembly does not [insofar as] we are concerned come in the way of a decision by the Security Council or the United Nations’.

It is flabbergasting that during the period 1947 to 1952, Nehru kept harping on commitment to a plebiscite. Yet on 24 July 1952, he declared that the UN resolutions were mediatory, not mandatory, in nature. He said  then, “If the decision of the Security Council was at variance with that of the Constituent Assembly.Unless the Security Council functioned under some other Sections of the Charter, it cannot take a decision which is binding upon us unless we agree to it. They are functioning as mediators and a mediator means getting people to agree”.

By changing the status of the disputed Jammu and Kashmir State, India flouted the UNSC resolutions. And, as such, qualified as a rogue state, subject to sanctions.