‘Frustrated’ Bugti teams up with Zardari 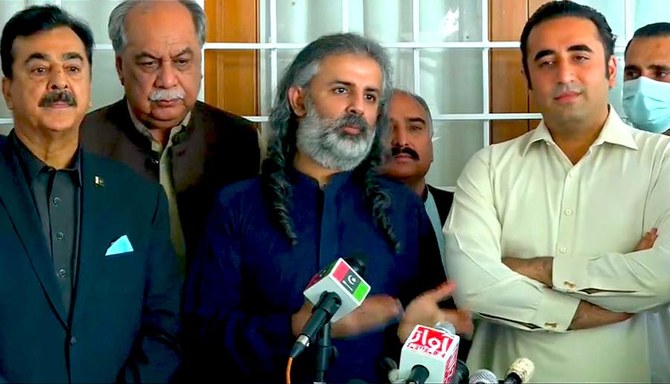 — Questions his commitment to Balochistan prosperity

ISLAMABAD: Baloch nationalist leader and Jamhoori Wattan Party (JWP) chief Shah­zain Bugti resigned from the cabinet on Sunday and announced to vote against the prime minister in the no-confidence vote.

Bugti made the announcement while addressing a press conference in Islamabad alongside Pakistan Peoples Party (PPP) chairman Bilawal Bhutto-Zardari who called on him earlier in the day to “discuss the political situation” in the country, a statement said.

A grandson of former Balochistan chief minister Nawab Akbar Bugti, Bugti was in July last year appointed special assistant to the prime minister on reconciliation and harmony in Balochistan as Imran Khan initiated a process to open dialogue with Baloch influentials.

According to the notification of his appointment, Bugti enjoyed the status of a federal minister.

However, many from the resource-rich province “simply lacked the political clout and purpose required for the humongous task of the reconciliation process” in Balochistan.

Sanaullah Baloch, a lawmaker of the Balochistan National Party-Mengal (BNP-M), told Pakistan Today that Bugti was neither part of the solution nor a part of the problem.

“To be honest, it is a good omen that Prime Minister Imran Khan has adjusted Shahzain but frankly he can’t play a role in the process.”

But today, Bugti claimed the government failed to deliver in Balochistan. “The government gave us hope that things will improve but our people have been disappointed,” he said.

“We are standing with the Pakistan Democratic Movement and will do whatever we can [to address the problems of Balochistan],” he said.

Elaborating on his grievances, he said that when the prime minister first came into power he promised to focus on South Balochistan and under-developed areas. “But he failed to do so.”

However, contrary to his claims, Khan in November 2020 announced an Rs600 billion package for development projects in south Balochistan.

The projects are being implemented in nine districts of the southern province. The federal government provided Rs540 billion and the rest is being spent by the provincial government.

On March 13, a meeting of the Balochis­tan Apex Committee reviewed the progress of work on the package. During the meeting, Chief Minister Abdul Qudoos Bizenjo directed the officials to expedite the work on the projects included in the package.

Bugti also claimed that insurgency grew during the PTI government’s tenure due to its negligence.

Militant attacks are on the rise in Pakistan since the arrival of the Taliban in neighbouring Afghanistan in August last. Experts say Islamic State-Khorasan (IS-K) is shifting its war to Pakistan as it comes under mounting pressure from the hardline group, which has waged a fierce war against its militants in the war-torn country.

In addition to IS-K, Tehreek-i-Taliban Pakistan (TTP) has also claimed responsibility for a string of high-profile attacks in border provinces, underscoring the growing threat the militancy poses to the nation.