Farmers warn of reduction in wheat production due to fertilizer crisis 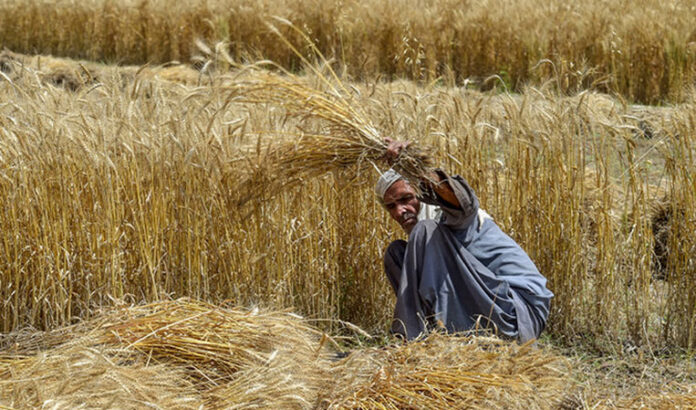 PESHAWAR: Because of the unavailability of fertilizer for wheat crop in Khyber Pakhtunkhwa (KP), the farmers have expressed the fear that grain production will be affected by 40% in the province which is already facing food shortage.
The farmers warned that it would also make it difficult for the authorities to control flour rates in the market because of the low local production as the rate of 20 kilo flour bag has already raised by Rs400 to Rs500.
Arbab Mohammad Jamil, the head of farmers union Daudzai, said that the farmers were urgently needed fertilizers for wheat crop in September and November but it was not available in the market.
He said that it was sold in black due to which it prices was increased manifold. He informed the government has stipulated the urea sack price at Rs1800 but it was available in black at Rs3000 due to the government “incompetence” to maintain the rule of law.
Rizwanullah, head of the farmers’ board, said that the issue is not limited to wheat only as they also could not grow fodder for livestock which will also affecting the milk and meat protection in KP.  He said that low wheat crop will also means low fodder or bhoosa for livestock
Pakistan People Party (PPP) Member Provincial Assembly Ahmed Karim Kundi said that he has brought the issue of fertilizer crisis to the Khyber Pakhtunkhwa assembly however, the government failed to stop its “artificial shortage” in the market.
Kundi warned that now everyone will suffer as this situation continues then there will be severe shortage of wheat and flour in KP which will cause more difficulties for the inflation stricken people.
According to Kundi, KP government has already failed to ensure the supply of wheat to the flourmills due to which mills are now totally depended on Punjab for wheat. He said that the Punjab government often stops the grain supply to KP’s as a result the flourmills are under unending crisis.
Facebook
Twitter
Linkedin
WhatsApp
Email
Previous articlePIMS ink agreement with ChildLife Foundation to modernize Children’s Emergency Room
Next articleIran condemns ‘destabilising’ attack on Baghdad airport

LAHORE: Fayyaz Ahmad Dev is favourite among the three names that had been sent to the federal government from Punjab for the appointment of...
Read more
NATIONAL

MUZAFFARABAD: Pakistan Tehreek-e-Insaf (PTI) is leading with 229 seats in the second phase of the local government elections in Azad and Jammu Kashmir (AJK),...
Read more
NATIONAL

ISLAMABAD: The 48th United Nations Conference on Trade and Development (UNCTAD) Regional Course concluded here on the other day after an overwhelming participation of...
Read more
NATIONAL

ISLAMABAD: The government would utilize funds amounting to Rs100 million, during the current fiscal year, to advance an ongoing project of the Petroleum Division...
Read more
NATIONAL

ISLAMABAD: Exploration and Production (E&P) companies, operating in different parts of the country, have collectively discovered 16 oil and gas reservoirs during the last...
Read more
- Advertisment -

Sindh a land of rich culture, history: US Consul General