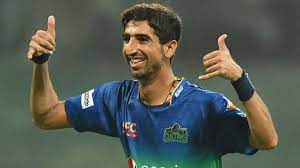 It was a big day for young Shahnawaz Dahani as he made his T20I debut in the Pakistan versus Bangladesh match today. The debutant cricketer marked the occasion with an endearing call to his mother, before the match.

The 23-year-old was extremely happy about his T20i debut and was proud to let his fans know that he dedicates this achievement to his mother.

Later, Pakistan Cricket Board (PCB) shared a video of Dahani’s phone call with his mother before the match. In the video, one can see an excited Dahani receiving lots of prayers from his jubilant mother.

Dahani has amassed fans because of his endearing acts throughout the ICC Men’s T20 World Cup. His fans believe that this man spreads love, light and sportsmanship wherever he goes.

Earlier, Dahani has also spread love and cake amongst Scottish players when the Pakistani team visited Scotland’s dressing room after their match.

He has also spread love and cake amongst Scottish players when the Pakistani team visited Scotland’s dressing room after their match.

It is to note that because of the cricketer’s wholesome nature, he is being called “Pakistan’s foreign minister” by fans.