Taliban replace statue of Hazara leader in Bamiyan with Quran 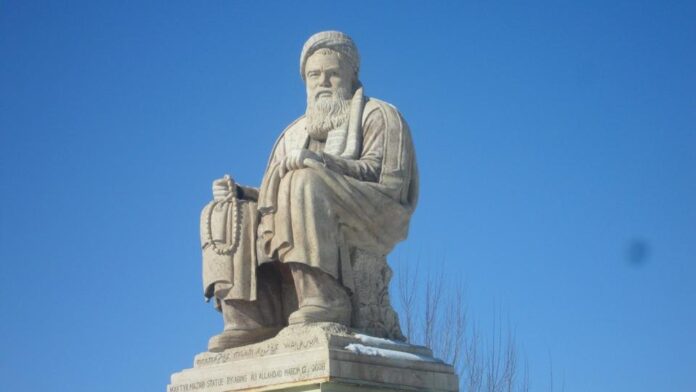 ISLAMABAD: The Taliban have replaced the statue of a Hazara leader declared a national martyr by the former government with a replica of the Quran, Bamiyan residents said Thursday — a move they warned could trigger violence.

The original statue depicted Abdul Ali Mazari, a leader of the mostly Shi’ite minority killed while he was a prisoner of the Taliban during their first stint in power.

The statue was decapitated by a rocket-propelled grenade soon after the Taliban returned to power in August, in an incident residents of the city in central Afghanistan blamed on the hardline Islamists.

The Taliban’s strict interpretation of Islam forbids the human form to be depicted in paintings and sculpture — and printed photographs in extreme cases.

Many businesses have removed or covered up billboards and posters featuring people since the group’s takeover.

“Yesterday, they completely removed the statue and replaced it with a replica of the Quran,” said Abdul Danishyar, a civil society activist in Bamiyan.

“They are trying to wipe out the history from Bamiyan, the people are going to react violently to this,” he told AFP.

Mazari’s statue stood in Bamiyan’s central square, where the Taliban blew up two massive 1,500-year-old statues of Buddha in 2001 — just before the US invasion that ousted them.

The square, named after Mazari, has been renamed “military street”, Danishyar said.

Abdul Ali Shafaq, a Bamiyan provincial council member, told AFP he would talk to Taliban officials and urge them to reverse the move.

“This is a very sensitive issue, it might trigger reactions,” he said.

“People in Bamiyan love Mazari, they were making a new statue to replace the partially destroyed one.”

Mazari, a fiercely anti-Taliban militia leader, was killed in 1995 after being taken prisoner by the Taliban.

They said they shot him after he tried to seize the gun of one of his guards while being transferred aboard a helicopter.

He was officially named a “Martyr for National Unity of Afghanistan” by ousted president Ashraf Ghani in 2016.

The mainly Shi’ite Hazara community, which makes up about 10 per cent of Afghanistan’s nearly 38 million people, has long been persecuted by Sunni extremists, such as the Islamic State group, in a country torn by ethnic and religious divisions.