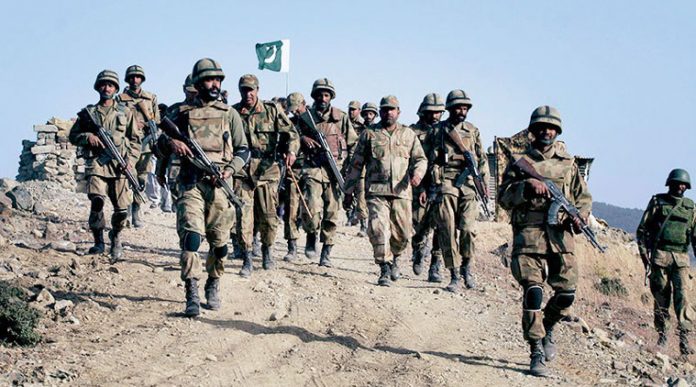 Seven soldiers of the Pakistan Army embraced martyrdom and five terrorists were killed during an intelligence-based operation in the Asman Manza area of South Waziristan, the Inter-Services Public Relations (ISPR) said on Wednesday.

The military’s media wing, in a statement, said the operation was launched on intelligence about the presence of terrorists in the area.

“During intense exchange of fire, 5 terrorists were killed and 7 soldiers embraced shahadat,” said the ISPR.

The security forces cordoned off the area and began a search operation “to eliminate any other terrorists” found in the area, the statement added.

There has been an uptick in attacks on security forces in recent months. Earlier this month, at least four Frontier Corps officials were martyred and 18 others injured in a suicide attack near a check post on Quetta’s Mastung Road.

The ISPR had said that security forces were conducting a clearance operation in the district’s Dosalli area when the IED exploded.

In August, three Levies personnel were martyred and as many injured when their vehicle hit a landmine in Balochistan’s Ziarat district.

LAHORE:  The Punjab government has approved 257 new posts in the health and education sectors to enhance the capacity of the South Punjab Civil...
Read more
HEADLINES

ISLAMABAD: The Supreme Court on Monday slammed the federal government for failing to implement Urdu as the official language despite the passage of six...
Read more
HEADLINES

The State Bank of Pakistan (SBP) on Monday increased the benchmark interest rate by 25 basis points to 7.25 percent for the next two...
Read more
HEADLINES

WILLINGTON: New Zealand Cricket chief David White Monday said the board can think about compensating the Pakistan Cricket Board for the financial losses it...
Read more
HEADLINES

Minister for Railways Azam Khan Swati Monday said that the incumbent government had to swallow a "bitter pill" after the appointment of the chief...
Read more
- Advertisment -