Tanvir Ilyas or Sultan Mehmood – who would have the last laugh?

As lobbying for top job in AJK intensify, PM may opt for a young, bright mind 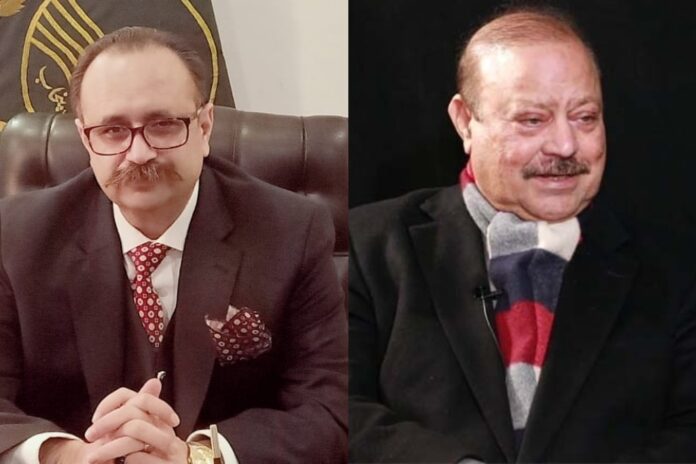 ISLAMABAD: With the landslide victory in elections for Azad Jammu and Kashmir (AJK), the Pakistan Tehreek-e-Insaf (PTI) has witnessed another contest started between top hopefuls for the slot of Prime Minister AJK between veteran party leader Barrister Sultan Mehmood and newcomer property tycoon Sardar Tanvir Ilyas.

According to unofficial results released so far, the PTI has won 26 seats while the Pakistan People’s Party (PPP) bagged 10 and Pakistan Muslim League-Nawaz (PML-N) could clinch win from only 6 constituencies.

Barrister Sultan Mahmood has won the AJK Legislative Assembly seat from LA-3, his parent Mirpur constituency, by defeating his nearest rival Chaudhry Muhammad Saeed of the PML-N by a margin of 3,147 votes, while Sardar Tanvir Ilyas emerged victorious from Bagh constituency.

Barrister Sultan Mehmood is an old hand and has been elected to the AJK Legislative Assembly eight times. He has also served as prime minister AJK from July 30, 1996 to July 24, 2001 when he was associated with the PPP. He joined the PTI in year 2015 when he was a PPP member of the AJK LA.

On the other hand, Sardar Tanvir is a newcomer to the PTI and owns a famous multi-storey residential and shopping complex in the federal capital. He is currently serving as the special assistant to the Punjab chief minister. Tanvir actually belongs to Rawalakot district but opted for contesting from Bagh constituency as a large number of his clan live in Bagh.

On the other hand, Barrister Sultan Mehmood has won the support of the in-laws of Prime Minister Imran Khan and he is making his last-ditch efforts to become the chief executive of Azad Kashmir.

A source in the PTI said that some party stalwarts have also floated a proposal to appoint Sardar Tanvir Ilyas as prime minister and accommodate Barrister Sultan Mahmood by appointing him as president of Azad Kashmir.

Another source told this scribe that Prime Minister Imran may also opt to appoint a young and bright lawmaker if the contest between Barrister Sultan and Tanvir Ilyas intensified.

“I know prime minister well. He must look for a young and bright mind among party lawmakers as both Sultan Mehmood and Tanvir Ilyas are building pressure for the top slot,” the source concluded.