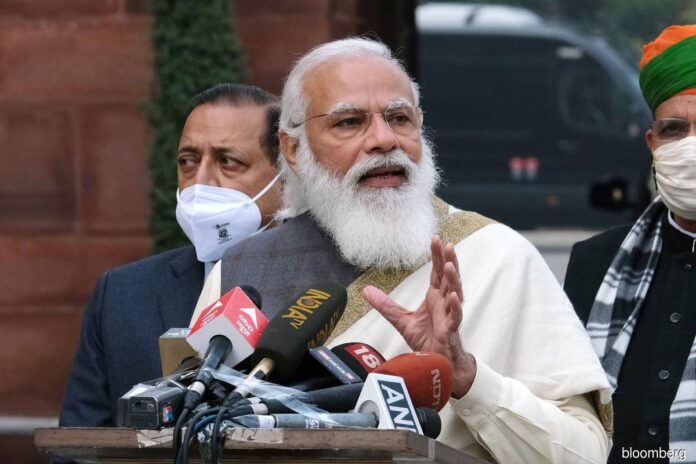 ISLAMABAD: Finally, Indian Prime Minister Narendra Modi Thursday broke his silence over the rumours of restoration of statehood of Indian Occupied Kashmir, hinting at a phased restoration of statehood for Jammu and Kashmir – a measure largely being seen as an artificial move to coverup the illegal annexation of Jammu and Kashmir at the barrel of gun.

Modi posted a series of tweets after a meeting with some pro-India Kashmiri politicians, largely seen as ‘puppets of Delhi’ in Jammu and Kashmir. Narendra Modi, in his tweets, called the meeting held at his residence in New Delhi with politicians an important step in the ongoing efforts towards a developed and progressive J&K, where all-round growth is furthered.

However, Pakistan promptly reacted to the move as chairman of the Parliamentary Committee on Kashmir, Shehryar Afridi, said that such exercises of Indian government of engaging “their own puppets” cannot be a substitute to the aspirations of the Kashmiri people demanding Right to Self-Determination.

According to Indian media, the puppet Kashmiri leaders gave tough time to Modi during the meeting and some made bold statements and criticised Modi’s move to strip Jammu and Kashmir of its provincial status.

In a series of tweets after the meeting, the Indian prime minister said that Thursday’s meeting with political leaders from Jammu and Kashmir was an important step in the ongoing efforts towards a developed and progressive J&K, where all-round growth is furthered.

“Our priority is to strengthen grassroots democracy in J&K. Delimitation has to happen at a quick pace so that polls can happen and J&K gets an elected Government that gives strength to J&K’s development trajectory,” he said.

Modi said India’s democracy’s biggest strength is the ability to sit across a table and exchange views.

“I told the leaders of J&K that it is the people, especially the youth who have to provide political leadership to J&K, and ensure their aspirations are duly fulfilled.”

Home Minister of India Amit Shah said following the meeting that the delimitation exercise and peaceful elections were important milestones in restoring statehood as promised in Parliament.

“We are committed to ensure all round development of J&K,” Amit Shah tweeted.

“The future of Jammu and Kashmir was discussed and the delimitation exercise and peaceful elections are important milestones in restoring statehood as promised in parliament,” he said, adding, “Today’s meeting on Jammu and Kashmir was conducted in a very cordial environment. Everyone expressed their commitment to democracy and the constitution. It was stressed to strengthen the democratic process in Jammu and Kashmir.”

According to various Indian media sources, former chief minister Omar Abdullah sought statehood first elections later. Muzaffar Baig said he asked for article 371 with 35A provision in it till article 370 is decided by the court.

Former chief minister Mehbooba Mufti said she said believed revocation of 370 was morally, legally and constitutionally wrong, and insists on talk to pak, asked for release of detainees, and said she will fight for the restoration of article 370.

Omar Abdullah said that even Indian Prime Minister said bureaucratic government was not good and makes mistakes. He said his party sought reversal of decisions including that of turning Jammu and Kashmir into a union territory, and described delimitation excercise as suspected move.

Meanwhile, Afridi reacted strongly to the meeting held by Modi with Kashmiri politicians, and reiterated Pakistan’s position on Kashmir dispute.

Afridi said that Indian government is actually talking to its own agents in Kashmir falsely portraying them as “Kashmiri leadership”. “It is a situation where Delhi is talking to Delhi,” he said.

Speaking to a delegation of All Parties Hurriyat Conference here, Afridi said that Pakistan will not engage with India until it revokes its decision of illegally annexing the disputed territory.

Afridi said that Pakistan is closely monitoring the situation in Kashmir and constantly getting the feedback from the ground in Indian Illegally Occupied Jammu and Kashmir about the developments in the region.

He said that the new step of the Hindutva government of India of talking with the pro-India politicians of Kashmir is nothing but a facade to hoodwink the international community.

He said that Pakistan has successfully been able to put diplomatic pressure on the Indian state about its violation of the international law and therefore the Indian government wants to befool international community and give a semblance that it has started some sort of democratic process.

He said that these are the same people who have been playing India’s game in the region, and have been rejected by the majority population. He said the actual representatives of the Kashmiri people including the entire Hurriyat leadership is still behind bars since August 5, 2019.

Afridi said that Pakistan is aware of the gambit and the successive Indian governments have always used these maneuvers to deceive the International community.

He said that the bogey of returning statehood is not a step towards restoring the August 5, 2019 decisions, but, in fact, strengthening the occupational structure in the disputed territory.

“We have defeated the Indian designs since the illegal annexation of the disputed region and will continue to do so and tell the international community that Kashmir is a dispute and continues to burn,” Afridi said.

He said these exercises of Indian government of engaging “their own puppets” can’t be a substitute to the aspirations of the Kashmiri people demanding Right to Self Determination. He appealed the international community not to get fooled by these cosmetic steps by India. He said that Pakistan stands committed to the Kashmiri’s right to self-determination and would do anything to ensure that Kashmiris get their birth right of freedom from India’s illegal occupation.