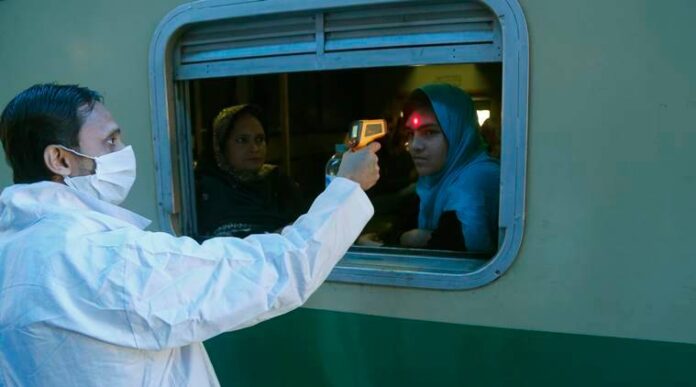 NEW DELHI: India’s laboratories are struggling to keep up with a punishing Covid-19 surge, as its scientists try to track and understand new coronavirus mutations.

On Monday, the World Health Organization classified a variant first identified in India, known as B.1.617, as a “variant of concern,” saying preliminary studies suggested it may be more contagious than other variants. The WHO’s scientists didn’t report any evidence that vaccines aren’t effective against the new variant.

India is in the process of ramping up its capacity to do genomic sequencing to track changes in the virus’s genetic makeup by examining positive test samples. Yet the effort in India, which is dealing with the world’s worst current Covid-19 outbreak, is a fraction of the scale of the genomic sequencing being done in the UK.

Ten laboratories in India are working on the sequencing, with a combined capacity of processing 1,000 samples a day. “The labs have done a fantastic job to rise to the challenge,” said Shahid Jameel, a virologist who is head of the scientific advisory committee for India’s national sequencing effort.

But the surge has made it harder for the labs to do the sequencing work. Many of the staff are sick, caring for sick family members or quarantining because of possible exposure. Lockdowns are making it harder for staff to get to laboratories. Supplies such as reagents needed for sequencing work are in short supply, while getting the samples from India’s states is a logistical challenge, scientists said.

Ravi Vasanthapuram, a virologist at the National Institute of Mental Health and Neuro-Sciences, at Bangalore, which is part of the sequencing network, said only 40% of the personnel at his laboratory are able to work on the sequencing now. The rest are down with Covid-19 or quarantined after exposure.

“India is new to sequencing. Only in the last month is the capacity reaching its full level. There are a lot of constraints in terms of manpower and reagents, which is getting sorted out now,” said Dr. Vasanthapuram.

India is sequencing far less than 1% of daily positive samples. An early goal was to aim for 5% of cases, but that became unrealistic once cases ballooned. The world leader, the UK, has been sequencing up to 10% of samples at points in the pandemic.

Saumitra Das, director of the National Institute of Biomedical Genomics, based near Kolkata in eastern India, who is managing the sequencing work nationally, said that he is in talks to add more laboratories to scale up the work. He said that the B.1.617 variant is outpacing other variants, including the variant first identified in the UK.

In recent months in India, the changes in the virus added to a volatile mix of risky human behavior, as the country let its guard down, public-health experts say. As the virus numbers dropped, some people stopped wearing masks and social distancing, and large events such as religious festivals and election rallies went ahead.

“Super-spreading events lit up like sparks, leading to a big fire. That could be crowding indoors with no Covid-appropriate behavior, rallies, all these things added up,” said Dr. Vasanthapuram. “On to that cauldron you drop a mutant. Naturally it is going to increase transmission in the community.”

The same super-spreader events that contributed to the surge also helped more infectious variants evolve and disseminate in the population, said Dr. Jameel.

The B.1.617 variant was first detected in the western Indian state of Maharashtra in October. The government announced its presence in late March, but said at the time that there wasn’t sufficient data to show it was behind the surge in cases. At the time, the government said there were some 771 variants circulating, including the B.1.1.7 variant identified in the UK. Unlike the first wave, the government was reluctant to impose lockdown measures that restricted economic activity nationally.

The B.1.617 variant has now been found in more than 30 countries, according to the WHO, including the US, the UK, France and Japan.

B.1.617 is the fourth to be classified by the WHO as a variant of concern. The U.N. agency has also given the same designation to the B.1.1.7 variant, the B.1.35 variant found in South Africa and the P.1 variant discovered by researchers in Brazil.

Recent research on the B.1.617 variant—not yet peer-reviewed and published—has shown that it broke through to infect fully vaccinated staff at a hospital in New Delhi, though none of them got seriously ill. A separate paper, also available before publication, found that the variant showed evasion against a drug cocktail often used on Covid-19 patients and that it had better entry into some cell lines, mainly in the lungs and gut. The paper also found the variant “evaded antibodies induced by infection or vaccination, although with moderate efficiency.”

Independent epidemiological models forecast a peak in India’s second wave around the middle of this month. India is now attempting to increase vaccinations, some states have imposed lockdowns, and much of the public has returned to taking pandemic precautions. But the toll will be punishing for months to come, experts say.

“The explosive epidemic in India took us all by surprise,” said Christopher Murray, director of the Institute for Health Metrics and Evaluation in Seattle. “Vaccines are not going to stop the terrible death toll in the month of May. It just won’t come soon enough.”

The task for India’s scientists sequencing virus samples is to prevent yet another mutation from fueling further surges. Beyond that, sequencing is important for updating vaccines.

“We don’t know what will be the next variant. The sequencing has to continue,” said Mr. Das, who is managing India’s national sequencing work.

This story originally appeared in the Wall Street Journal