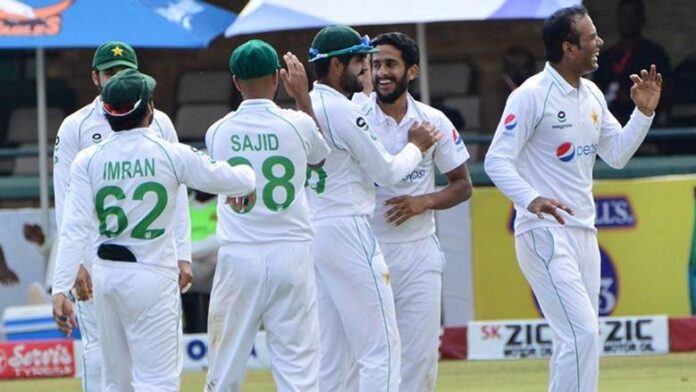 HARARE: Seamer Hasan Ali took nine wickets in the match as Pakistan defeated hosts Zimbabwe by an innings and 116 runs after tea on the third day of the first Test at the Harare Sports Club on Saturday.

Hasan moved past 50 Test wickets as he took a career-best 5-36 to help bowl Zimbabwe out for 134. He recorded figures of 4-53 during the home side’s first-innings score of 176.

Pakistan posted 426 in reply, anchored by Fawad Alam’s superb 140 which put the tourists into a commanding position.

Tarisai Musakanda top-scored in Zimbabwe’s second innings with a career-best 43 before he was needlessly run out chasing a suicidal third run.

It was a wasted opportunity for the batsman who had been elevated from his usual number three position to open due to an injury to Prince Masvaure who did not bat in the second innings.

Hasan’s ability to get reverse swing on the slow surface helped him rip through the Zimbabwe middle and lower order, and he was ably supported by left-arm spinner Nauman Ali (2-27).

Fawad’s 140 from 204 balls included 20 fours, before he was the last man out chasing quick runs to boost his side’s total.

He became the fourth wicket for seamer Blessing Muzarabani (4-73) after a bottom edge that well taken by wicketkeeper Regis Chakabva. Seamer Donald Tiripano completed figures of 3-89.

Fawad, who takes a bizarre front-on stance at the crease, has now scored a century on all four occasions he has passed 50 in Test cricket. Openers Imran Butt (91) and Abid Ali (60) also scored fifties for the touring side.

The second and final Test will be played at the same venue from Friday.