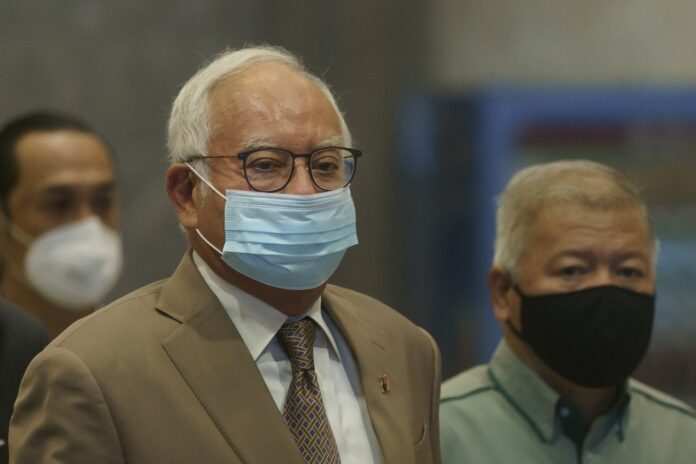 PUTRAJAYA: A Malaysian court Monday began hearing an appeal by ex-Prime Minister Najib Razak to overturn his conviction and 12-year jail sentence linked to the massive looting of the 1MDB state investment fund that brought down his government in 2018.

The appeal came more than eight months after a high court found Najib guilty of abuse of power, criminal breach of trust and money laundering, making him the first Malaysian leader to be convicted. He has said he was misled by rogue bankers and that the case against him is political.

The ruling was part of the first of several corruption trials against Najib that are linked to the 1MDB scandal, which sparked investigations in the US and several other countries. US investigators alleged that over $4.5 billion was stolen from 1MDB and laundered by Najib’s associates.

Najib, 67, arrived at the Court of Appeal early Monday but didn’t speak to reporters. Najib, who set up 1MDB shortly after taking office in 2009, has denied all wrongdoing and his sentence was stayed pending the appeal.

Last July, Najib made brief remarks under oath before his sentencing, saying he wasn’t aware of the 42 million ringgit ($10 million) channeled into his bank accounts from SRC International, a former 1MDB unit.

But the judge ruled that Najib’s argument that he was duped by Malaysian fugitive financier Low Taek Jho into believing the money was part of a donation by the Saudi royal family, to keep Najib from being suspicious of 1MDB plundering, was far-fetched and a weak fabrication.

Investigators have identified Low as the mastermind behind the looting of 1MDB and he remains at large.

Najib’s second and third trials involving some of the remaining charges are ongoing. His wife and several officials from his party and the previous government have also been charged with graft related to 1MDB corruption.

Biden ready to announce US withdrawal, even as peace eludes Afghanistan

WASHINGTON: President Joe Biden’s planned announcement on Wednesday of a complete US withdrawal from Afghanistan by September 11 aims to close the book on...
Read more
World

BEIJING: China and the United States should step up their communication while managing their differences and respecting each other’s core interests, Chinese Premier Li...
Read more
World

TEHRAN: The latest attack at the Natanz nuclear facilities and sanctions will not give the United States leverage in talks to restore Iran’s nuclear...
Read more
- Advertisment -