Remembering Zulfiqar Ali Bhutto: A leader of all generations

Everyone across the world, who believed in democracy, was devastated on the eve of April 4, 1979 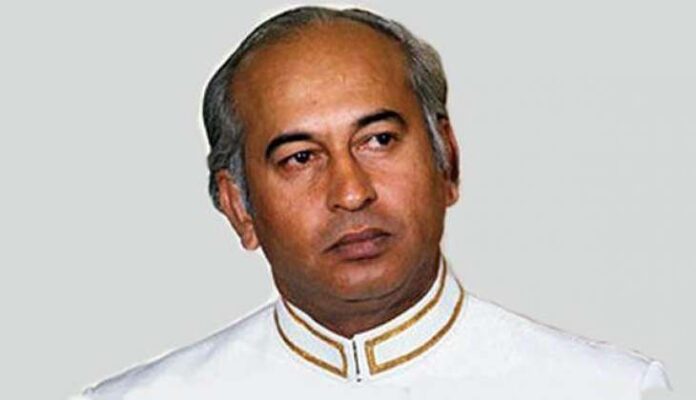 This year marks 42 years since the judicial killing of the founder of Pakistan People’s Party, Zulfiqar Ali Bhutto. A truly charismatic and popular leader whose legacy of politics for the common people of Pakistan continues to inspire even today. He might be polarizing for some because of his strong stance on matters but he was never tainted by allegations of corruption.

The Lahore High Court announced the ruling of death penalty for Mr. Bhutto on March 18, 1978. Not only heads of various countries but even the secretary general of the United Nations made appeals for clemency to General Zia. It was an open secret that there was biasness and personal grudge evident in the conduct of Chief Justice of Lahore High Court, Molvi Mushtaq Hussain.

On April 4, 1979, Mr. Bhutto was hanged. Zia ul Haq killed his most daunting rival in a false murder case. This news generated a strong protest from around the world. World leaders condemned this act and international newspapers deemed it as political murder. “Mr. Bhutto was denied justice!’ was the common consensus.

Pakistanis residing abroad, especially in London and Europe, registered their protest in large demonstrations. Mir Murtaza Bhutto launched a global protest movement from Birmingham. Pakistani and Kashmiri community came together in an exemplary chain of unity. A large number of people attended his funeral in Hyde Park. This was followed by a demonstration where streets of London witnessed slogans of “jiyaye Bhutto!”

Everyone across the world, who believed in democracy, was devastated on the eve of April 4, 1979, as they mourned the death of the strongest voice for the people of Pakistan. A voice that brought together the Muslim World. A voice that spoke against the callousness of the world on the plight of the Kashmiri people. This voice was silenced. It was a great loss and a severe setback to the dream of an independent, democratic Pakistan ruled by the common people.

There is no doubt that Mr. Bhutto was a master of the table and dialogue. His successes in foreign policy are innumerable. He was a bridge between the third world countries and the rich and mighty, without compromising dignity. He promoted friendly relations with China and our country is still reaping its benefits. His determination in setting up an atomic reprocessing plant meant that Pakistan could become a nuclear power. Mr. Bhutto chose to be a voice for the downtrodden and highlighted the issue of Kashmir in the United Nations. He took politics from the drawing rooms to the common people. In true spirit, he worked towards empowering the people and brought them to the parliament. One of his many noteworthy achievements include the 1973 constitution that provided framework for relationship at the federal and provincial levels.

The military dictator, Zia ul Haq, could not accept a popular leader who had such a stronghold on the hearts of the common people and devised a way to severe this connection. In a special interview to Masawat Weekly London, Begum Nusrat Bhutto said, “This was not a murder case against the Prime Minister but it was murder of justice. We want justice for an innocent person who was the elected representative of the people. His people demand justice.”

Justice was not easy to come but the people won and the legacy of Mr. Bhutto was carried forward by his children and his grandchildren. Mr. Bhutto’s contributions have been recorded forever in the annals of history.  Today, people remember him as the leader who chose not to compromise on his principles. Despite offers of clemency, Mr. Bhutto made a choice that only a leader of his stature could have made. He chose to stay alive in history over an extension of physical life for the people of Pakistan. As a result, his memory is etched in the hearts and minds of the people of all generations of this nation.

Amid the raging pandemic in the southern Indian state of Maharashtra, the anti-terrorism squad arrested  on May 6, two persons (Jagar Jayesh Pandya and...
Read more
Comment

Washington Watch While reading Human Rights Watch’s (HRW) monumental report “A Threshold Crossed” I felt a range of emotions. It also left me with one...
Read more
Comment

Conquering without fighting in the field

Scads of wars have been waged throughout human history with distinct ways and weapons. Different kinds of military tools and techniques were used to...
Read more
Comment

Why the USA failed in Afghanistan

While the intra-Afghan dialogue still seems a non-starter in terms of any substantive progress on the political future of the country and the modalities...
Read more
- Advertisment -