The image first appeared on a Persian-language Twitter feed that carried a link to Ayatollah Ali Khamenei’s website. Twitter took down that feed on Friday, saying it was fake. 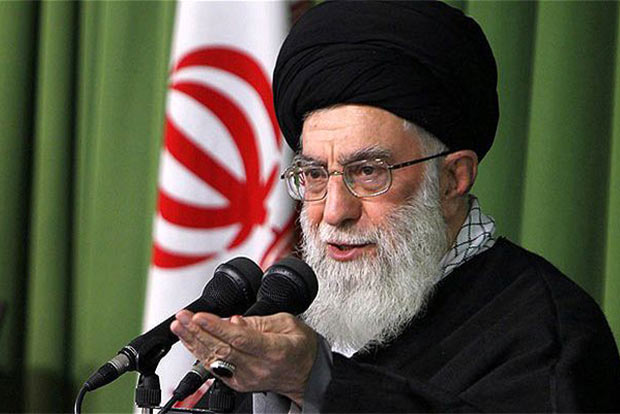 DUBAI: The website of Iran’s Supreme Leader on Friday carried the image of a golfer resembling former President Donald Trump apparently being targeted by a drone alongside a threat of revenge over last year’s killing of a top Iranian general in a US drone attack.

The image first appeared on a Persian-language Twitter feed that carried a link to Ayatollah Ali Khamenei’s website. Twitter took down that feed on Friday, saying it was fake.

Underneath the website picture were remarks by Khamenei in December ahead of the first anniversary this month of the killing of military commander General Qassem Soleimani in Iraq, which was ordered by Trump.

“Both the murderers and those who ordered it should know that revenge may come at any time,” said the comments on top of the image, which showed the shadow of a drone looming over the lone golfer. Trump, who regularly plays golf, was not named.

Tehran retaliated for Soleimani’s killing with missile strikes against US targets in Iraq but the two sides backed away from further confrontation.

High tension and risk of war appeared to subside with the end of Trump’s term. His successor President Joe Biden, sworn in on Wednesday, has said Washington seeks to lengthen and strengthen the nuclear constraints on Iran through diplomacy.

Emily Horne, a spokeswoman for the Biden White House National Security Council, said “these kinds of threats from Iran are unacceptable.”

“We strongly condemn this provocative action. We will continue to work with our friends and partners to counter Iran’s malign influence,” she said in response to a request for comment.

The top Republican on the US House Foreign Affairs Committee, Michael McCaul, earlier urged the Biden administration “to respond quickly and forcefully to this provocative threat against a former president” and called on Twitter to immediately and permanently suspend Khamenei’s account.

An official close to Khamenei’s inner circle said: “The aim (of the tweet) was to remind the gambler (Trump) that leaving office does not mean he will be safe and the assassination of our martyr Soleimani will be forgotten.”

“And now, American troops cannot protect him,” the official, who asked not to be named, told Reuters without elaborating.

Soleimani, the commander of Iran’s elite Quds Force, was responsible for clandestine overseas operations and was widely seen as the second most powerful figure in Iran after Khamenei.

Iran’s military and clerical rulers have said Tehran would choose the time and place of Soleimani’s revenge.

A Tehran-based analyst said the threat could be an end in itself: “The intention of the tweet seems to be keeping alive the specter of revenge, which perhaps by itself is a kind of revenge.”

The golfer image tweet was retweeted by Khamenei’s main Persian-language account @Khamenei-fa, although it appeared to have been deleted later. The text and graphic of the tweet later carried by Khamenei’s official website (farsi.khamenei.ir) was also widely quoted by Iranian media.

Earlier this month, Twitter removed a tweet by Khamenei in which he said US- and British-made vaccines were unreliable and may be intended to “contaminate other nations” for violating its rules against misinformation.

Exiled rights activists renewed calls for Twitter to ban Khamenei. “I hope the world can see how they (Iranian officials) can use social media to promote violence,” US-based activist Massih Alinejad told Reuters.

Twitter permanently suspended Trump’s account following the January 6 storming of the US Capitol by some of his supporters, citing the risk of further incitement of violence.

Iran's Supreme Leader Ayatollah Ali Khamenei called on Muslim nations on Friday to keep fighting against Israel, which he said was not a state...
Read more
World

GENEVA: The World Health Organisation approved a Covid-19 vaccine from China's state-owned drugmaker Sinopharm for emergency use on Friday, a boost to Beijing's push for...
Read more
World

BEIJING: The resumption of student visa applications at US missions in China got off to an acrimonious start this week when netizens took exception...
Read more
- Advertisment -

May 7, 2021
ISLAMABAD: Several young leaders from China and Pakistan on Friday said that China-Pakistan Economic Corridor (CPEC) would take people-to-people ties between the countries to next...

Holding others responsible for own failures