Iran resumes 20pc enrichment at Fordow amid rising tensions with US 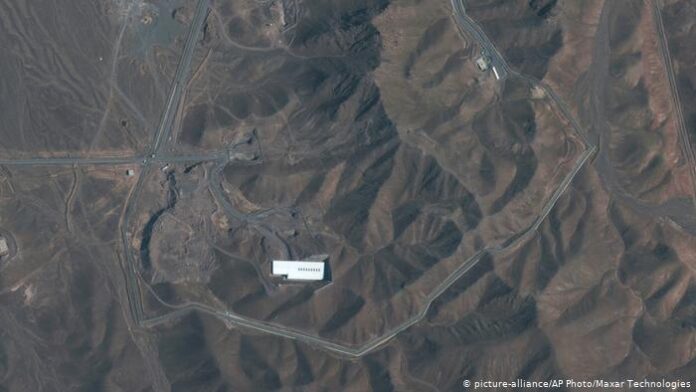 Benjamin Netanyahu, prime minister of Iran’s arch-foe Israel, said the move was aimed at developing nuclear weapons and Israel would never allow Tehran to build them.

The enrichment decision, Iran’s latest contravention of the accord, coincides with increasing tensions between Iran and the US in the last days of President Donald Trump’s administration.

Tehran started violating the accord in 2019 in a step-by-step response to Trump’s withdrawal from it in 2018 and the reimposition of US sanctions lifted under the deal.

The agreement’s main aim was to extend the time Iran would need to produce enough fissile material for a nuclear bomb, if it chose to, to at least a year from roughly two to three months. It also lifted international sanctions against Tehran.

The UN nuclear watchdog confirmed that Iran had started the process of enriching uranium to 20 percent purity at its Fordow site.

“Iran today began feeding uranium already enriched up to 4.1 percent U-235 into six centrifuge cascades at the Fordow Fuel Enrichment Plant for further enrichment up to 20 percent,” the IAEA said in a statement on a report that was sent to member states.

The step was one of many mentioned in a law passed by Iran’s parliament last month in response to the killing of the country’s top nuclear scientist, which Tehran has blamed on Israel.

“Our measures are fully reversible upon FULL compliance by ALL (parties to the deal),” tweeted Iranian Foreign Minister Mohammad Javad Zarif.

Tehran insists it can quickly reverse its breaches if US sanctions are removed. Biden, who takes office on January 20, has said the US will rejoin the deal “if Iran resumes strict compliance” with the pact.

The Biden transition team declined to comment on Monday about Iran’s enrichment move.

Tehran’s move could hinder efforts to salvage the nuclear pact as its breaches have increasingly worried some of the deal’s other parties, which have urged Iran to act responsibly.

However, it could also be accumulating bargaining chips that could be negotiated away in talks with the Biden administration.

A US State Department spokesperson accused Iran of “nuclear extortion.”

In Brussels, a European Union Commission spokesperson said that the “move, if confirmed, would constitute a considerable departure from Iran’s commitments”.

On January 1, the IAEA said Tehran had told the watchdog it planned to resume enrichment up to 20 percent at the Fordow site, which is buried inside a mountain.

“The process of gas injection to centrifuges has started a few hours ago and the first product of uranium hexafluoride (UF6) gas will be available in a few hours,” Rabiei said.

Iran had earlier breached the deal’s 3.67 percent limit on the purity to which it can enrich uranium, but it had only gone up to 4.5 percent so far, well short of the 20 percent level and of the 90 percent that is weapons-grade.

US intelligence agencies and the IAEA believe Iran had a secret, coordinated nuclear weapons programme that it halted in 2003. Iran denies ever having had one.

In Jerusalem, Netanyahu said Iran’s enrichment decision could be explained only as a bid to “continue to carry out its intention to develop a military nuclear programme”.

“Israel will not allow Iran to produce nuclear weapons,” he added.