11 miners gunned down in Balochistan 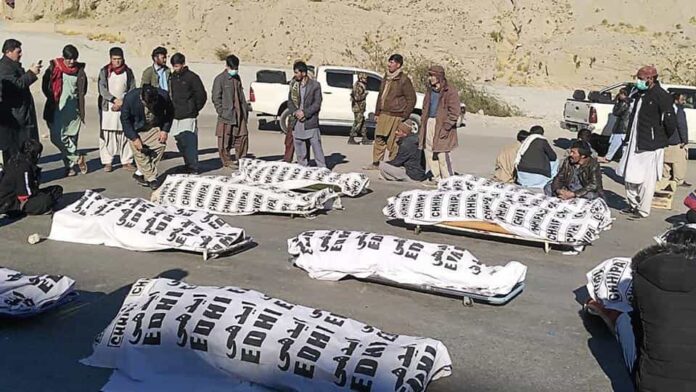 –IS claims responsibility for the attack

QUETTA: At least 11 coal miners belonging to the minority Shia Hazara community were killed in the Mach town of Balochistan’s Bolan district early Sunday morning after militants abducted them and took them to nearby hills before opening fire at close range, Quetta deputy commissioner Murad Kasi confirmed.

The injured miners were shifted to Mach Hospital, said police.

Moazzam Ali Jatoi, an official with the Levies Force, which serves as police and paramilitary in the area, said that the attack took place near the coal mine.

Jatoi said that armed men took the coal miners to nearby mountains, where they opened fire on them. He said that six of the miners were dead on the spot and five who were critically wounded died on the way to a hospital.

The official said that an initial investigation revealed the attackers identified the miners as being from the minority Hazara community and the gunmen took them away for execution, leaving others unharmed.

However, speaking to Reuters on the condition of anonymity, a security official said, “The throats of all coal miners have been slit, after their hands were tied behind their backs and (they were) blind folded.”

Security forces were also seen spreading out in the mountains to search for the perpetrators.

Prime Minister Imran Khan condemned the miners’ killing on Twitter, wherein he said: “The condemnable killing of 11 innocent coal miners in Machh Balochistan is yet another cowardly inhumane act of terrorism. Have asked the FC to use all resources to apprehend these killers & bring them to justice. The families of the victims will not be left abandoned by the govt”.

Speaking on the incident, Balochistan Chief Minister Jam Kamal expressed sorrow over the loss of life and sought a report from the concerned authorities.

Kamal also directed the authorities to spare no effort in arresting those responsible for the terrorist attack, vowing for the elements involved in terrorist incidents to be brought to justice.

Balochistan government spokesperson Liaquat Shahwani said that the terrorists would be punished and condemned the loss of life.

According to the official Pakistan People’s Party (PPP) Twitter handle, Chairman Bilawal Bhutto-Zardari also condemned the incident and termed the killings of innocent labourers as the worst form of terrorism.

Provincial Home Minister Mir Zia Langau strongly condemned the attack on workers and sought a report from the authorities concerned.

“No stone should be left unturned in the arrest of the accused,” he said. “An unsuccessful attempt is being made to sabotage the peace of the province,” the home minister added.

Similarly, in a tweet, Federal Minister for Information and Broadcasting  Shibli Faraz said that the external enemy is trying to destabilise Pakistan and constantly attacking and expressed deep grief over the incident. He added that the foes of the country will face failure in their nefarious designs.

Islamic State later claimed responsibility for the attack, through its Amaq news agency via its Telegram communications channel.

The attack came after a relative quiet in nearly a year of violence against the mainly Hazara minority in the province.

In April, a market suicide bombing killed 18 people, half of whom were Hazaras.

Following Sunday’s attack, members of the Hazara minority in Quetta blocked the western bypass and set fire to tyres to protest against the killings.

Baluchistan is the focus of the $60-billion China-Pakistan Economic Corridor (CPEC), a transport and energy link planned between western China and Pakistan’s southern deepwater port of Gwadar.

Hazaras have been frequently targeted by Taliban and IS militants and other militant groups in both Pakistan and Afghanistan.

The attacks in Afghanistan have been claimed by an affiliate of IS.

In 2013, three bombings killed more than 200 people in Hazara neighbourhoods in Quetta.