It’s an intermission, not the end of hybrid 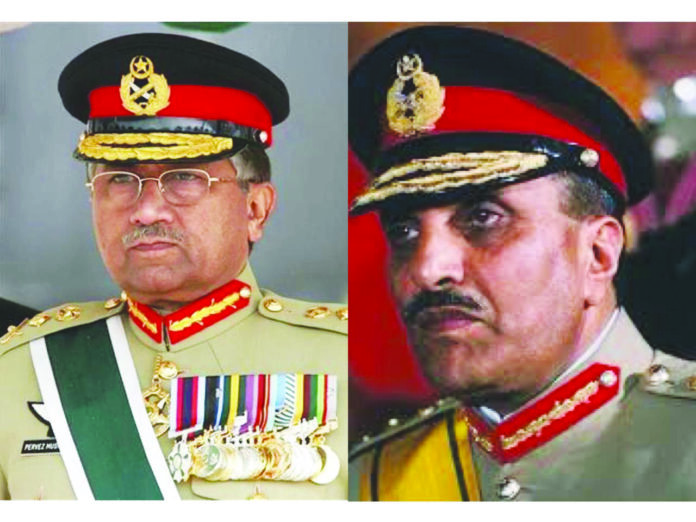 Twitter, a sanctuary of all types of political handles, is flooded with obituaries of what people say is the hybrid system of governing Pakistan. For Pakistani handles, it seems that an era has ended and there is going to be a new beginning, regretfully with the same old faces, arrangements and basic ground realities. The hybrid arrangement, which was conceived through actions during the Zia years (1982-88), graduated into a well thought out plan during the Musharraf years (2002-2008) and was practiced on a trial run during the 2009-2018 period.

However, the hard fact is that the system has not retreated. It has only changed its form and faces. As the article goes into the press, many changes in the command structure might have taken place. The sorry aspect of that is that the media is projecting the change in an institution as if the new king has been put on the throne or things are actually changing for the ‘good’. Given the mindset of the media, the society and the powers who matter, it is just an intermission or semblance of the same. Nothing has changed for good or bad.

As expected, the current honeymoon of no political role will soon give way to the same old routine; another hybrid in the development stage; God forbid; with the people fed on diversionary storytelling to keep their attentions away. The pathetic show must go on as the powerful and their hangers-on desire so… Long live the King; and people at the mercy of God…

To have a historical retrospect of what happened during the last one decade and before; the PTI’s four years’ rule was a formal launch of the system. The most dangerous aspect of that arrangement was that apparently, there were no changes in the constitution of 1973, or any changes in the rules of business. Articles of constitution which safeguard the basic human rights of the average Pakistani and specifically direct the system as well as the institutions involved to explain in detail when even a single person is bothered through law enforcement agency abduction. Apparently, it was a civilian rule in the front; but actually, there were too many ‘shadow commanders’ at work; to borrow the phrase coined by Iranian diaspora journalist Arash Azizi for his book Shadow Commander. Earlier than the PTI rule, there was still some decency across the divide, which evaporated altogether after August 2018.

Looking at history, such intermissions as claims of ‘withdrawal from active politics’ have been part of the responses, which have been guided by events. The events, international and domestic, have been instrumental in sometimes someone taking a step back or going onto the back foot.

The 1971 debacle, whose 51st anniversary is just weeks away, was the time when such a retreat, rather a tactical retreat, was undertaken. The rationale of that retreat was that after accruing so much embarrassment through the physical dismemberment of the country, there was no moral high ground left to insist on legitimacy of control. Consequently, the civilian order was allowed the space, where it could sit down and formulate the first and the only agreed upon constitution, the 1973 constitution.

That was practically the only moment when the civilian order had somewhat dominant control. The period was soon to be followed by civilian strife, which resulted in a chain of events; which precipitated the 1977 military takeover, followed by 11 years of dictatorship. The international event in the form of THE USSR’S invasion of Afghanistan, was enough to legitimize the then military interference as both a dominant partner as well as the dictating authority.

Consequently, the death of the President, HIS inner circle and a number of generals in the 17 August 1988 C-130 crash was another moment of retreat for the established order. At that point of time, the order retreated, but was not out of sight. The succeeding popular political order had no blank cheque then; as many on 2 December  1988 might have thought over in a misplaced hope as is now. In A few words, the established order was very much in control then, as now, despite the cries of A new era. The events in December 1988, forced the then PPP government under Benazir Bhutto to accept the IMF-nominated central bank chiefs, economic managers, Afghan policy and the other legacies of THE Zia period as such, if IT wanted to continue with its rule in Pakistan and Sindh.

The reasons for that pessimism now emanate from the fact that the ground realities have not changed. Every political group, including the PTI, has found ‘courting the powerful’ as the recipe of power sharing. None of the radicals or the political groups ever wanted to dismantle the old order, rather TO have their share to survive.

If that has not been the case, the hybrid model could not have been born in the first place. The willingness of the civilian order to have a piece only of the cake allowed the established order to transgress the previously undefined domains or rather add more to that. It is a hard fact that when the ‘neutrals’, as the ‘feeling-cheated’ PTI coined the term for its original ‘coalition partners’, parted ways with the latter political group, everything from foreign policy, human rights issues, economic policy and day-to-day management of the country was influenced by the established order. With such infection of the system which had the support of the western order led by the USA, sometimes in the form of Air Force drills in major AFBs, foreign office positions as well as ground level marginalization of the groups suspected to be against the established order; because of ‘race and ethnicity’ or based on ‘belief’, there was simply no reason for any Cypher. It was an intimate ‘blackmailing’ to force the ‘estranged’ to ‘follow the line’. To market that ‘all within the family’ dispute asa  battle of truth and falsehood was even more objectionable; to say the least.

The analysis undertaken above cautiously points out to the stark reality that the current lull in the meddling is a temporary phase; not to be mistaken with a change of heart or a change of ground realities; or for that matter a “regime change of minds”. Regretfully, Pakistan remains the same old one with a few cosmetic changes in faces.

The last eight months’ political circus has proven the pathetic low-level political discourse of the Pakistani political scene. Pakistan’s only silver lining is the slow human development taking place now and possibly a politically vibrant middle income leadership which will replace the incumbent societal cadres; not the ‘fast food joint’ type, but the one embedded in local realities and willing to take on the state. Decades ago in a Toronto-based periodical Crescent International the exiled political ideologue of the 1950s diaspora;,lthe ate Dr. Kalim Siddiqui, prophesied that the “established order needs to be defeated on the streets of Pakistan” is the only solution available.

As expected, the current honeymoon of no political role will soon give way to the same old routine; another hybrid in the development stage; God forbid; with the people fed on diversionary storytelling to keep their attentions away. The pathetic show must go on as the powerful and their hangers-on desire so… Long live the King; and people at the mercy of God…