Floods and The Climate

Things will get worse 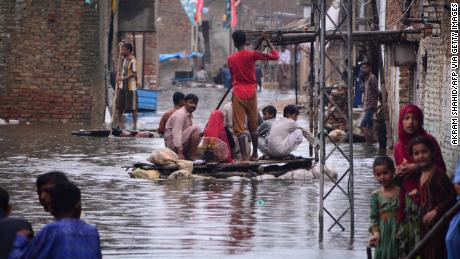 Every year Pakistan faces floods but the preparation to escape them is never the priority. Even in 2010 Pakistan faced a super-flood but even then things were not taken seriously. 20 million people were affected in 2010. Emergency was declared. However, floods in 2022 are worse. More than 40 million people have been affected, which means seven times more people than those internally displaced by the Ukraine war, or roughly 94 percent of the population of Canada. Hundreds have died or been injured, with numbers still rising. Floods inflicted more than $10 billion in losses across Pakistan.

These torrential rains are the main cause of flooding triggered by climate change, for which developed countries are the culprits. Food insecurity and inflation has literally paralysed not only the middle class but flood victims. Over a third of the country has drowned in the flood waters. Economic situation is grim already. Pakistan is considered the ground zero of global warming and the fifth country most vulnerable to climate change, says German Watch Report.

There is a lack of dams, water reservoirs, planned urban settlements and reforestation. Human catastrophe is at its peak. Over half a million pregnant women are in dire need of care in flood-hit areas. Seventeen percent of the population are suffering badly. Even so nearby cities will have to sustain the exodus from flood-hit areas. More than 0.75 million livestock have been lost. From the 1990s average temperature has kept on increasing.

Climate change is a reality and it is occurring now. Extreme weather conditions get a boost from climate change. Floods are also because of climate change. These events even become frequent, they occur more and become more intense.

Often people have a misunderstanding about global warming, that because of global warming there will be more heat. But we cannot always conclude this. Due to climate change, there is an increase in extreme weather events. It means summers will become hotter but winters may become colder and unexpected weather events and natural disasters will become more frequent and more severe.

Today, the situation has deteriorated so much that only policy changes at the government level can bring about real change. Firstly, the subsidy on fossil fuels needs to be removed. Secondly, all the governments in the world need to push for electric cars. Irresistible incentives have to be given for the purchase of electric cars. Thirdly, they need to levy a Carbon Tax. So that the companies get motivated to use less fossil fuels. Fourthly, Encourage the use of renewable energy and grow plants and trees. Fifthly, and on an individual level, we need to raise awareness regarding climate change and try to reduce pollution, the carbon footprint and single-use plastic bags.

Michael E Mann, a professor of Atmospheric Science, says the frequency of heat waves has tripled now from the 1960s and the frequency of record-breaking hot months has gone up to five times as compared to a scenario without climate change.

In the famous 2015 Paris Climate Agreement, that was signed by almost 200 countries, these countries had pledged that the temperature in the pre-industrial era, that is the time between 1850-1900, compared to then the countries would ensure that the global average temperature would not rise by more than 2°C. It would preferably be maintained at an increase of 1.5°C. The more the average temperature of the Earth increases, the more we’ll get to see these extreme weather events. With every increase of 1°C, very disastrous effects follow. According to Scientists, 95 of the increase in CO2 is because of human activities. In the last 70 years, the population all over the world has increased three times.

When I used to read about global warming as a child, I used to think, ‘What’s the big deal?’ Even if the temperature of the Earth increases by a degree or two, who’d care? It’ll only be two degrees more, it’ll still be bearable.’ But the reality is much more dangerous than this. Because with the rise of 2-3°C, the extreme weather events rise exponentially. Summers become very hot. The chances of a heatwave developing increase a lot. The tornadoes, floods and droughts, become exponentially more likely. And the biodiversity is harmed.

In fact, there are severe effects on the Earth with a steady rise in temperature. Compared to pre-Industrial levels, the temperature has already risen by 1.2°C. Nonetheless, if it rises to 2-3°C then conditions will be more severe and many places and countries will be unliveable. Moreover, this temperature rises to 4-8°C then the real apocalypse will start, many regions will be unliveable and further severe weather events will occur and many cities and countries will go under the water.

We can see flash flooding in Karachi, smog in Lahore, drought in Thar, short winters in KPK and now wrecking floods all across Pakistan. Limiting global warming to 1.5°C can’t just be an ambition, it’s an imperative.

This temperature rise is not equal in all parts of the Earth. Some places it is more, at others, it may be less. And Canada is a place where it is more than average. In 2019, the average temperature in Canada had increased by 1.7°C. The Middle East is getting hot at twice the world average. Between 1948 and 2016, there the temperature had already increased by 2.3°C.

A 2015 study found that in mountainous areas, above the height of 2000 metres, the effects of global warming would be felt more than at lower elevations. Climate change and global warming will be 75 percent faster there than lowlands. Before talking about solutions, let’s clear another misconception. For some people, this temperature of 49°C will not seem a big deal, especially for the healthy and fit. They can bear even 50°C if very healthy and fit, and even up to 52°C. However, temperature above 35°C can be deadly for all types of people in certain conditions.

This is the truth. Because humidity is a very important factor when talking about the temperature, and 35°C at 100% humidity can be deadly irrespective of how healthy and fit you are. When it is hot, all of us sweat. Sweating is our bodies’ way to keep us cool. The sweat evaporates due to the heat and so our skin remains cool. But if there is 100 percent humidity in the air, then the sweat will have nowhere to evaporate into as the air is already saturated with all the water vapour it can carry. So the evaporation will not take place and our body will not be able to cool itself.

Technically speaking, the term Wet Bulb Temperature is used here. It is the lowest temperature that can be achieved by evaporative cooling, A Wet Bulb Temperature of over 35°C is deadly. This is the reason why the 45°C of Dubai and Sibi, Pakistan, where there is dry heat with little humidity in the air, seems more bearable as than 40*C on the beaches of Kerala.

Scientists predict that in the coming years, due to climate change in some areas of the world, there will be Wet Bulb Temperature of over 35°C, literally deadly for human lives. Pakistan is an agricultural land and 50 percent of its population is agricultural based and it will have to decide that How Pakistan’s economic landscape will shape up post floods.

Some researchers from MIT developed an interesting simulator to show the rise in global average temperature by 2100, and how that temperature will react to various policy changes across the world in all countries. The conclusion from this is that the biggest impact is from Carbon Taxes.

When it comes to the solutions to fight against climate change, books often suggest turning off the lights in unoccupied rooms to stop wasting electricity or using bicycles instead of motor vehicles. Doing all these is definitely good.

But the problem is that all this information is quite outdated today. Had everyone been asked to practise these 20 years ago and had everyone done so, it might have made a difference. But for now, on an individual level, even if everyone starts following these little practices, it will have a negligible effect on climate change.

Today, the situation has deteriorated so much that only policy changes at the government level can bring about real change. Firstly, the subsidy on fossil fuels needs to be removed. Secondly, all the governments in the world need to push for electric cars. Irresistible incentives have to be given for the purchase of electric cars. Thirdly, they need to levy a Carbon Tax. So that the companies get motivated to use less fossil fuels. Fourthly, Encourage the use of renewable energy and grow plants and trees. Fifthly, and on an individual level, we need to raise awareness regarding climate change and try to reduce pollution, the carbon footprint and single-use plastic bags.

The industries creating most of the Greenhouse Gases are Construction, Transportation, Food industry, Energy.  There is a need to incentivise sustainable production and penalise excessive pollution. Government public policy must be affected

Providing adequate healthcare during these gigantic and unprecedented floods is a big challenge. There is a ‘Public health Crisis’ as flooding destroyed many hospitals, hHealth centres, health systems. While first aid, food, clean drinking water and shelter are the priority for all the affected.

Where is the aid to flood victims?

The entire nation is reportedly mourning the flood disaster in the country but this time it is a matter of concern for the whole...
Read more
Comment

From Monday to Friday, Pakistan delegation at UNGA presented the country’s case on key issues. In his speech before UNGA the PM also talked...
Read more
Editorials

After months of speculation, former Finance Minister Ishaq Dar, who has been in self-imposed exile in the UK for the past 5 years, is...
Read more

September 25, 2022
ISLAMABAD: Pakistan Railways was expanding the scope of China Pakistan Economic Corridor (CPEC) to explore the "Gateway of Prosperity" for both countries and the...