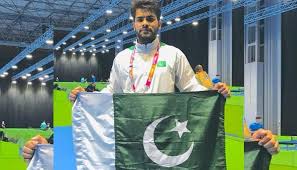 Hailing from a remote village of Chitral district, Khyber Pakhtunkhwa, Pakistan’s top ping pong player Fahad Khawaja has qualified for the round of 32 of men’s single table tennis competition by winning three consecutive matches in the Commonwealth Games-2022 (CWG) in Birmingham, the United Kingdom.

Talking to APP on phone, the jubilant Fahad Khawaja said he was proud to represent his motherland in the table tennis singles of the ongoing CWG.

In the final group match, Fahad Khawaja defeated Darren Douglas of Trinidad and Tobago. He won all three matches of Group No. 15 and qualified for the round of 32.

In the first match of Group 15, Fahad Khawaja defeated Guyana’s Christopher Franklin 4-0, while in the second match, he beat Bangladesh’s Mohtasin Ahmed 4-1.

His next very important match is against England’s world no. 74 Paul Drinkhall in round of 32 of men’s single table tennis, to be played at 4:45 pm PKT on Friday.

It merits mention that Fahad’s younger brother Ummam Khawjah, 17, who is currently ranked 2nd in Pakistan, missed the CWG for not being granted airfare by the quarters concerned. But Ummam has his name in the Pakistan team list for the Games and even the games management issued accreditation.

In the recently held National Table Tennis Championship both Fahad and Ummam reached the final and Fahad took the championship trophy while Ummam got the runners-up trophy as both were playing for Pakistan Wapda.

Since Ummam Khawjah was not granted airfare, the Pakistan table tennis team could not participate in double competitions. Although two athletes had participated in the Commonwealth Games-2018 held in Gold Coast, Australia.

When contacted dejected Ummam Khawjah, he said table tennis was being treated as a stepchild in Pakistan. “I hope things will go in favour of tennis in Pakistan, and I will be able to represent my country in the future events internationally.

Talented Ummam Khawjah was also honored by the International Table Tennis Federation who invited him to Doha, Qatar on a special flight and was given the title of “The Pearl of Asia” when he was just 12-year-old.

MANCHESTER, UNITED KINGDOM: Ryan Giggs is used to life in the public eye as a footballer who grew from a dazzling teenage talent at...
Read more
Sports

MOSCOW: The re-election of a Russian former deputy premier as head of the international chess federation was a "victory" for Moscow, the Kremlin said...
Read more
Sports