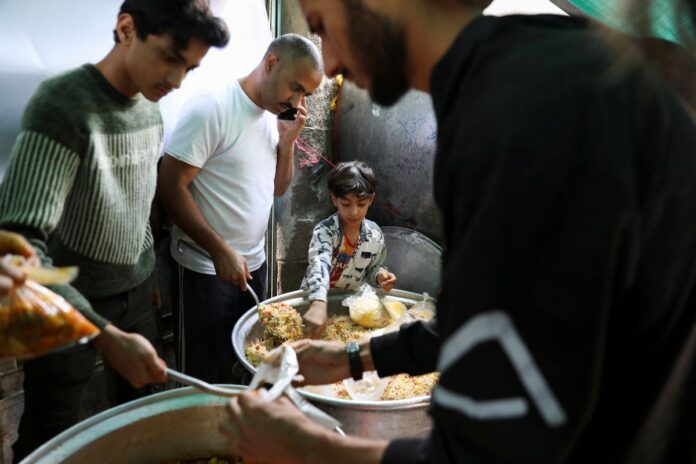 HAJJAH/AL MAHRA: A two-month ceasefire has given aid groups a chance to step up aid to Yemen’s hungry millions, but malnutrition ravaging children is projected to worsen if fighting returns or humanitarian funding does not pick up.

“The benefits of the first weeks of truce are already significant,” said Erin Hutchinson, Yemen Director for the Norwegian Refugee Council.

The group has been able to give aid to 12,000 people in one district of Hajjah province that has not been reached for more than three years.

More than seven years of conflict in Yemen have devastated the economy, displaced millions and pushed food prices out of the reach of many. Spiking global grain and commodity prices are adding further strain.

“Tens of millions of people in Yemen are living hand-to-mouth,” said Richard Ragan of the World Food Programme (WFP), which is trying to feed half of Yemen’s 30 million people in one of its largest-ever programmes.

Stunted and weakened by severe malnourishment, one-year-old Jiad Jalal’s skin is dry and wrinkled over his protruding skull, limbs and stomach.

Living in a makeshift displacement camp in Khadish, Hajjah, one of Yemen’s poorest regions, Jalal is one of 2.2 million children under five — including 538,000 severely malnourished — who will suffer acute malnutrition this year, according to pre-ceasefire UN estimates.

“We eat only what we can get from aid agencies. Wheat, beans and such items. If we don’t receive food, then some days we eat and other days we go hungry,” said his grandmother Zahra Ahmed.

“We are trapped between hunger and exhaustion. Look at the children,” she added, gesturing to tiny Jalal who they cannot afford to take to the capital Sanaa for treatment.

Hunger and malnutrition have worsened this year, the UN’s March data showed, and the body projected that between June and December those unable to secure minimum nutrition will hit a new high of 19 million, up from 17.4 million currently.

In al-Mahra, in Yemen’s east, women in a displacement camp of tattered shelters built outdoor fires to fry dough balls that children munch on, and pat bread into hot mud ovens.

“We adults, we have to be patient and go hungry to feed the children. If only you could see how sick I am, because I only feed my children,” said mother-of-ten Fatima Qayed.

She said they only get aid once a year during the Muslim fasting month of Ramadan and they buy food by collecting and selling plastic cans, rarely seeing meat.

“When I’m pregnant I barely eat, just tea and bread … After I give birth it’s the same thing; we have no chicken or anything. All I pray for is to hug my child after giving birth,” said Abdelhakim, 36.

UN Yemen Envoy Hans Grundberg this week said the two-month truce, which began on April 2 to coincide with Ramadan, was broadly holding with a “significant reduction of violence and civilian casualties”.

The truce, the first nationwide cessation of hostilities since 2016, includes a halt to offensive military operations, and allows fuel imports into areas controlled by the Iran-aligned Houthi group and some commercial flights to operate from Houthi-held Sanaa.

Yemen Airways this week said it would start operating return flights between Sanaa and Amman, Jordan from Saturday.

A military coalition led by Saudi Arabia, which intervened in March 2015 supporting Yemen’s government against the Houthis, controls Yemen’s seas and air space.

The ceasefire has allowed the WFP and commercial partners to increase milling and distribution work, the WFP’s Ragan said.

“(The truce) is good for Yemen but it’s also good for the humanitarian operations that are so desperately needed to get up and running,” he said, adding that WFP operations are 60-75 days behind schedule due to a previous escalation in fighting.

Should peace not allow Yemen’s economy to re-build, at least 80 percent of the country will continue to rely on humanitarian assistance.

But in March, the United Nations received only $1.3 billion for 2022, well short of the planned $4.27 billion. Additional pledges have since come from Saudi Arabia, the United Arab Emirates (UAE) and the EU, but funding remains precarious.

The WFP has since January reduced rations for 8 million of the 13 million people it feeds a month due to funding shortages.

KYIV: The Kremlin said on Monday it was in "sporadic" contact with the United States on nuclear issue, a day after Washington warned of...
Read more
World

BEIJING: After all delegates to attend the upcoming 20th National Congress of the Communist Party of China (CPC) were selected in Beijing. Officials introduced in...
Read more
World