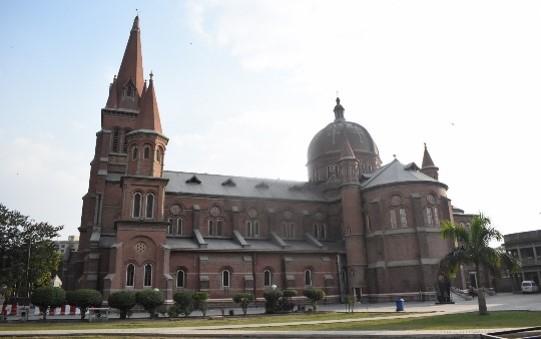 LAHORE: The Walled City of Lahore Authority (WCLA) has moved on to the conservation of religious sites throughout Punjab upon the directions of Government of Punjab, Auqaf Department and Human Rights & Minorities Affairs Department, Pakistan Today learnt here on Monday.
It was further learnt that the conservation of eight Muslim Shrines, one Hindu Temple and six Churches is being done by WCLA whereas the funding for the shrines is by the Auqaf Department and Human Rights & Minorities Affairs Department is providing funds to WCLA for the conservation of Temple and Churches.
According to the plans of WCLA, these projects will be completed by 2023 while it is pertinent to mention here that these sites will remain with the Auqaf Department and Human Rights & Minorities Affairs Department as WCLA is only the executing agency for conservation works.
According to the details provided by the official spokesperson of WCLA Tania Qureshi, Darbar Baba Farid-ud-din Ganj Shakar Pakpattan, Shrine of Hazrat Mian Meer, Shrine of Shah Husain, Shrine of Madhu Lal Hussain, Tomb of Baha-ud-din Zakriya, Tomb of Shah Rukn-e-Alam, Shrine Hazrat Shah Shamas, Shrine Hazrat Bibi Pak Daman and Shrine of Hazrat Khawaja Ghulam Fareed, Kot Mithan are being conserved by WCLA at present.
“WCLA is also conserving the Churches and one temple which are Shivala Mandir Sialkot, St.Francis Assai Sahowala Sialkot, Presbyterian Church Nicolson Road Lahore, St.Marry the Virgin Cathedral Church Multan, Christ Church Rawalpindi, Sacred Heart Cathedral Church Lahore and Cathedral Church of The Resurrection Lahore. These are being conserved by using international techniques of conservation and WCLA is putting its heart and soul in this process”, Tania said.
The Director Conservation and Planning WCLA Najam Usaqib said, “60% of the work at Catholic Church St. Francis Assai Sahowala, Sialkot has been done so far whereas documentation (3d scanning), sand blasting, chemical treatment, plinth protection, surface rendering and roof treatment is completed. Façade treatment and wood work are in process and will be completed soon.”
“Moreover 40% work is completed at Shivala Temple in Sialkot, 80% work is completed in Cathedral Church of The Ressurection at Mall Road Lahore and work has started on the other Churches too. The conservation and preservation of the Churches, Shrines and Temples will be carried out for the first time, as per the international standards of conservation,” Najam explained.
Najam said that work on Shrines in Lahore and other cities of Punjab had also been started and will be completed by 2023.
“We are improving the existing conditions of the shrines so that the zairin and people going there get better facilities and experience. It is our religious heritage and I am honored that the Auqaf Department has engaged WCLA for this task.”
“These works are being done as per the vision of Prime Minister of Pakistan to promote religious tourism and religious harmony in the country. It is great pride and honor for WCLA team that the Government of Punjab, Auqaf Department and Human Rights & Minorities Affairs Department has engaged WCLA as the executing agency for conserving these religious heritage sites in Punjab. This is need of the hour to save these religious heritage sites for the future generations”.
“This project is not only to conserve the monument and sites but also to serve the people as end users. This is one way how we can contribute to the cause of promoting religious harmony among the people and I must give credit to Auqaf and Minorities Affairs Department on taking this step and funding these projects,” Director General WCLA Kamran Lashari said.
Facebook
Twitter
Linkedin
WhatsApp
Email
Previous articlePunjab, GB CMs agree to further expand bilateral cooperation, promote inter-provincial harmony
Next articleAshes in the bag, next challenge for Australia is to conquer Pakistan