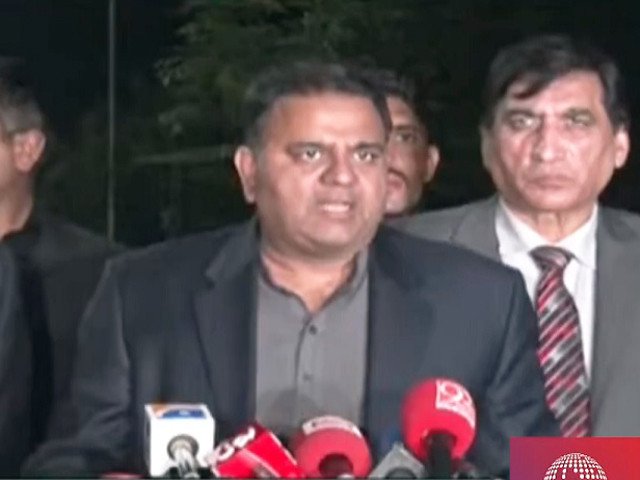 Information Minister Fawad Chaudhry stated on Tuesday that “religious extremist” political parties such as the recently unbanned Tehreek-i-Labbaik Pakistan (TLP) and the Jamiat Ulema-i-Islam would ultimately harm the country.

He further added that PTI was the only “national party” in the country.

Chaudhry while speaking to the media after a meeting of the federal cabinet, said that the recently concluded local government elections in Khyber Pakhtunkhwa did not come under discussion.

It is pertinent to note that Fawad was speaking to media a day after the PTI faced a major upset in the first phase of KP local body polls, while the JUI-F bagged the highest number of mayor/chairman seats.

The minister went on to state that the reason for the ruling party’s failure in the polls was “clear”.

“When three to four candidates from the same party contest the polls in the same constituency, then they will [inevitably] lose the election. This is what happened in most of the areas,” he said, adding that the party’s MNAs and MPAs were also not happy.

“Each constituency needs to be managed, and we lost most of the contests due to these management issues,” he said.

However, this just proves that the PTI is a national party, he said, adding that the rest were merely “local parties”. “If the PTI did not exist then there would be no national party in the country.”

While talking about the JUI-F, he said that the party had ruined the education and finance sectors in KP in 2002. “It is unfortunate that, due to our mistakes, such a political party has been noticed [by the people],” he said.

He further said that the rise of “religious extremist parties” such as the TLP and JUI-F would ultimately harm the country.

Pakistan will be affected if the PTI faces setbacks and such “political dwarfs” get the chance to step into the limelight, he said, adding that PTI leaders needed to strengthen party chief Imran Khan. “Without Imran Khan, politics in Pakistan will scatter into pieces.”

The minister said that the PML-N and the PPP no longer had any standing in the political arena, reiterating that the PTI was the only national party.

He expressed the hope that the party’s leadership will learn from the current situation.

Responding to another question from a reporter, he said that he was “disappointed” at the fact that the JUI-F had bagged the highest number of seats in the first phase of local government elections in KP.

“Such parties are a sign of a retrogressive society and a sign that things in the country are not fine. It is not a reassuring thing for society when people who are against women’s rights, against [basic] freedoms […] come into power,” he said.

Earlier, Prime Minister Imran Khan stated that his party “made mistakes” but asserted the ruling party will emerge “stronger” in the second phase.

Provisional results of the first-ever local government elections in the border province following the 2018 merger of tribal districts showed the PTI losing ground to the opposition parties — especially rival Jamiat Ulema-i-Islam-Fazl (JUI-F) that managed to grab 15 seats, the highest, of mayors/chairmen in Sunday’s elections for 63 tehsils.

The results of 39 tehsils declared by the Election Commission of Pakistan (ECP) Monday showed the hardline party also gave a stiff competition in many other tehsils where its candidates stood as runners-up.

In Peshawar alone, the JUI-F stunned the PTI by securing a definitive lead in the contest for the prized office of the city mayor. Its candidate Haji Zubair Ali secured 62,388 votes against 50,659 secured by Rizwan Bangash of PTI.

“Wrong candidate selection was a major cause” of defeat, the prime minister said. He also announced to personally oversee the party’s election strategy in the second phase of elections, and subsequent local government polls across Pakistan.

The voting was postponed in three tehsils — located in Swabi, Bannu and Darra Adam Khel — due to disturbances, including an explosion in Bajaur, purported abduction of polling staff in Bannu, a clash in Karak and a mob attack on the car of Minister for Science and Technology Shibli Faraz in Kohat.

An additional 500 youth and 154 minority candidates were also declared successful.

Stringent security arrangements were adopted. 77,000 policemen and law-enforcement personnel were deployed outside polling stations and booths for the security of voters.

CCTV cameras were installed at sensitive locations and it was prohibited to carry weapons or electronic devices in all polling stations.

676 candidates contested for 65 seats of the city mayor and tehsil chairperson. Pakistan Tehreek-i-Insaf (PTI) is the only party that fielded candidates for all 65 seats.

Every voter was allowed to cast six votes, the colour of the ballot paper was different for different seats, the white ballot paper was used for city mayor/tehsil chairman. Silver colour had been allotted for the general seat of the neighbourhood/village council.

Local government elections in 35 districts were scheduled to be held in two phases.