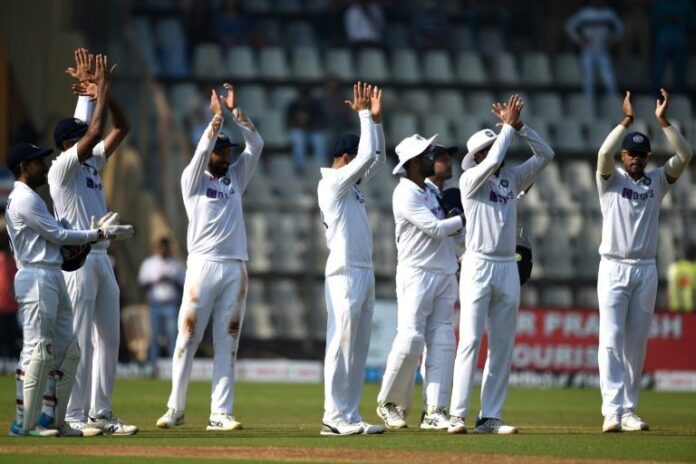 MUMBAI: India hammered New Zealand by 372 runs to win the second Test on Monday, after the Black Caps’ Mumbai-born spinner Ajaz Patel took the plaudits with 10 wickets in the first innings.

Top-ranked New Zealand, who started day four on 140-5 in their chase of an improbable 540, were all out for 167 before lunch in Mumbai.

Ajaz, a left-arm spinner whose name went up on the Wankhede honours board on Saturday after his perfect 10, stood out with match figures of 14-225 — the best ever by a bowler against India.

But New Zealand, who hung on for a draw in the opening match, were undone by their batting. They collapsed to 62 all out in their first innings and were never in the chase against India’s spin force.

Ashwin, who struck three times in the final session on day three, sent back overnight batsman Henry Nicholls stumped for 44 as the final wicket to record his 300th scalp on home soil.

Jayant Yadav bowled Rachin Ravindra for 18, then struck twice in one over and returned career-best figures of 4-49.

Daryl Mitchell, who top-scored with 60, was the only bit of resistance for the tourists during his fourth-wicket stand of 73 with Nicholls on Sunday.

Indian opener Mayank Agarwal made 150 in India’s first-innings total of 325 and then top-scored with 62, with the hosts declaring at 276-7 on day three.

His 14 wickets against India surpassed England fast bowler Ian Botham’s 13-106 in Mumbai in 1980.

Ajaz’s 10-119 in the first innings brought him into an elite company alongside two other bowlers including England’s Jim Laker (1956 v Australia) and India’s Anil Kumble (v Pakistan in 1999).

But his effort was part of a losing fight.

He nevertheless had a memorable homecoming including taking the big wickets of Cheteshwar Pujara and home skipper Virat Kohli — who returned to the team after he stepped down as national Twenty20 captain and had a short break — for ducks.

The 33-year-old Ajaz, who moved to Auckland from Mumbai with his parents in 1996, has claimed 43 wickets for New Zealand in 11 matches since making his debut in 2018.