Police had refused to handover blasphemy suspect to mob 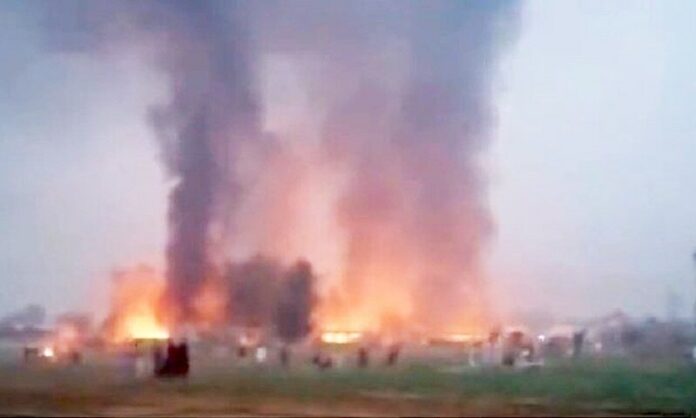 CHARSADDA: An angry mob attacked and set on fire a police station in Charsadda district of Khyber Pakhtunkhwa on Sunday as police refused to handover a man arrested for allegedly desecrating the Holy Quran.

per media reports, the police had arrested a man for allegedly desecrating the Quran and shifted him to the Mandani police station in Charsadda’s Tangi tehsil.

However, the police managed to shift the suspect to a safe location.

Locals said the situation was still tense in the area and the mob had now staged a sit-in at Harichand Road.

According to the witnesses, local religious leaders also reached the site of the sit-in, calling for calm. Police did not confirm any casualties in the violence.

Earlier, Charsadda police spokesperson Shafiullah Jan confirmed that a mob had attacked the police station and that the situation was tense in the area. He added that police were trying to control the situation.

Eyewitnesses said the police had used tear-gas shelling and aerial firing to disperse the mob.

An official said that the police station had been completely destroyed, adding that a number of vehicles and police records had also been lost to the fire.

The mob also attacked and set ablaze a police check post on Harichand Road and also blocked the road for traffic, the police official maintained.