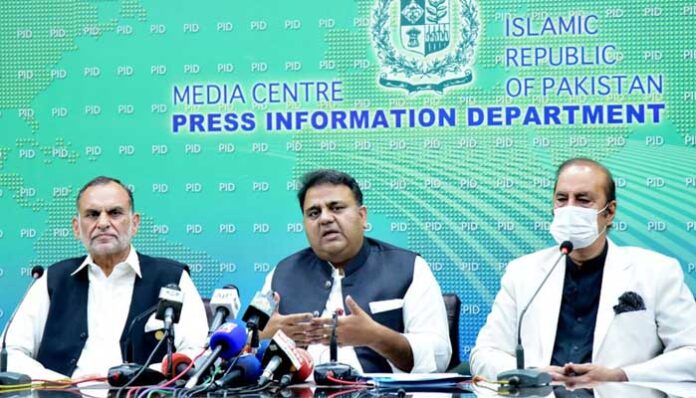 Information Minister Fawad Chaudhry has alleged that the Election Commission of Pakistan has “become the headquarters for opposition parties”, further accusing the the chief election commissioner of “acting as their mouthpiece”.

Addressing a press conference in the federal capital on Friday while flanked by Minister for Railways Azam Khan Swati and Adviser to the Prime Minister for Parliamentary Affairs Babar Awan, Fawad said that no one is satisfied with the ECP because “it comes up with strange logic.”

The federal minister maintained that it was due to this so-called logic that the ECP was marred in controversy in spite of the federal governments attempts to make the election process free, fair and transparent.

He stated the opposition was attempting to make amendments around the use of electronic voting machines “controversial”. Fawad also reiterated that the Pakistan Tehreek-e-Insaf has repeatedly called on the opposition to have a dialogue over electoral reforms, but have been ignored each time.

“Our Opposition comprises intellectually-stunted parties. The only skill they have is to seek extensions for the hearings of their court cases.”

Speaking about the incorporation of technology into the electoral process, Chaudhry said that even the Supreme Court of Pakistan endorsed it to ensure transparency.

During the presser, Senator Babar Awan said that the bill on electoral reforms was passed in the National Assembly after eight months but the Opposition did not present a single suggestion throughout this period.

“The opposition has become the enemy of electoral reforms as they want to maintain the status quo,” Awan said.

Moreover, the bill had to be passed by the Senate in 90 days but it was rejected only a few hours before the conclusion of the stipulated 90-day period, he said.

“It is for the first time in history that the Senate committee bulldozed the government’s legislation,” he said.

“We have now decided to take the bill to the joint session of the Parliament on September 13 and will convene a National Assembly session a day after that.”

Awan said that the government will soon complete the legislation under a Supreme Court order.

Earlier during a senate committee meeting, Azam Swati accused the Election Commission of Pakistan officials of taking bribes to rig polls, saying the such institutions should be “set on fire”.

The above was said during a meeting of the Senate Standing Committee on Parliamentary Affairs, wherein the committee rejected the amendment proposed by the government to install electronic voting machines in the next elections in order to ensure they are free and fair.

The committee, which met with Senator Taj Haider in the chair, also rejected the amendment proposed for open balloting in Senate elections and the introduction of e-voting for the overseas Pakistanis.

The debate on the burning issues relating to the holding of general elections was not passed without incident as participants leveled allegations against each other and later staged a walkout from the meeting.

Election Commission of Pakistan officials walked out of the meeting after Railways Minister Azam Swati leveled serious allegations against the ECP officers of taking bribes.

The opposition senators said that Swati cannot accuse a constitutional body of taking bribes, and asked the senator to bring forward proof to back his claim.

Swati then added that such institutions conduct all elections through rigging and should be burned down. At this, the ECP officials walked out of the meeting in protest.

After the meeting was disrupted, Senator Farooq H Naek lashed out at Swati, saying that the ECP should be removed from the Constitution and the government should conduct the elections itself.

“Whenever the ECP tries to become independent, the government start to have a problem with it,” added Senator Azam Nazeer Tarar.

Advisor to the Prime Minister on Parliamentary Affairs Dr Babar Awan said the government will not decide which machine will be used for voting. “This will be decided by the election commission,” he said. “The Ministry of Parliamentary Affairs wrote a letter to the ECP, asking whether it needed a budget.”

“The ECP did not respond to the letter,” he lamented.

Senator Mustafa Nawaz Khokhar and Azam Swati also exchanged hot words, with the PPP senator asking the minister about the alleged bribe. “Azam Swati should tell us who paid bribes to the ECP?” he asked. “Was it the PPP or the PML-N?”

A defiant Swati stuck to his guns, saying that he had said nothing wrong.

Babar Awan earlier told the committee that the government would respond to the Election Commission of Pakistan’s objections to the use of these machines.

Senator Farooq H Naek, on the occasion, urged the committee members to leave the matter here and discuss other matters.

Senator Taj Haider said that the strength and continuity of democracy in a certain country depended upon effective electoral laws. “Therefore, the government should address the concerns of the ECP regarding the electoral reforms,” he emphasised.

Babar was of the view that the media was creating a negative impression about the EVMs. “Therefore, the government should get an opportunity to clarify its stance on the subject,” he added.

Later, Senator Taj Haider presented an amendment about EVMs for approval. Azam Swati protested against Haider, accusing him of not allowing Senator Samina Mumtaz to cast her vote. “You are not taking our lawmaker on line so that she can cast her vote,” he said. “We are walking out in protest,” he added, and representatives of the government left the meeting.

The committee proceeded to vote on amendments to the Election Act in their absence. The committee shot down the use of electronic voting machines and also rejected an amendment relating to the I-voting of overseas Pakistanis.

The PML-N President Shehbaz Sharif lashed out at the government, saying that while the PML-N had called over 100 meetings on electoral reforms when it was in power, the government couldn’t handle one. “Their consultations [amount to] imprisoning the Opposition when they ask questions and silencing the media,” he tweeted.

He wondered how a government that does not demonstrate seriousness during a consultative meeting, be expected to take concrete decisions on electoral and administrative reforms.

“ECP officials walking out [in protest] over the ministers’ attitude tells us of the government’s attitude,” he said. “How can a government that is unable to answer members of a committee logically expect us to put faith in its legislation and claims?” he wondered.

Sharif said the government does not have any answer to the logical, comprehensive, solid and technical reservations pointed out by the ECP on the EVMs.

He regretted how the government had “bulldozed” bills in the National Assembly a few months ago and today, forced the ECP members to walk out of a committee meeting.

“The government does not have reasoning to promote electronic voting, it only has threats,” he said. “On rejecting the idea of EVMs, the government has resorted to threatening the ECP,” he added.

In her tweet, Maryam Nawaz said the PML-N did not assail the institutions rather if criticised those negative elements who are hiding in these institutions. “Nobody is here to challenge the government as it is talking about burning down a while institution,” she added

Meanwhile, Babar Awan criticised the chairman of the Senate committee for not allowing a government member to vote during the meeting. “Senate Parliamentary Committee chairman has deprived Senator Samina Mumtaz of exercising her right of the vote after which the government members walked out of the meeting,” he tweeted.

He said that the Opposition has been exposed after it voted against the EVM and overseas Pakistan’s right to vote. “We will get both the bills approved from the joint session of parliament,” Babar Awan said.

On Friday, the Election Commission of Pakistan submitted a four-page letter to Taj Haider, the chairman of the senate’s standing committee on parliamentary affairs, which expressed its reservations regarding the proposed election amendment bills.

The ECP stated that it endorses the introduction of new technologies in the electoral process but has concerns about the process being pushed in “haste”. “The Commission, while in favor of technology, believes that the technology to be used must be secured and sufficiently tested,” the letter argued, adding that the EVM should be subject to massive testing by procuring the machine on a small scale for a pilot project first.

The ECP also proposed that the selected machines be used in local government elections, by-elections and a few constitutions in the next general elections first and then on a large scale.

It further highlighted that with the usage of machines, elections will have to be held in a staggered manner rather than in a single day, which will require legal amendments.

“EVMs are offered as a defence against ballot stuffing and altering results,” the letter noted, “EVMs will not counter all types of frauds and open up the possibility of other more sophisticated types of fraud and manipulation of software and hardware.”

The Commission also insisted that the Senate committee takes into consideration the cost of EVMs. If a separate machine is used for the national assembly and the provincial assembly then at least 900,000 machines will be required for approximately 100,000 polling stations and 400,000 polling booths. “The system would cost an estimated Rs150 billion,” it added.

The Senate body also took up for discussion about the inclusion of newly elected senator Samina Mumtaz Zehri in the committee.

Senator Haider said there were rules and principles for the formation of parliamentary standing committees. “Every party gets representation in these committees as per the ratio of their strength in an assembly,” he said, adding it was unwise to include Senator Samina in the committee.

Still, he went on to add, if he found faults with the Senate chairman’s decision, it would not be appropriate. “Hence, I retain Senator Samina’s membership of the committee,” he announced.

Senator Naek remarked that he and other PPP senators would support only those decisions of the Upper House chairman which were aimed at strengthening democracy in the country. “I ask the chairman not to flout the rules,” he said, and added that PPP’s struggle was for the supremacy of the constitution.