Electronic voting machines – Why and why not

There are lots of doubts 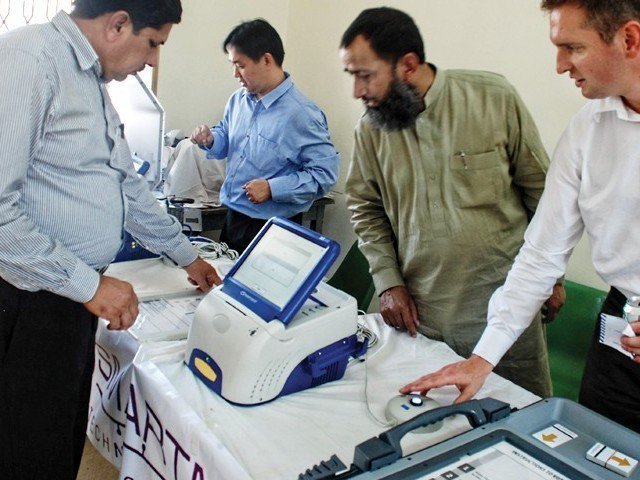 The Opposition’s sit-in campaign after the 2013 election and emphasis to open four constituencies, three of which they lost in re-election, for thorough investigation as a litmus test to determine irregularities in general elections, opened several dimensions for future electoral reforms. Extensive agitation inculcated widespread desire for transparency and verifiability of election results. We can hardly find an individual who is not disturbed with controversies surrounding our general elections. People with interest in political activities started discussing loud and clear after the 2014 sit-in campaign to find solutions to eliminate election manipulations. Adoption of technology remained the main argument of deliberations to counter such malpractices.

However, the malfunctioning of RTS (Results Transmission System) in 2018 led to common suspicions and raised questions about the reliability of technology-based interventions in the general elections. A sizeable segment of the society considers the collapse of RTS as a design to alter results of the election. That failure steered ephithets by the opposition parties such as “selected” and “najaiz”, which undermines the legitimacy of the current government. Controversy between NADRA and the ECP on the RTS or RMS (Result Management System) flop coupled with alleged forcible expulsion of polling agents from polling stations of two mainstream parties during the vote count mounted doubts and strengthened common belief about election manipulation. Managing technological interventions to manipulate election results was a new learning for the common man because other forms of rigging, pre-poll and on the day of polling, were all known realities.

Now the government’s  extraordinary emphasis on introducing EVMs (Electronic Voting Machines) for the coming elections raises several questions. Are we prepared to adopt EVMs despite our failure in managing a simple app like the RTS? What are the outcomes of developed countries that are already using EVMs? Who will develop EVMs and what will be the role of the ECP in developing EVMs? What will be the process of accreditation of EVMs including the software? What will be the mechanism to deal with 21st century security threats to machines such as EVMs? What will be the legal framework to deal with every aspect of operations of EVMs, including security requirements?

Our government can cultivate consensus on EVMs by engaging civil society, media and independent IT experts. It is also important to ensure transparency during all stages of developing EVMs to eliminate doubts of the masses. We also need a public testing and certification report of our EVMs for wider credibility. We also need to develop a credible legal framework to deal with every aspect of operations of EVMs including security requirements. Therefore, it is important to take informed decisions with patience to avoid any disaster due to hasty choices

According to The New Yorker, James Clapper, the former director of US National Intelligence “and other intelligence officials produced—and shared with Trump—a postelection report confirming an extensive cyberattack by Russia on 2016 US elections”. Intelligence Committee chairman, Richard Burr, a Republican, has already declared, “What we cannot do, however, is calculate the impact that foreign meddling and social media had on this election.” Joel Benenson, Hillary Clinton’s campaign pollster, said, “A global power spoiled our elections, every American should be outraged, whether it changed the outcome or not. But did the meddling alter the outcome? How will we ever know? We probably won’t, until some Russians involved in it are actually prosecuted— or some Republican, in a moment of conscience, talks.”

If this is the level of helplessness of the scientifically most advanced nation of our times to determine technological interference, how can we rely on our capacity to handle any meddling from across the borders? Secret agencies of two countries don’t miss any opportunity against Pakistan. Secret agencies of one of these countries are quite capable of causing significant damage as happened recently through the Pegasus spyware around the globe. We can become rolling stones in the hands of these countries; they will have a convenient tool in their hands to steer chaos in our society.

In 2006, the “We do not Trust Voting Computers” movement in the Netherlands resulted in withdrawal of all forms of e-voting. Advocates of the movement demonstrated through a recording that, “experts were able to replace a memory chip in the voting machine in less than five minutes that allowed them to manipulate the results of an election”. Even if we utilize non-reprogrammable hardware, we cannot rule out the hacking of software, as reportedly happened in the 2016 US elections and in the several conspiracy theories surrounding 2020 presidential elections.

In 2004, the Irish government decided not to use voting machines in European Parliamentary elections. According to Cameron Arcand, a political commentator, “Elections Canada wanted to assure Canadian voters that they should not have the same concerns Americans have regarding election integrity”. Election Canada tweeted on November 17, 2020, “Elections Canada does not use Dominion Voting Systems. We use paper ballots counted by hand in front of scrutineers and have never used voting machines or electronic tabulators to count votes in our 100-year history.” Cameron Arcand further stated, “Dominion’s election system is a voting and vote-tabulating software that is used in more than 30 states. There have been claims that the software glitched during the election, causing votes for President Donald Trump to switch to votes for former Vice President Joe Biden. However, Dominion website categorically denies false assertions about vote-switching issues with their voting systems”

According to Kim Zetter, a contributor to Politico, “On November 6, 2016, the Sunday before the presidential election that sent Donald Trump to the White House, a worker in the elections office in Durham County, North Carolina, encountered a problem. When the problem persisted into Monday, just one day before the election, the county worker contacted VR Systems, the Florida company that made the software used on the county’s computer and on the poll book laptops…. laptops were ready to use when voting started Tuesday morning. Almost immediately, though, a number of them exhibited problems. Some crashed or froze. Others indicated that voters had already voted when they hadn’t.”

Convenience, transparency, verifiability and auditability are the requirements for modern electoral systems. Countries having contemporary democracies strive to fulfil these requirements from pre-poll preparations to post-polling verifications and audits. However, it is evident that solutions available so far in different countries are developed by other than the regulators and remain highly susceptible to glitches. Therefore, if we desire to fulfil these requirements, we need to foster the capacity of ECP to develop both components of EVMs (hardware and the software) strictly under the control and supervision of the Commission. Otherwise, we will be subject to several complications that eventually may harm the entire political system due to our highly charged environment.

Our government can cultivate consensus on EVMs by engaging civil society, media and independent IT experts. It is also important to ensure transparency during all stages of developing EVMs to eliminate doubts of the masses. We also need a public testing and certification report of our EVMs for wider credibility. We also need to develop a credible legal framework to deal with every aspect of operations of EVMs including security requirements. Therefore, it is important to take informed decisions with patience to avoid any disaster due to hasty choices.