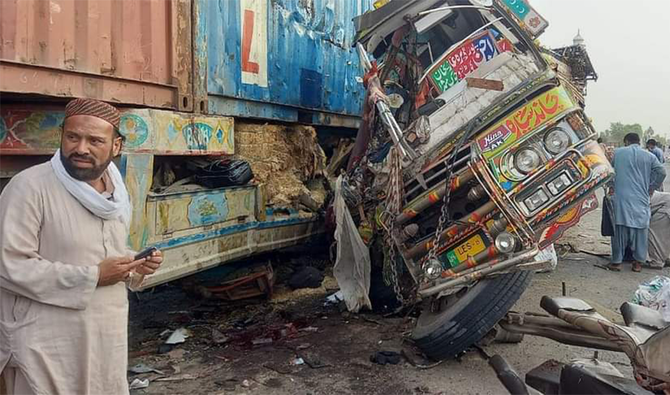 DERA GHAZI KHAN: Thirty four people were killed and 36 others got injured when an over-speeding bus rammed into a truck near Taunsa Bypass on Monday.

The bus was on its way from Sialkot to Rajanpur. The injured and the dead were shifted to DHQ Hospital Dera Ghazi Khan.

According to the hospital management, four of the injured were in a critical condition.

Referring to the tragic traffic accident of Dera Ghazi Khan, the minister, said in a tweet that violation of traffic rules is fatal and public transport drivers should take extra care while driving to protect people’s lives.

Interior Minister Sheikh Rasheed expressed his sorrow over the deaths in the accident. He said the incident was nothing less than a “calamity” for people going back home for the upcoming Eid-ul-Azha holidays.

“May God raise the dead to a higher level in Paradise [and] give the family the courage to bear the trauma,” he tweeted.

Punjab Chief Minister Sardar Usman Buzdar also expressed grief over the loss of lives in the accident and extended condolences to the bereaved families.

He said in a message on Twitter that the injured were being provided the best medical treatment and strict action would be taken against persons due to whose negligence the accident had taken place.

Special Assistant to Punjab Chief Minister Dr Firdous Ashiq Awan said the incident was very sad and tragic. “The heart is aggrieved at the loss of precious lives in the accident. The Punjab government shares in the grief and pain of the victims’ families in this hour of grief,” she tweeted.

She said that an emergency had been imposed in the hospitals and the injured were being provided with the “best medical treatment facilities”, with Punjab CM himself supervising all matters.

“Report of the incident has been sought. The perpetrators of negligence in the accident will be brought to justice,” she added.

Opposition Leader in the National Assembly and PML-N President Shehbaz Sharif tweeted, “Deeply pained & heart-broken at the tragic loss of precious lives in a road accident in DG Khan. Can’t imagine the anguish the affected families should be going through. May Allah give them Sabr! They are in our thoughts & prayers. Inna Lillah e Wainna Elahi Rajioon!”

ISLAMABAD: The parents of the prime suspect in the murder of the daughter of a former ambassador on Tuesday moved a bail petition in...
Read more
- Advertisment -

July 27, 2021
ISLAMABAD: A 19-year-old boy has become the youngest person to summit K2, the world's second-highest mountain, the Alpine Club of Pakistan said on Tuesday. Shehroze...