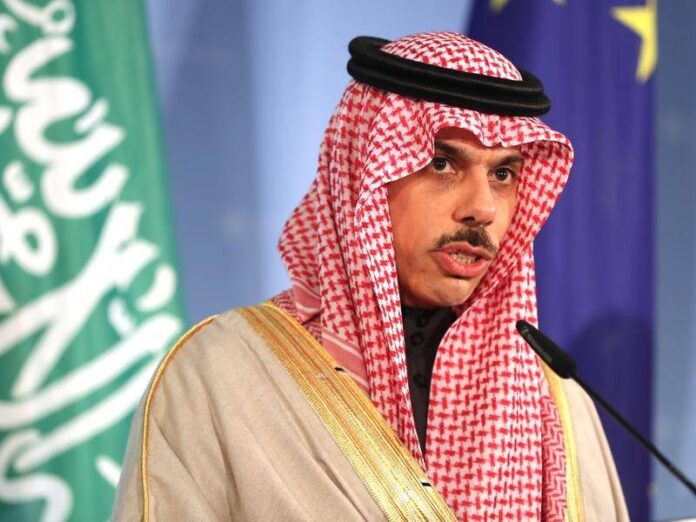 In an interview with Pakistan Television, Al-Saud said Saudi Arabia and Pakistan are jointly working on various challenges, including Islamophobia, facing the Muslim community.

The announcement was also made during a meeting between Crown Prince Mohammed bin Salman and Prime Minister Imran Khan in Jeddah.

Appreciating Pakistan’s role in countering Islamophobia, he said the Organisation of Islamic Cooperation (OIC) is an important platform to take up the issue.

The interview comes as the prime minister is on his seventh visit to the Kingdom since his August 2018 election. There, he was given a warm welcome by Saudi officials in the western coastal city of Jeddah.

The two governments on Saturday signed several agreements and vowed to reset ties strained by months of disagreement over policy on the Kashmir dispute.

Regarding the visit, Al-Saud said it will further strengthen brotherly ties between the two nations. He also acknowledged Imran’s vision for regional peace and prosperity.

The top Saudi diplomat commended the role of Pakistan nationals abroad in the development and progress of the kingdom.

He said the best facilities are being provided to the Pakistani workforce in the Kingdom as per local regulations.

He said more career opportunities were being made available to Pakistani workers in the Kingdom and Riyadh will welcome more talented labour from Pakistan.

He also urged investors to take advantage of the investment opportunities available in both countries.

To a question about the environmental challenges, Al-Saud said Saudi Arabia is focused on tackling the issue of climate change and also stressed joint efforts in this regard.

In response to another question, he said peace in Afghanistan is imperative for regional stability.

During the visit, the two governments also reaffirmed ​their full support for “all the legitimate rights” of the Palestinians, especially their right to self-determination and establishment of their independent state with East Jerusalem as its capital.

The reaffirmation was made during a meeting between the crown prince and the prime minister in Jeddah, according to a joint statement released by the Ministry of Foreign Affairs.

“​In the constructive spirit of discussions, the two sides reaffirmed their full support for all the legitimate rights of the Palestinian people, especially, their right to self-determination and establishment of their independent state with pre-1967 borders and East Jerusalem as its capital, in accordance with the Arab Peace Initiative and relevant UN resolutions,” the statement read.

They also agreed two memorandums of understanding on combating drug trafficking, and on financing energy, water, and infrastructure projects.

“During the meeting, it was agreed to further strengthen, deepen and diversify the existing bilateral political, economic, trade, defence and security ties,” a statement said.

“The talks were marked by exceptional cordiality and a commitment to fortify the upward trajectory in the bilateral relationship,” it added.