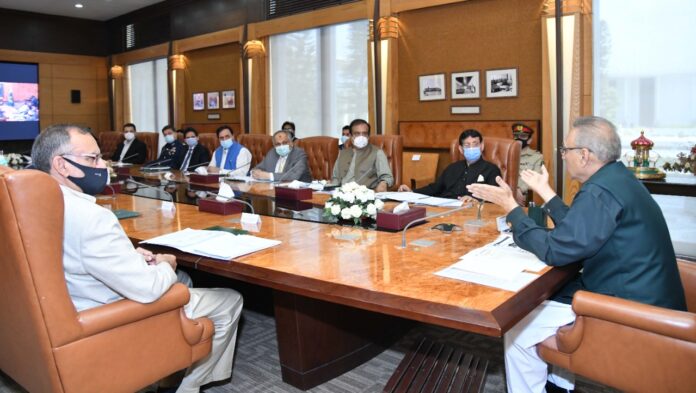 ISLAMABAD: President Dr Arif Alvi on Thursday asked the Ministry of Science of Technology and other concerned organizations to expedite the process of developing Electronic Voting Machines (EVMs) with advanced security features to ensure transparency in the electoral process.

He underscored the need for introducing an e-voting system in the country which, he said, would not only facilitate overseas Pakistanis but would also improve the efficiency and various other aspects of the electoral process.

The president made these remarks while chairing a meeting of sub-committee on Emerging Technologies on e-voting, here at Aiwan-e-Sadr.

Federal Minister for Science and Technology Senator Shibli Faraz briefed the meeting about the measures taken by his ministry with regard to the manufacturing of EVMs.

He informed that COMSATS, the National Institute of Engineering (NIE) and National Radio and Telecommunication Corporation (NRTC) were jointly working to produce a prototype of EVM which would be ready shortly.

The president stressed the need that the security of the equipment and various processes involved have to be fool-proof, user-friendly and transparent to ensure credibility of the entire electoral process.

The meeting agreed that NADRA would facilitate e-voting under the umbrella of ECP.

It was also agreed to hold meetings on weekly basis to review the progress on e-voting and EVMs. The president appreciated the efforts of M/o Science and Technology for developing a prototype of EVM.