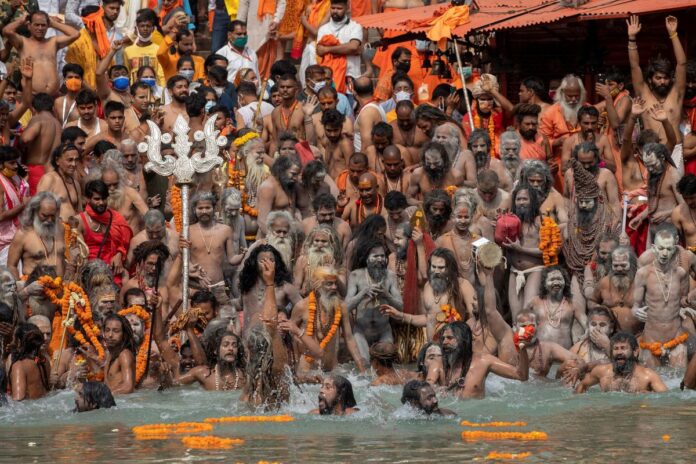 NEW DELHI: Indian Prime Minister Narendra Modi on Saturday appealed to devotees to keep a key Hindu festival symbolic, amid worries about the spread of COVID-19 infections as the country reported more than 200,000 new cases for a third straight day.

Criticism has mounted over the Indian government’s handling of the health crisis, as religious festivals and election rallies continue despite reports of shortages of hospital beds, oxygen cylinders, and vaccination doses.

India reported 234,692 COVID-19 infections over the last 24 hours, taking the total number of cases to nearly 14.5 million, second only to the United States.

After hundreds of thousands of ascetics and devout Hindus gathered for several days along the banks of the Ganges for a religious festival Kumbh Mela, Modi on Saturday called for restraint, saying on Twitter the festival should now be kept “symbolic”.

Responding to Modi’s appeal, one of the religious leaders Swami Avdheshanand urged devotees to not gather in large numbers. Devout Hindus believe bathing in the holy Ganges absolves people of sins, and during the Kumbh Mela, brings salvation from the cycle of life and death.

Those returning to Mumbai in western Maharashtra state from the Kumbh Mela will have a quarantine in hotels, Mumbai’s mayor Kishori Pednekar said. Maharashtra accounts for a quarter of India’s coronavirus cases and is the worst-hit region.

Experts have warned about the spread of more contagious variants of the disease, especially during large-scale gatherings for religious festivals and political rallies.

On Saturday, Modi was scheduled to hold two rallies in eastern state of West Bengal where state polls are ongoing. In recent weeks, such rallies have attracted thousands of people, few of whom follow COVID-19 safety protocols.

“Stop spreader rallies,” the Times of India said in an editorial on Saturday, adding: “Business as usual is an unaffordable luxury until this virus is conclusively tamed.”

India’s daily COVID-19 vaccinations have slowed from their record high early this month and many state governments have requested more doses.

Federal Health Minister Harsh Vardhan assured states there were no shortages and 11.6 million doses would be made available in a week, adding that 125 million doses have already been administered.

Some state governments in India have raised concerns over hoarding and black marketing of anti-viral drug Remdesivir.

Nawab Malik, a minister from Maharashtra, accused Modi’s federal government on Twitter for restricting Remdesivir supplies to the state. A minister in Modi’s cabinet, Mansukh Mandaviya, denied the allegation, saying adequate supplies were being arranged.

After imposing one of the world’s strictest lockdowns for nearly three months last year, India’s government relaxed almost all curbs by the beginning of 2021, although many regions have now introduced localised restrictions.

“This is Narendra Modi’s biggest crisis yet. It is bigger than any security threat, external or internal, or even the economic attrition of 2020,” editor and political commentator Shekhar Gupta wrote in a column on Saturday.